By Shay
We haven't sent anyone to the New England Metal and Hardcore Fest since 2002 (read about that here). Where have the last ten years gone? No clue. But this year, we wanted someone to go, and as luck would have it, our writer Shay wanted to go. Done and done.

A couple weeks ago I hopped on a red eye flight to Worcester, MA for the 14th New England Metal and Hardcore Fest. Besides this town being incredibly boring, having a stupid pronunciation for their name, and the closest liquor store to the venue being way too far, this was one of the best weekends of music I've ever experienced. 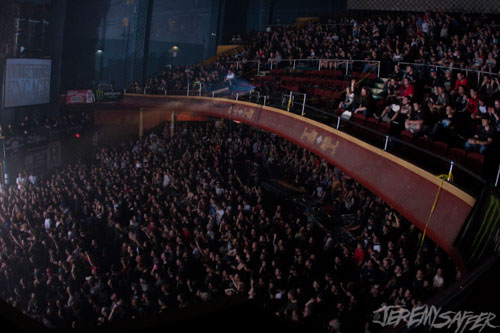 This was my first time at the Palladium and my first time at NEMHF, so I didn't really know what to expect. I was pleasantly surprised; the lineup was insane, security wasn't a group of elitist dickheads (for the most part), and the entire festival just seemed to be really well organized. Scott Lee, the Boss Man, I commend you.

My NEMHF weekend started out first thing interviewing Trevor Strnad from The Black Dahlia Murder, what a way to kick things off! To be completely honest, BDM is not a band that I was into, but I respected them as musicians. I actually watched their set and they absolutely killed it. They definitely gained me as a fan. "Miasma" made me want to sacrifice something.

Right before Black Dahlia was The Acacia Strain. Holy shit. Words cannot describe my disdain for that band. I think they're terrible. "3750" and "The Dead Walk" were cool, everything else sucks. I'm not even going to go down that road for fear of a scornful transgression followed by a ton of hate mail. I like Cockpunch! and that's as close as I get to a fan of TAS.

Earlier I saw Oceano (below) and they just rule, so much passion in that band. I hope for the sake of urban clothing that this band sticks with it and stops screwing around by breaking up and whatnot. 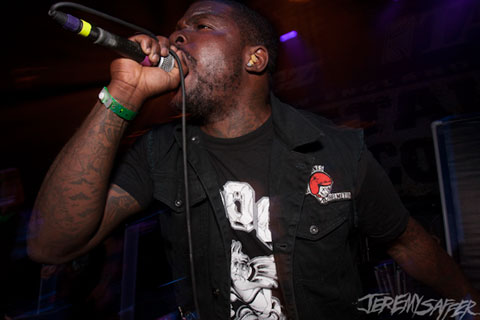 Molotov Solution completely slayed the main stage. What's great about this band is that they just get it. Their lyrics speak about current events, they support other bands and love the music, and they put on a killer live show. I really hope Molotov hits the big time soon because they deserve it.

I had the chance to see some Reign Supreme on the first day who never lets me down. Regardless of their controversial switch to Mediaskare Records, that band is still flawless and I can't wait for their new record.

Honorable mentions for Friday go to FocusedXMinds, This Is Hell, and Lionheart.

Day Two was awesome because I got my hardcore fix. Apart from a couple interviews, I didn't leave the second stage all day. 100 Demons was just banger after banger; definitely one of the best bands of the weekend. If you ever get a chance to see that band live, DO IT. Try not to go to jail because this band will make you want to murder someone; this pit legitimately scared me.

Cruel Hand is also a top notch hardcore band in my book. During "Cruel Hand" I was pitting in my head. They're just too good and I've never seen them put on a bad show.

I also caught Rotting Out, which was rad. They're a band from my hometown so I've seen these guys many times, but their live show never gets old. Fast, tight, and fresh, this band is glorious. Walter [Delgado] is the man; everything that guy does just rips (Alpha and Omega, Minority Unit).

Expire is so good- don't sleep on this band, seriously. They have a new album coming out soon on Bridge 9 so watch out for that, because it's going to rule.

Earlier in the day I watched Cockpunch!. I like them, they're funny, but they were just mediocre. I mean we get it, you're fat and you hate everything.

I didn't head over to the main stage until Dragonforce played, because I like hardcore over pretty much everything. I had an interview with them earlier that left a really bad taste in my mouth, so I was hoping that their live show would make up for it. It did, sort of. They're extremely talented and sound just like they do on their recordings, but I was bored.

All That Remains (below) headlined and they're awesome live. This is just one of those classic bands that never disappoints. The drumming is great, vocals are spot on, and they know what they're doing. I'm a fan of females in big bands and Jeanne Sagan is no exception, she's an incredible musician. 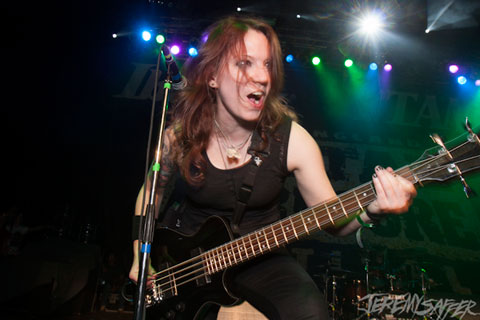 Honorable mentions for Saturday go to The Greenery, Shipwreck, The Mongoloids, and Naysayer.

Sunday was rough. I didn't get back to my hotel room until 8 am-ish because Lambgoat boss man told me to have fun, which I did in excess. The first band I caught that day was Glass Cloud (below), who includes the genius guitar player Joshua Travis. I have to say my expectations were pretty low for them, but this band was incredible. Their live show is ridiculous; hate on him all you want, but you can't fuck with Jerry Roush's vocals. 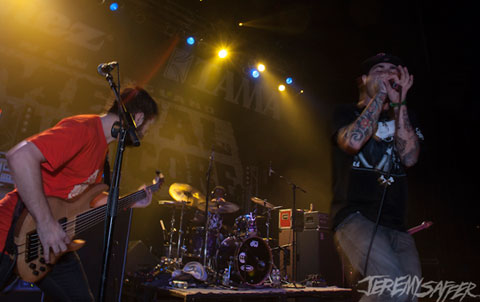 I headed back upstairs for Gideon, a Christian hardcore band from Alabama. Now I'm not usually into religious bands because I don't like being preached too, especially while watching heavy music. However, this band is so good that I watched their entire set and didn't want to stab myself in the ear with a screwdriver.

I watched maybe two songs of Volumes, whom I openly hate for more than just shitty music. I just don't understand why this band is so hyped. They're typical, boring, and obnoxious. You're not Meshuggah, so fuck off.

Anyway, watching the Recon comeback was so awesome. I'm into the addition of Rob Fusco (Most Precious Blood), he just seems to fit with the band really well. They just put out the Hell EP, it's so fucking angry and it really, really rules.

On Broken Wings followed Recon and I felt like I was in high school again, this was my first time ever seeing them. They played "I Do My Crosswords In Pen" and everyone went fucking crazy. Jon Blake knows how to command a room for sure, the energy that band brings is just insane. Then I disappeared.

I interviewed some bands, then I'm pretty sure I ended up drinking too much and eating too much Uno's. I watched Emmure (below) because they are my serious guilty pleasure. They are the most uncomfortable band to watch with the weirdest stage moves in existence. Frankie Palmeri is just something else, but that man is a beast of a vocalist. 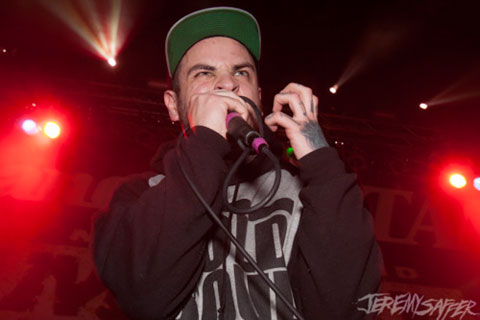 Then Vanna (below) came on and I really love that band. There's just something different about Vanna; maybe it's the flawless clean vocals or the catchy songs, but I love them. They were jumping in the crowd and Davey [Muise] jumped off a speaker. They're just really high energy, which is awesome. This whole band is also super babely - just going to throw that out there. 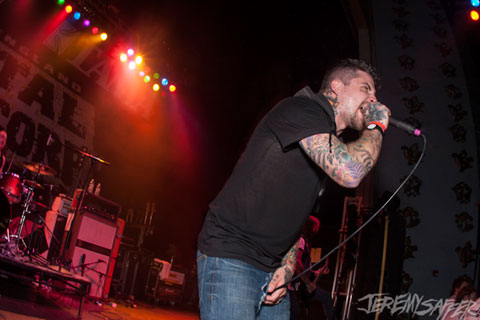 All I wanted to do on Sunday was watch Killswitch Engage (below). I had the killer opportunity to sit down with Jesse Leach earlier in the day and do an interview which made me even more psyched to see them. If you weren't there you need to YouTube that shit, seriously. If you were there, you're a lucky bastard and should relish that moment for years. I'm sad to see Howard [Jones] leave, but I'm incredibly happy to see Jesse back. Expect a new album soon and expect an ear orgasm. 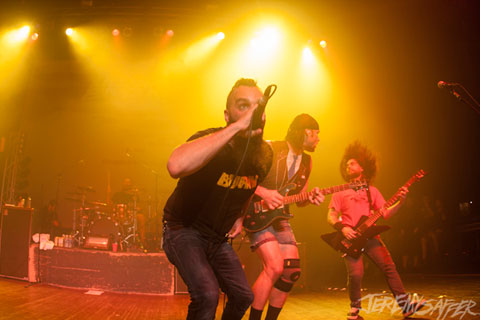 All in all, New England Metal and Hardcore Fest blew my mind. I'm from Los Angeles, so we do things a little differently than those damn East Coasters, but they almost do it better. What I noticed most was the unity. Everyone there was so different, but everyone seemed to get along and be friendly. If you have never attended NEMHF, you need to. I don't care if you have to sell your girlfriend's soul to get there next year. If you love heavy music you must attend before you're too old to stage dive.

"I saw this band. I like them and they were awesome." What a worthless write up.

I was there for day one. Fun as always and i'm usually all 3 days or how many they have. One good thing about living in new england.

"What's great about this band is that they just get it" What a superficial review. No in-depth responses to the musicianship of the bands' members or how the festival was set-up and how that affected the bands' performances. Not sure how you got the position as a writer, but judging by the class of writing Lambgoat's pushing it can't be that hard to get a job here. Maybe try editing your articles to have at least SOME substance cause right now it reads like "THAT'S GOOD. THAT'S BAD. DURHUR"

lets keep in mind that shay gets f*cked on burning angel and has a kid. she's stupid.

The festival was awesome. This article, however, was not.

wait, did you actually PAY for someone to write this crap?

The diction and syntax is god awful. f*ck me for noticing this. Also, by reading this am I supposed to kick myself for not going and missing out?

skimmed this post while extremely drunk, you are a gay

This is so f*cking bad. Lambgoat must be an equal opportunity company.

Some of the most badly written and unprofessional 'journalism' I've ever had the misfortune of reading.

Holy shit, that was terrible. Webby, if you're paying, send me next year. I live in that "shitty town" (i.e. the second largest CITY in New England).

This writer is f*cking awful.

Your a dumbass T.A.S. destroys on every band you just mentioned. Your just a pssy and not man enough to handle it.

f*ck you Jeremy Saffer your a low life and your writing skills are f*cking terrible.

Just came back to say that Shay is a f*cking whore and I can't believe she was ever permitted to write for a website, even one as shitty as Lambgoat. I'm grateful though, if she can find work as a 'journalist', then surely anyone can; I may give it a go myself, since I surpassed her writing 'skills' by the time I was 13