Ryan Neff (Miss May I): Six Songs To Die With

Miss May I bassist and clean vocalist Ryan Neff selects Six Songs To Die With. 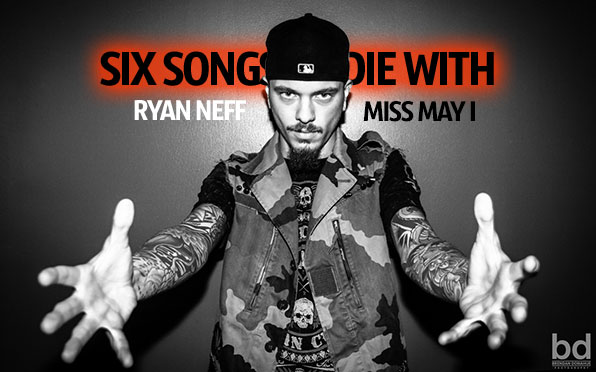 Since releasing their debut full-length in 2009, Troy, Ohio band Miss May I has gone from a relative unknown to the top of the modern metalcore heap. With a stable lineup and a reliable record label, Miss May I are poised to further improve upon their recent chart success with the release of a new album in early-2014. In the interim, we wanted to check in with bass player and clean vocalist (and all-around nice guy) Ryan Neff and find out what songs have helped to shape his existence.


Ryan Neff: I guess if I were stuck I would want six songs that can apply to the range of emotions I may feel by being sun-blistered, coconut filled, and social media free.


Ryan Neff: First I would want a happy track, something that reminds me of childhood, or high school in this case. It would have to be a grunge tune since that was one of my big obsessions, so Nirvana's "Breed" is a good one. That was the first song I ever learned on bass.


Ryan Neff: A song for feeling hopeless, dark, and sad as I'm sure I would, so I have to go with "Down In A Hole" by Alice in Chains. Anything from this album could pull that off. Dirt is one of my all time favorite albums.

Queens of the Stone Age

"A Song For The Deaf"


Ryan Neff: Next is "A Song for the Deaf" by Queens of the Stone Age. Besides the fact that I love the band, album, and tune, the opening bass lick has stuck with me since I first heard the song, and always makes me stoked.


Ryan Neff: A tune from Astro Creep 2000 by White Zombie is sure to slip in there, most likely "I, Zombie" and it would be closely followed by Pantera's "Primal Concrete Sledge". I remember both of these bands as a young kid scaring the shit out of me, and now I can't get enough.


Ryan Neff: I'm going to round it out with something from the Nine Inch Nails catalogue. I am going to go with "Dead Souls." This song reminds me of riding around in cars in high school with friends. Something about it just gives me that warm and fuzzy feeling that your favorite tunes give you.

I am pissed that I like all of these songs with the exception of White Zombie. Damnit.

I bet he doesnt know dead souls is a cover

I dont listen to miss may I, but i do listen to all the bands listed. Great list and i would second it!

People in metal bands who don't like metal = elitist jerks. Excuse me sir, you know if you played in a band more akin to those bands you'd make WAY more money? Quit trying to seem cool. Those songs are old and boring.

The lyrics on Dirt are so bad

why the f*ck should we care about some nobody metalcore crease's music taste?

Dead souls is a joy division song. Seriously, why was this f*cking dork asked to do this.

Wow this is the worst list I've ever seen on here. What a gay.