Based in Massachusetts, Cave In began in 1995 as a quintet, attempting to create heavy music, while incorporating other various musical elements. After recording a demo on a small four-track, the band was offered to do a split 7" with Gambit. Th read more

Based in Massachusetts, Cave In began in 1995 as a quintet, attempting to create heavy music, while incorporating other various musical elements. After recording a demo on a small four-track, the band was offered to do a split 7" with Gambit. The band graciously accepted, and traveled to Salad Days Studios, where knob-turner Brian McTernan recorded four of the band's songs in late-1995. In early-1996, the band would record more tracks with McTernan. The songs would eventually show up on two split seven-inches in 1996 (one with Early Grace on Independence Records, the other with Piebald for Moo Cow Records). It wasn't until late-1996, that Aaron Turner (Hydra Head Records, ISIS) saw Cave In live, and expressed interest in putting out the band's next release. In the winter of 1996-1997, the band would enter Salad Days again, to record its debut single for Hydra Head, which was released in May 1997. At this point, the band would experience some line-up changes in the bass and vocal positions, but would then focus on writing new material. The band finally solidified its current four-piece incarnation, and hit the studio to record its debut full-length, "Until Your Heart Stops" (Hydra Head). Following the release, Cave In began to delve into new ideas and sounds for the band. The 7"/CDEP, "Creative Eclipses" (Hydra Head), would indicate a new direction for Cave In. "Jupiter," the band's latest full-length, is a far cray from earlier Cave In, and more towards a progressive sound which the band has always wanted to achieve. In 2001, the band would receive its biggest break yet, signing to a major label (RCA Records), while releasing a CD single on Hydra Head. Cave In has also participated in compilations and tribute albums (the Cure, Bad Brains), gotten into a van accident, had equipment stolen, and toured with high-profile acts, such as ISIS, Neurosis, Converge, and the Dillinger Escape Plan. Fans of metalcore should check out the band's earlier releases, which have been compiled onto one CD, "Beyond Hypothermia," and the more-progressive, "Until Your Heart Stops." Listeners of indie-rock, Pink Floyd, Led Zeppelin, and Radiohead will want to check out the band's more-recent efforts. read less

Cave In - Until Your Heart Stops

Cave In - Beyond Hypothermia 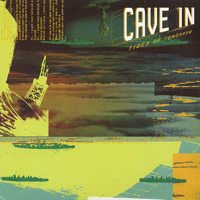 Cave In - Tides Of Tomorrow