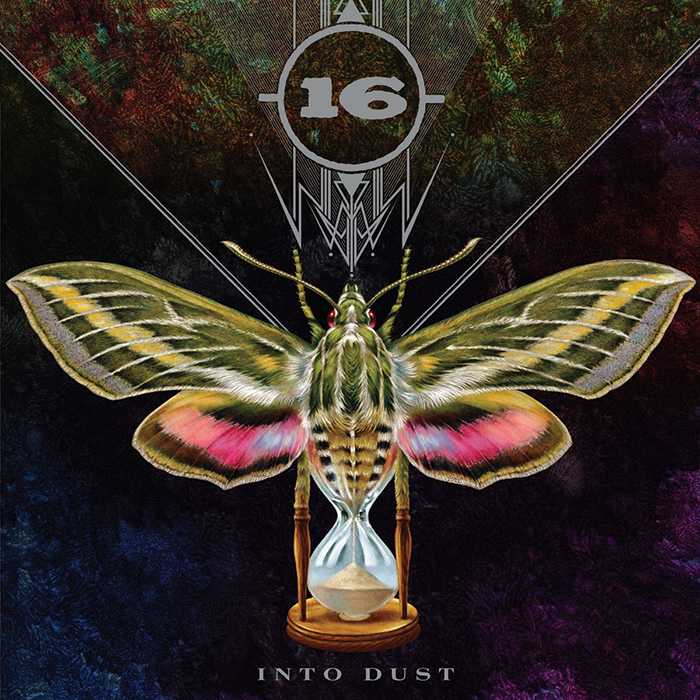 Over the past three decades, Southern California sludge veterans –(16)- have rather discreetly amassed a wealth of material. While they have released a bevy of LPs, EPs and even splits with notable groups like Grief and Fistula, they have somehow evaded the notoriety and contemporary name-dropping that some of their peers have gained as time marches on. But so too does the band, having evolved over the past 30 years from their nihilistic noise-rock laden beginnings to a more groove-centric, albeit still grating sound. 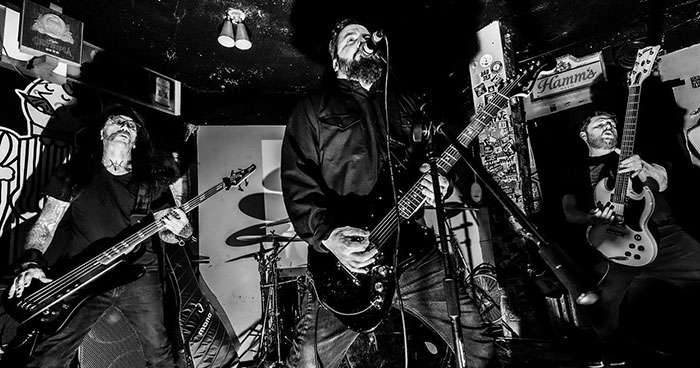 Into Dust is the group’s ninth full-length album and their fifth with venerable extreme music outlet Relapse Records. Led by founding guitarist Bobby Ferry, who assumed lead vocals after Cris Jeru’s 2020 departure, -(16)- tear through 45 minutes of music that is both punishingly heavy and, at times, extremely catchy and memorable.

What –(16)- have really locked into over the past few records is an accessible sound that finds a middle ground between spacey stoner rock and grimy hardcore. It’s something that was perhaps best expressed on their 2016 album, Lifespan of a Moth, which could easily draw as much comparison to Scissorfight as it could Fudge Tunnel. On Into Dust, the high-points are again when the band dials into this approach.

For much of the record, it’s full steam ahead with Ferry and company rolling along bass-heavy rhythms and punchy riffs. Songs like “Misfortune Teller” and “Ash In The Hourglass” are deceptively hooky with earworm guitar licks and driving mid-tempo beats. Elsewhere, there band takes some chances that pay off; closing number “Born on a Barstool” is a crunchy ode to boozing that ends with a slick saxophone solo, while “Lane Splitter” picks up the BPM’s to explore the punkier side of things.

Throughout Into Dust, Ferry intersperses a sung vocal to break up his gravelly screaming. “Scrape The Rocks” is a more melodic track, relying on big, ringing chords instead of chugging grooves, and one where Ferry belts his cleaner tone. “Null and Void” even features a strong chorus section to accompany its bouncy (dare I say ‘nu’?) guitar lines. His thin, warm vocals juxtaposing against the dense instrumentation calls to mind something more from the alternative rock world like Hum or Failure.

But there’s also a side to Into Dust that feels like -(16)- seem to be experiencing an identity crisis. As pioneers of what we now refer to as sludge, it seems odd that they often times sound more like another band than themselves. One can’t help but to hear Down in the descending guitar slides of “Dead Eyes” or Crowbar in the somber harmonies and bendy licks of “Scrape The Rocks” and “Never Paid Back.” There are even momentary glimpses of Mastodon’s grandiosity sprinkled throughout.
advertisement

If one can escape the moments of ‘that sounds like this’ or ‘that sounds like that,’ Into Dust has plenty to offer, though you can’t help but wonder if -(16)- may be at a turning point in their long career. There is certainly nothing wrong with experimenting with new ideas, but some of Into Dust seems like a backslide for a band who has trudged their way through the murky waters of sludge metal since its beginnings.

Bottomline: Into Dust is certainly a serviceable and listenable album; hell, it may even be a great entry point for someone looking to discover the world of sludge. But in the grand scheme of not only the genre at whole, but even in the band’s own back catalogue, it falls just a bit short.

Written like a 15 year old try way too hard to be cool and name drop bands that don't get that much attention and act like you are an expert at listening to music like that's a thing lol. You fail at life

Damn these comments are brutal lol. I've been enjoying this album quite a bit though. A welcome surprise in my opinion.

The best thing about -(16)- is the stellar songwriting. The dudes continue to put it together. A lot of bands just string riff's together but this get's better after repeated listens. Excited to hear more and dig into their back catalog.

f*ck off Colin. You suck at writing and no one likes you:

I'll take music "reviewers" that don't know anything about sludge metal for 200, Alex.