Come To Grief When The World Dies 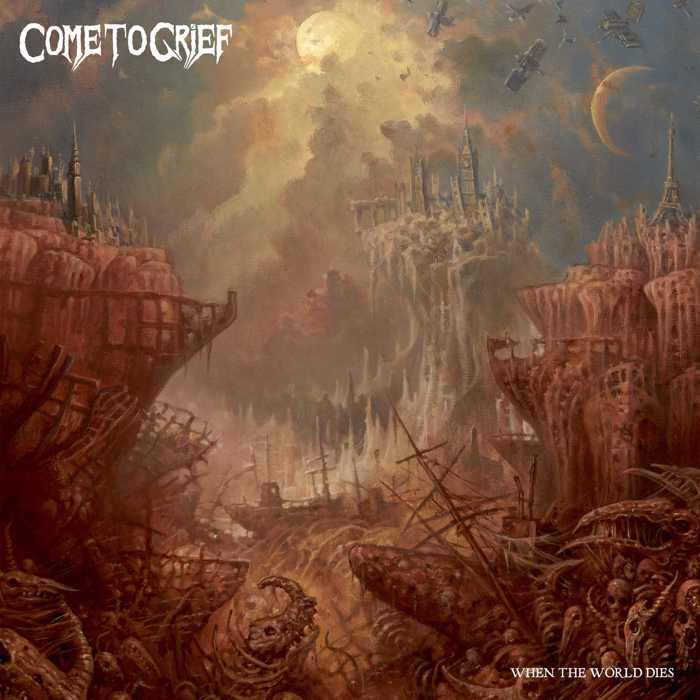 Sludge is a term that has been misused in recent years. Journalists, critics, fans and general shit-talkers alike have often misapplied "sludgy"—or other variations thereof—to any gritty, murky, down-tuned guitar tone, with complete disregard for the content of the music. Generic hardcore and metalcore type bands have also latched onto the label while failing to grasp the nature of its meaning. Luckily, genre pioneers like Eyehategod and Crowbar seem to resurface every few years to remind us of the truly unhinged, depraved and downright dismal nature of the style.

Another key player in the development of the sound—though perhaps not given their proper due—were Boston based sonic-oppressors Grief. The New Englanders brought their own take on the fusion of hardcore and doom metal, releasing a handful of pivotal albums throughout the nineties, and with song titles like "I Hate The Human Race," "Isolation" and "Fed Up," the band carried with them a certain sense of desolate misanthropy as well.

Grief split in the early 2000s, but in 2016 original guitarist Terry Savastano put together a new version of the band using their celebrated classic 1994 album Come To Grief as their namesake. Along with drummer Chuck Conlon, who played in the final iteration of Grief's original run, guitarist/vocalist Jonathan Hebert and a rotating cast of bass players, the four-piece have since toured consistently alongside the likes of Eyehategod and The Obsessed, and have released a number of EPs and singles of new material to positive response.

So it was with great anticipation seekers of the bleak awaited the band's first full-length offering, and When The World Dies does not disappoint. At a runtime of 71 minutes, the record offers seven tracks of mid-paced, murky sludge dispirited and misanthropic enough for those concerned age may have softened the intensity.

Come To Grief's sound is rooted in slowed down Sabbath riffs, bluesy stoner licks and late era Black Flag grooves. The combination creates a churning, ragged base from which they build upon. Throughout most of the record the band jumps between minimalist chord structures and repeated lead riffs, lurching at a mid-pace, dropping a solo in here and there. "Scum Like You" is carried along on a descending guitar line while "Devastation Of Souls" moves into more stoner rock territories. On the album's title track, bassist Randy Larsen squeezes a Geezer Butler-esque lead-bass lick in between the guitars.

Hebert's lead vocals are a howling screech of trepidation. His voice lurches in short bursts matching the slow-burn of the ringing chords. Throughout, Savastano provides accompaniment with a lower scream building out the depth and on "Life's Curse" and "Bludgeon The Soul." Jacob Bannon of Converge notoriety even lends his inimitable shriek for an extra layer and dimension of sound.

The majority of When The World Dies trudges along at a similar beats-per-minute count, but the band presses the brakes just enough on the final tracks to draw the closest comparisons to Grief. The slow, doomy "Bludgeon The Soul/Returning To The Void" and "Death Can't Come Soon Enough" approach the same deranged sense of terror Savastano and company created in the nineties - the perfect one-two knockout punches to close out this soundtrack for the morbidly despondent.

Of particular note would be Kurt Ballou's excellent production work. The record sounds filthy, but the integrity of every instrument is well maintained. In fact, When The World Dies sounds simultaneously clean and raw, creating the perfect bed for Come To Grief to lay their brand of sludge upon.

Bottom Line: When The World Dies is a fantastic debut from a band of veterans. If you've seen Come To Grief live over the past few years that should come as no surprise. This is a record for fans of bands like Eyehategod, Grief and even Khanate to wallow in their misery to, and love every minute of it.

lol at this review. It's like when you had to write an essay in high school with a certain amount of words so you just make up bullshit that you think makes you sound smart.

Spending all that time bullshitting about how this is heavy, sludgey, miserable tr00 xSludgex shit but then saying these nobody d-listers are playing f*cking BLACK SABBATH and BLACK FLAG riffs. That's the most retarded way to shoot yourself in the foot and out yourself as a beardo tourist using sludge as an accessory. The only thing miserable here is this garbage and Crowbar's last offering

I don't even know who Belmont is but I already don't like him.

This album is f*cking awful and sounds like they crawled into a hole with Converge and the end product somehow turned out entirely worse. f*ck Terry, he needs to end this shit and quit ruining the reputation of Grief.