Kayo Dot Moss Grew on the Swords and Plowshares Alike 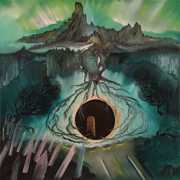 For the past twenty years multi-instrumentalist Toby Driver has impressed and befuddled metal audiences daring enough to venture to the outermost fringes of extreme music. Drawing as much from chamber music as death metal and goth rock, Driver has compiled a vast catalog of music ranging from the noisy improvisations of Bloodmist to the serene minimalism of Tartar Lamb, but always returns to his heavy roots. Of course, to label his work with Kayo Dot - Driver's main vehicle of musical exploration - or its predecessor Maudlin of the Well, as metal bands would be a disservice to the eclectic nature of their output. On albums like 2008's Blue Lambency Downward or 2010's Coyote, the group delved into more experimental jazz-like tendencies, while the synth-driven Coffins On Io, released in 2014, sounded closer to something like the Blade Runner soundtrack.

On Kayo Dot's tenth full-length, Moss Grew on the Swords and Plowshares Alike, Driver, who plays nearly all the instrumentation on the album, pulls from a bit of it all. Layers of synths create a dense bed of sci-fi sounds; an atmospheric backdrop for the musician to build upon. Swaths of heavy guitars streak through the songs as he alternates between sung and screamed vocals, sounding about as close to a metal band as they ever have. Greg Massi, former Maudlin of the Well member, even accompanies Driver on three songs ("Void In Virgo," "Get Out of the Tower," and "Epipsychidion"), providing guitar solos that help push the songs into prog-rock territory. And that's one of the most immediately noticeable characteristics of the album; Moss is Kayo Dot's most guitar-forward record in years.

Although often times louder and more extreme, the album sounds almost like a companion to Kayo Dot's previous release, 2019's Blasphemy. Continuing with that record's cinematic feel, Moss pushes further into an anxiety-ridden epic, as if an accompaniment to some unmade film. Longtime collaborator Jason Byron once again provides lyrics that are mysterious and intriguing, weaving a poetic web of language that demands closer examination. Kayo Dot has often made concept albums, and while Moss's subject matter may not be easily apparent, it appears as if an underlying theme runs beneath it all.

The album's lengthy songs – only one clocks in at less than seven minutes – weave through unconventional and unpredictable song structures. A blasting black metal section may dissolve into a spacey wash of keyboards or a pulsing, effect-laden guitar may overtake a winding synth lead at any moment. "Void In Virgo" even contains some of the catchiest melodies Driver has ever written. Kay Dot's music has often been described as avant-garde and has always required multiple listens and Moss is no exception, there are new ideas to notice every time.

Bottom line: In many ways, Moss Grew on the Swords and Plowshares Alike is perhaps the album Kayo Dot fans have been waiting for. After years of experimentation with electronic and synth-driven music, Driver has made a heavy, guitar-oriented album once again. Moss may not be the most approachable album, but for the daring, its rewards are great.

Where's the Asian chic complaining about getting male attention?

I got through 2 songs and couldn't take the lame-ass synth metal sound. Hard pass.

this is very good platform

go tour with greg anderson and put the whole world to sleep.