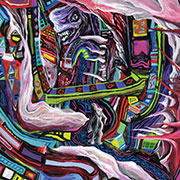 1. A Killing Joke 2. The Spectacle 3. Wired Depths 4. Undesirables 5. Tethered 6. Clock Cleaner 7. Catastrophic 8. The Weight 9. Before The Foal
2021 Relapse Records
Our score 8
by Colin
6/15/2021
It certainly doesn’t feel like it has been seven years since the Nashville based trio Yautja released their debut full-length, and much to their credit, it doesn’t sound that way either. Songs Of Descent, with its patchwork of styles and influences sounds as fresh today as it did when it came out. Perhaps it's the complex nature of the material, a chaotic fusion of sludge and grind played with technical precision, that helps it maintain a high degree of replay value, or maybe the band just writes damn good songs. And if that is the case, then their follow-up album, The Lurch, is sure to produce a similar result. On The Lurch, Yautja reexamine their song structures - what would have previously been two or three separate tracks is now rearranged and woven more intricately. Rather than breaking up the mix of styles, the band has brought them all together, creating a more dynamic composition. It’s evident right from the opening track, “A Killing Joke,” where Yautja throw a little bit of everything from mid-paced death-metal riffing and dive-bombing pinched harmonics to fiery blast beats and sludgy, bass-heavy grooves, all anchored by the outstanding percussion work of Tyler Coburn. The drummer’s ability to switch time signatures and patterns, accenting it all with creative drum fills, is one of the band's strengths. In the beginning of "Catostrophic," Coburn’s frenetic drums accompany an off-tempo riff, but when guitarist Shibby Poole and bassist Kayhan Vaziri return mid-song, the drummer blasts his way through at a blazing speed, a shift that adds extra heft and dimension to the guitars. Tracks like “Undesirables” and “Clock Cleaner” stick to a grimier, lumbering sound, focusing on the group's ability to pummel through sheer force just as well as speed. The band excels in both areas, and would probably make a fine record focusing on either style, but it’s their blending of the two that makes The Lurch so strong.
advertisement
Elswhere, Yautja blend other concepts into the mix. “The Spectacle” dabbles in some post-metal with a noisy mid-section break while “The Weight” plods along a buzzsaw of a palm-muted riff until it breaks loose into a smattering of pick scrapes and double kick drum. Closer “Before The Foal” is perhaps the band's crowning achievement, a seven-minute epic that continuously builds up to a crunching cacophony of noise. As the music begins to fade out, it’s the first time in the album's forty-six minute runtime that there's a break from the crushing mayhem. Bottom Line: The Lurch is a fitting name for Yautja’s sophomore release. The album moves frantically between rhythms and styles, abruptly stopping, shifting and restarting at every turn. The trio have taken the last seven years to expand their songwriting into a more potent delivery, combining their sludgier tendencies with blasting grindcore in a more concise manner. The Lurch is an album that will require many listens to grasp, but it won’t grow old any time soon.

I'm listening to this CD again just as I found out that libertarian idiots have forced me back into the mask because they wouldn't vaccinate. This is a perfect recording to outsource anger.

I mean if your vaccinated why you bitching? You're protected right? So the one who bears the risk is the unvaccinated. If you hate them so much; wouldn't it stand to reason that they would be the ones to die? You sound like a f*cking idiot.