Septa Bitten By The Serpent Of The Kingdom Of The Spirit 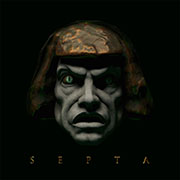 1. Emet: Truth 2. Clay Boy 3. Pogroms 4. New Motive Power 5. Tannhäuser Gate 6. Golem / 1915 7. The Tin Man 8. Met: Dead 9. You Were Created by the Sages; Return to Your Dust
2019 Venona Records
Our score 7
by Alex
1/3/2020
Where I come from, Septa is the Southeastern Pennsylvania Transportation Authority. Elsewhere, however, Septa are a Ukrainian alternative metal/rock band with several records under their belt. Four years ago we (Lambgoat, not I) reviewed the group's Destroyer album and the writer admitted, "I have no idea if Septa are incredibly original or completely derivative"; that sentiment is also easily applicable to their latest album, Bitten By The Serpent Of The Kingdom Of The Spirit. Intermittently channeling bands like Tool, Mastodon, System Of A Down, Finch, and Norma Jean, Septa have shed some of their erstwhile aggression and birthed a deftly produced album of unorthodox progressive alt-metal post-rock that thematically purports to interpolate themes from "the novel Der Golem by Gustav Meyrink and the lost German movie The Monster of Fate." (If the previous sentence hasn't frightened you away, I applaud you.) Bitten By The Serpent Of The Kingdom Of The Spirit opens with perhaps its most ambitious track, "Emet: Truth," a minor rock opus that features skillfully multi-layered vocals and driving heavy guitar grooves. It's memorable without a hint of desperation. With roughly 90 seconds remaining, the song is stripped of its muscular guitars and its urgency, yielding a compelling, albeit mellow outro. The next three songs are likely the album's least effective. "Clay Boy" isn't a blatant misstep, just a forgettable foray into hard rock faintly (and strangely) reminiscent of Incubus circa 1997. "Pogroms" is equally passable and similarly bland, with modern nu-metal accoutrements that do little to advance the effort. "New Motive Power" features more pulsing hard rock, though its vocals are delivered with enough vitality to make the song largely worthwhile. Septa restore the promise of the album's opening cut via "Tannhauser Gate." Its lumbering, slightly hypnotic opening expands into a memorable mid-tempo affair, with adroit vocal harmonies leading the way. Septa are particularly masterful at two things: elevating pedestrian vocals via judicious harmonization; and ending songs before they wear out their welcome. Both techniques are on full display here. "Golem / 1915" is another laudable offering. Striking a nice balance of heaviness and catchiness (there are even melodic vocals over blast beats), this is anthemic hard rock with Eastern European flair. As foreshadowed by its title, the song is actually comprised of two dissimilar compositions seemingly fused together for lyrical purposes. The latter portion is subdued but sufficiently captivating (I'm pleasantly reminded of the final Codeseven record). Though they typically indulge in rock, Septa can still wield a brutal battle-axe. The beginning of "The Tin Man" channels more malevolence than your average Behemoth cut before exploding into a metalcore rager. I could listen to a whole album of this. Clean vocals resurface to close out the track, subtly reminding their audience that Septa aren't actually a metalcore band. "Met: Dead" is a short, half-baked ballad featuring acoustic guitars, wistful vocals, and plaintive harmonica. Respectable, but not particularly moving. The LP concludes with its longest song, "You Were Created by the Sages; Return to Your Dust," a sprawling prog rock piece that peaks around the one-minute mark on the back of a rousing quasi-chorus. The remainder paddles amid ripples of Opeth and Tool stylings but never truly rises above competent. Listen to a single song on Bitten By The Serpent Of The Kingdom Of The Spirit and you might tag Septa as an experimental prog rock band. Choose a second and you're in post-hardcore heaven. Sample yet another and you've strayed dangerously close to nu-metal territory. Listeners who rely upon the safe harbors of sonic homogeneity would be well-advised to avoid this LP (stick with your Hatebreed records, guy). Yet one man's multiple personality disorder is another's eclecticism, and if it's variety you seek, this album will probably scratch every itch tormenting your musical body. Bottom Line: Frequently impressive, though sporadically unremarkable, Bitten By The Serpent Of The Kingdom Of The Spirit was clearly crafted with meticulousness, and while its inconsistency precludes greatness, this diverse and unconventional album is indeed a worthwhile listen.

Neat review. But ngl, I clicked because thank you for acknowledging what SEPTA means to us philadelphians lol.

Rode their buses in the past. Subway too. Had a great time.