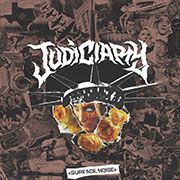 1. Social Crusade 2. Karma's Knife 3. Temple 4. Stronger Than Thou 5. Burden of Truth 6. Pure Fury 7. 7.65mm 8. Zero Hour 9. War (Time is Nigh)
2019 Closed Casket Activities
Our score 8
by Colin
3/1/2019
Surface Noise starts at full blast. Judiciary's first full-length record is twenty-seven minutes of the type of metalcore that existed before that label became a dirty word; back when bands like Integrity and All Out War were beginning to cram metallic riffs into their ultra heavy brands of hardcore. The five-piece slams through eight songs ("Zero Hour" is an interlude) of stomping riffs and brutal grooves, an energetic blend of fury and force. Less thrashy than their Texas brethren Power Trip, Judiciary have loaded Surface Noise with enough screaming harmonics and dive bombs to satisfy the crossover fans while staying more on the metallic hardcore end of the spectrum. Opener "Social Crusade" wastes no time setting the tone for the album, Slayer riffs accompany crunchy grooves as the song builds up to a ripping solo. Vocalist Jake Collinson screams his way through, providing a higher pitched rebuttal to the production's meaty bottom end. Tracks like "Burden Of Truth" and "Karma's Knife" follow suit: raw, savage and heavy as hell. As the album progresses, though, Judiciary mix up the tone with a few guest vocal spots. Brody King of God's Hate adds a lower inflection to the chug heavy "Temple" while Mortality Rate's Jess Nix accompanies the group during the breakdown of "Pure Fury," one of the album's heaviest moments. The band's slower, more stomping side is displayed on "7.65mm" and closer "War (Time Is Nigh)." They hit like a wrecking ball, steadily soaring, yet pummeling everything in their path. That's what is so great about Judiciary. It's heavy without being overbearing; it's angry without being off-putting. They are not breaking any new ground on Surface Noise, they're just doing it all exceptionally well. I like my hardcore with a side of metal, and Judiciary are serving it up just right. Bottom Line: Whether you want to call it metalcore, crossover or even metallic hardcore, it doesn't really matter. Surface Noise is just plain good. Judiciary are a talented band who are playing the style right.

First album lambgoat has reviewed in quite a while that I actually enjoy. Cool.

yeah this is good.

This video has been a good resource of information for me in my research. https://www.confidentialde tective.com

This video has been a good resource of information for me in my research. https://www.confidentialde tective.com