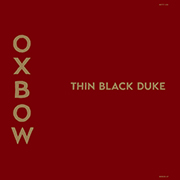 1. Cold and Well-Lit Place 2. Ecce Homo 3. A Gentleman's Gentleman 4. Letter of Note 5. Host 6. The Upper 7. Other People 8. The Finished Line
2017 Hydra Head Records
Our score 8
by Colin
7/3/2017
Ten years ago, Oxbow unleashed their beautifully dark concept album, The Narcotic Story. The result was seemingly a culmination of decades of work – the record that they had been moving towards since the beginning. The band had refined their avant-garde noise rock experiments into tightly wound structures, each song a movement in the succession of a greater whole. The Narcotic Story also found Oxbow wholly embracing sonic textures previously just hinted at – piano and string arrangements complemented the group's raucous twisted grooves, an ebb and flow of delicate control and explosions of rock fury. On Thin Black Duke, songwriter and guitarist Niko Wenner explores the power of restraint even further. While Oxbow's early material seemed combustible at every turn, constantly on the brink of descending into utter discord, the songs on Thin Black Duke see the band entirely in command. Wenner's genre-bending compositions and vocalist Eugene Robinson's unmistakable wails are more in unison than ever before. It's distinctly Oxbow while simultaneously something entirely new. The dynamic is noticeable from the opening seconds of "Cold and Well-Lit Place," which kicks off with the song's main theme being whistled before soaring into its opening verse on an arrangement of strings and horns. As the group moves through the song, Robinson's vocals are front and center, only now he's worked his screams and moans into more of a dreary croon. The theme rises and falls between guitar and horns, carving out a hook that makes "Cold & Well-Lit Place" by far the catchiest song Oxbow have ever written. "Ecce Homo" and "The Upper" bounce along over a foundation of piano, slowly building in volume and depth while "Other People" utilizes a horn section to juxtapose the noisy feedback. The restraint Oxbow shows makes the moments where they veer into chaos that much stronger. Particularly on display in "Letter Of Note," the track devolves into a cacophony of blaring horns, high-pitched wails and driving guitar before circling back to its main riff. The core of Oxbow's unwieldy frenetic nature comes during "A Gentleman's Gentleman," the most urgent and moving song of the batch. As the group shifts through up-beat, distorted riffs, Robinson mumbles nearly incoherently before settling into a partially growled, partially spoken description of the record's title character. "The Duke's mustache is like cordite," Robinson expounds, "and his head is clean shaven / and his neck is fucking bull-like." But it is perhaps closer "The Finished Line" that best represents Oxbow on Thin Black Duke. Robinson teeters on the edge with his tantrum-like cries as the band anchors the madness, throwing in everything they have. Horns, strings and piano swirl around the trio of musicians as they shove the record to its intense conclusion. Bottom Line: Oxbow have been one of the most intriguing, original and uncompromising bands since their inception. They have existed on the fringes of the metal world, where they are likely to remain for those in search of the strange and the experimental. Thin Black Duke might sound like a shift on the surface, but it is unmistakably Oxbow in every way. It's dark, it's haunting, and it's wonderful.

this looks like the default photo for when the onion writes a band article. dark ominous band slays at 8 year olds birthday bbq.

not a reviewer. a commenter. and not a huge fight. a small one, haha....

What's so great about this? Nothing.