John Frum A Stirring In The Noos 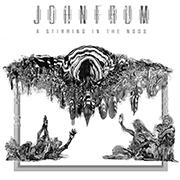 1. Presage of Emptiness 2. Pining Light 3. Memory Palace 4. Through Sand and Spirit 5. Lacustrine Divination 6. He Come 7. Assumption of Form 8. Wasting Subtle Body
2017 Relapse Records
Our score 8
by Scott Ustel
6/4/2017
I have a penchant for landing extremely brutal bands on the review roster, and John Frum is no exception. Generally speaking, this isn't an issue for me as I am a rabid fan of all genres of extreme music. Funny enough, this latest review, one of my first in about 5 years, is eerily similar in concept and theme to one of the last records I reviewed for Lambgoat before my hiatus. In the fall of 2012, I had the pleasure of reviewing the debut of another metal supergroup of sorts, the sludge mavens Serpentine Path. Although stylistically nothing alike, John Frum is also a convergence of four music industry veterans, known primarily for their involvement in three different bands. Once again, however, the sum seems to be greater than its parts. Featuring members of The Faceless, The Dillinger Escape Plan, John Zorn and a slew of other projects, the group claims to have been brewing since 11.11.11. Almost ritualistic and archaic in its presentation, A Stirring In The Noos has a very organic feel. Never once did I question whether something was sampled or manipulated beyond the players' capabilities. The crisp and well-defined recording fully allows you to take in each instrument at your discretion. This is exactly what I did, and after the first couple of play-throughs, I found that upon each subsequent pass-through of the album, I focused in on a different element. Even the ultra low death gurgles of Derek Rydquist are audible; you can actually make out the words clearly enough to know what he's so pissed about. It's truly a great recording that leaves nothing to be desired in terms of either sonics or production values. Immediately upon pressing play, "Presage of Emptiness" slowly fades in and we are greeted by the experimental guitar noodlings of Matt Hollenberg, metronome-like percussion of Eli Litwin, and the punchy basslines of Liam Wilson (a personal favorite bassist of mine; I will not lie). This soon gets wrapped up in the ferocious cacophony that is Rydquist's vocals, and the audio onslaught begins. Bashing through the first track takes about 5 minutes and then we are greeted by the equally crushing, yet less experimental sounding "Pining Light." This song really showcases what I would call the "Unique Leader" type sound that John Frum seems to adhere to, with tight galloping riffs underpinned by effortless blasts and kick work. Although they are highly experimental sounding on the album as a whole, a straight-forward death metal vibe is primarily showcased on this track. Although not as bizarre as the classic and untouchable Obscura by Canadian death metal masters Gorguts, this record is reminiscent of and may even pay homage to it. The use of strange chords and sounds instead of riffs per se became something Obscura is known for, and John Frum channel that approach quite well here. A Stirring In The Noos also takes routes that aren't ordinarily traveled by "death metal" bands. Witness third track "Memory Palace," a slow-burner and almost grindy track at times. The wailing and screeching guitars seem to flail wildly alongside the octopus-like drumming, creating a tension that transforms itself into a tight, calculated song. John Frum's near perfect marriage of psychedelia and brutality make for a nice change of pace in the death metal genre. With a running time of roughly 40 minutes, you will have plenty of time to ponder the concept behind the name and imagery of the band. Full of myth, superstition and metaphysical experiences, John Frum's A Stirring In The Noos will leave you with more questions than answers regarding the group's namesake, and the incredible tale behind its origins. By the time I hit track "Lacustrine Divination," I am deep in thought, yet I'm suddenly sucked back into the music by the strangely stoned, yet soaring melodies that commence around the 2:30 mark. With each track I am reminded that Hollenberg's guitarwork is not something to be missed. His brutal riffs, melodic sensibility, and psychedelic freakouts keep things interesting the entire time as he manages to move between rhythm and lead guitar with impressive ease. The instrumental track, "He Come," truly showcases the prowess of each musician with its tight rhythms and sharp changes. This isn't to say that the vocals detract from anything, but on this track it's very easy to just sit back and imagine the band as a really loud and angry avant garde jazz band. Bottom Line: John Frum are probably one of the few death metal acts that I haven't seen, yet would actually go out of my way to watch perform live. The mixture of brutality and psychedelic melody isn't something that's lost on this listener, and it breathes some new life into a well-explored genre. Jazzy technical undertones are present, but not in The Dillinger Escape Plan or Cynic kind of way; more in a Gorguts and Deeds of Flesh kind of way (as crazy as that sounds). One of the more mind-blowing things about this superbly produced album is the effortlessness it exudes. The musicians never sound as if they are trying to keep up or doing something that they aren't completely at home with, particularly the superb drumming. With John Frum, Relapse Record have found themselves a formidable gladiator in the arena of death metal.

your opinion is incorrect

John Frum-A Stirring in the news

Knock,knock- Who's there? Gladiator- Gladiator who? Gladiator out before the Gang Bang!!!!