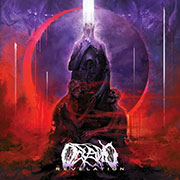 01. Dark Prophecy 02. Lucid Reality 03. Path to Extinction 04. The Great Tribulation 05. Illusions Unravel 06. Majestic 12 07. Final Form 08. The Event 09. Human Harvest 10. Revelation
2017 Sumerian Records
Our score 5
by Scott Ustel
5/24/2017
Well, if you're reading this I hope you like extremely down-tuned guitars and synthesizers because you will be getting a lot of both on Revelation. This latest slab from Chicago deathcore outfit Oceano was hard for me to follow, not because it's bad but because the songs just don't distinguish themselves. Individually, each track seems to blend not only into the others, but also into itself. Basically, the compositions just aren't distinct enough, something you notice after you hear "Dark Prophecy" back to back with "Lucid Reality." This issue plagues much of the record. The long-running and many-member-having urban deathcore act recently made the move from long-time label Earache to new home Sumerian Records. Known for its impressive and diverse roster of heavy music, Sumerian would seem to be a great label for Oceano to partner with, and you can tell from the production that Sumerian ain't cheap. However, with an ever-changing cast of musicians and now a new label home, one ponders how big of a hurdle this will all prove to be. All of the instrumentation and vocals are more than competent, but it's not about the musicianship. In the case of Revelation, there just doesn't seem to be much to grab onto, and I know that this kind of songwriting is true to the deathcore genre in general, but that's not necessarily a good thing. I find myself begging for a memorable or recognizable hook to present itself and when it finally does, it rears its ugly head as some single note passage played on extremely down-tuned guitars for 6 seconds. You never get to hear that really sick part again and even when you think you do, it's just because they use the same trick all over the album time and again. Oceano's guitar tone is also really strange to me, with some sort of scratchiness to it or something. It's clear and I know what's being played, but it just sounds irritating to my eardrums (I hate to be so picky, but it's true). The drumming is superb and they have a nice warm timbre to them, significantly helping to fill out the sonic palette. Meanwhile, the bass is particularly easy to overlook; it's there but does very little to stand out. It rumbles and rolls along side the percussion, adequately holding the rhythm down, but nothing else. The rotating cast of members in this outfit could be the real cause for the lack of feeling behind these tunes. This is a very heavy record, so it's strange to me that it can play in the background and be so monotonous. Fortunately, Adam Warren is a formidable vocalist with a great range and capacity to change tones on a dime, going from guttural to shrieking highs on occasions. He really is the best part of Oceano and Revelation. Frankly, these guys are all very talented, but even sections like the blasts mid-way through "Illusions Unravel" come off as limp and half-hearted. Bummer. Admittedly, I do enjoy the second half of the album a bit more than the first few tracks. "Majestic 12" ushers in some welcome new dynamics and more varied elements to the songwriting, a trend that thankfully continues from that point forward. The album's standout track is "Final Form," though it does commence with those same damn annoying synthesizers. Ironically, as much as I will openly praise Adam Warren's vocal abilities, this song is an instrumental and allows the rest of the band to showcase themselves. Bottom Line: There are quite a few new albums out there I would probably pick up before this one, but Revelation isn't a record I'd advise you to avoid completely. Warren and crew try to create a decent debut for their new label and I won't question their collective passion, but it's possible that too many lineup changes have diluted the band's potent formula. Not a terrible record by any means, but not one that I feel compelled to listen to again.

They're straight boring. Not sure how they remember how to play the songs, or maybe they don't and that's why nothing sticks out.

I only listen to the first 100 Demons record. None of that pssy shit.

Take this review down! literally the worst shit ever... over half of the record each song starts and sounds the same with the same bs breakdown... Garbage rehashed music... Adam warren needs to literally just give it up!