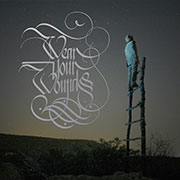 01. Wear Your Wounds 02. Giving Up 03. Iron Rose 04. Hard Road To Heaven 05. Best Cry of Your Life 06. Breaking Point 07. Shine 08. Fog 09. Heavy Blood 10. Goodbye Old Friend
2017 Deathwish Inc.
Our score 6
by Colin
3/20/2017
Given that you are browsing a metal and hardcore themed website, you most likely know who Jacob Bannon is. As founding member and vocalist of the highly influential hardcore band Converge, owner of the Deathwish, Inc. record label, and designer of countless album covers, band posters and t-shirts, his imprint can be seen in every capacity across the entire genre. Whether he is releasing records by seminal groups like 108 and Starkweather or collaborating with Dwid Hellion of Integrity, it's clear the respect Bannon's work has garnered within the music community. So it comes as no surprise that his latest project, Wear Your Wounds, boasts a lineup that features such names as Kurt Ballou of Converge, Sean Martin of Hatebreed, Mike McKenzie of The Red Chord and Chris Maggio, who has done time with the likes of Coliseum and Trap Them. Conceived by Bannon over the course of a number of years and re-imagined with this group of collaborators, their debut full-length veers away from the heavy pedigree of those involved. Instead, WYW strays toward the mellower side, closer to the atmospheric and minimalist approach of Bannon's experiments with Supermachiner and Irons, but with more focus on songs than ambiance. Utilizing characteristics of such groups as Explosions In The Sky and Codeine, each of the songs on WYW follow a general formula of building around a repeated piano line, increasing in volume and intensity as more instrumentation is added. The songs themselves aren't necessarily structured into any unique sections; rather they are long crescendos, never quite deviating from their original base. This is a formula that would be rather tiresome if not for the versatility of the musicians involved. Opener "Wear Your Wounds" is a heavy, post-metal crawl, bringing to mind the more melodic side of Neurosis while its follow-up, "Giving Up," plods along via a bouncing piano riff before a rush of percussion and effect-laden guitars swoop in, bringing the song to its noisy conclusion. Tracks like "Hard Road To Heaven" and "Shine" are more simplistic and mellower, the latter delving into an acoustic guitar and tambourine-driven finish. The ability of the band to jump between the quiet and the loud with such fluidity is certainly a strong point, perhaps best displayed in the noisy second half of "Iron Rose," with its chaotic drumming and wailing lead guitars complementing the quiet lull of its opening section. It's the moments in which the group hangs back that the album falters. "Fog" stumbles through a clunky introductory section before being saved by a rush of lead guitar and crashing cymbals. Likewise, closer "Goodbye Old Friend" meanders through an uninspired first half before its synth and acoustic guitar accompaniment take over. Fortunately, the creative nature and the flexibility of the musicians is able to make these songs work in the end. Bannon's clean sung vocals, however, leave much to be desired. Known primarily for his unique style of indecipherable screaming – fit for the noisy chaos of Converge – the vocalist strays outside of his comfort zone on Wear Your Wounds. Off key and lacking intriguing melodies or tonality, they tend to weigh the songs down. Bannon's voice is often times heavily distorted or buried deep in the mix, leaving a feeling that this material would have been better served as instrumentals. The vocals bog down the otherwise engaging post-rock build up of "Best Cry Of Your Life" and distract you from the beautiful, hushed arrangements of "Iron Rose." The fragility of the music just begs for something more. Vocal shortcomings aside, the album is an intriguing collection of songs. But that is exactly what it is: a collection of songs. Amid its unsteadiness, WYW is never able to find the cohesive flow of a proper album. Bottom Line: WYW is an admirable effort from Bannon and company that falls just short of its potential. There's plenty here to enjoy, but not without roughing it through the rest.

Who the f*ck writes these g*ddamn reviews??

Converge are noises metal they were never HARDCORE

I heard one track and it was horrible.

Converge are noise(s) metal they were never HARDCORE<-- then you have NEVER heard their 7 inch with "look back" or "gravel" on the aforewritten piece of wax... skinny jeans wearing fruit...

anonymous posted 2 days ago Who the f*ck writes these g*ddamn reviews?? COLIN, bitch.

A new review? So you review a record once every 6 months or so? Also your comment board is the worst. Constructive critism

i got the album and think its great. Not what i expected. But it didnt let me down. And converge is what i like to call metal-core. You know both. Either way dont like it f*ck off and troll else where

I like the record, I think the biggest thing against it was how long it took for it to finally be released. I hope the next one comes out faster, but overall it's a really solid record, v enjoyable. 8/10.