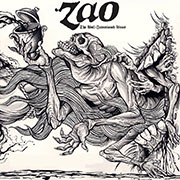 01. The Weeping Vessel 02. A Well-Intentioned Virus 03. Broken Pact Blues 04. Jinba Ittai 05. Apocalypse 06. Xenophobe 07. Haunting Pools 08. Observed/Observer 09. The Sun Orbits Around Flat Earth Witch Trials 10. I Leave You in Peace
2016 self-released
Our score 8
by Colin
12/13/2016
Say what you will about Zao, they've never made the same record twice. The band pushed the boundaries in the underground scene with their fusion of metal and hardcore in the late nineties, cementing their place among the forefathers of metalcore. But rather than rehash the formulas of such landmark albums as 1998's mosh heavy Where Blood And Fire Bring Rest or its noisy follow-up, Liberate Te Ex Infernus, Zao kept on pushing forward. Plagued by temporary breakups and lineup changes, the group treaded water through the early part of the 21st century, releasing a series of intriguing, if not uneven records. Though each release continued to explore new sonic territories, the band was able to maintain a distinct sound due mostly to the consistent contributions of long time members, vocalist Dan Weyandt and guitarist Scott Mellinger. With that duo leading the way, the band pushed on into the latter half of the decade, offering up two of their most unique sounding albums, The Fear Is What Keeps Us Here and Awake?. While each record drew from opposite ends of the spectrum - the former an exercise in raw intensity, the latter in controlled melodicism – they both failed to capture the essence of Zao's earlier work. That's where The Well-Intentioned Virus comes in. Make no mistake; this isn't a return to the group's classic material, however, the spirit is there. This may be due in part to the re-addition of guitarist Russ Cogdell to the fold. Absent since the band's fantastic 2004 release, The Funeral Of God, Cogdell had been a key player in Zao's strongest material. In this new five-piece incarnation, rounded out by drummer Jeff Gretz and bassist Martin Lunn, Zao may have actually found its most creative and dynamic lineup yet. All the signature elements are present - Weyendt's unmistakable demonic scream, downtuned heavy riffing and creative drum fills - but here they're wrapped in finely tuned song structures. Opener "The Weeping Vessel" utilizes its clean guitar intro later in the song to bridge its almost-melodic front half with a crunchy second half while "A Well-Intentioned Virus" grooves through frantic riffs. Mellinger and Cogdell shine as the guitars play off each other, subtly breaking from unison to harmony and back. Standout tracks like "Jinba Ittai" and "Xenophobe" flow seamlessly through rhythm changes and monstrous riffs, as loud and heavy as any from the group's back catalog. But that's not to say The Well-Intentioned Virus is one-dimensional; in fact, it is far from it. "Broken Pact Blues" and "Haunting Pools" recall the group's mellower, melodic stylings, albeit with a more refined approach. Touches of Mellinger's clean sung vocals are still sprinkled into the mix, this time however, more tastefully so, enhancing the flow of the album rather than disrupting it. The slow moving "Apocalypse" makes use of this ingredient as it crawls through its Neurosis-like drawl, building up to a turbulent mid-section. It nearly goes without saying but the always-on-his-game Dan Weyandt is in top form on here. Eighteen years after our first introduction to his unique and influential delivery, the vocalist hasn't lost his sound. In fact, in the years following, he has honed it, adding an ability to change the dynamic of the song with a higher or lower inflection. Weyandt even provides us with a brief moment of nostalgia in closer "I Leave You In Peace," when he drops the distorted scream for a spoken word section. It's reminiscent of the closing moments of Where Blood And Fire Bring Rest, reminding us that they are still the band that changed the game. Bottom Line: It would have been pretty easy for Zao to have called it quits by now, cash in on a couple reunion tours and play the classics. But with a history as storied as theirs, Zao have never done things the easy way. For that we should all be grateful. With The Well-Intentioned Virus, the group has taken their next step forward and proven that they are still ahead of the pack.

Funeral of God is the last album I loved of theirs. This one has been on repeat almost nonstop since Friday. Welcome back. -DM

I had fun with my own Dad.

I will never understand how this band can still be called zao with no original members. At what point do you, as a band, realize you have no idea how to play the first 3-4 records. Jokes.

The line-up has transformed over 20 years. No, there are no original member left, haven't been for years. But to act like they aren't still ZAO is crazy. You obviously have NO CLUE what you are talking about.

Um.. they actually did make the same album twice. With a different singer, but still. Remember All Else Failed?

lol. that IS true.

every Zao album has been good, including pre-Dan

it is crazy to think you can take the name of a band no one has been in since day one. its basically a zao cover band, assuming they even play songs none of them had a stake in. they are all mark wahlberg.

Well, Jesse (the "original" member) should have changed the name when everyone quit around him and he brought in dan and russ (who are still there now) and scott followed shortly after. In the grand scheme of things, this version of Zao has retained everyone but the drummer/bassist, which is fairly standard, from that point on.

yeah nobody TOOK the name.

iron maiden had original members when Dickinson left. we saw how that went. getting tied up with "original line up" stuff is nothing but some sort of nostalgia, and I am willing to bet most of the people that bitch the most about it even saw the original line up or heard the band until Blood and Fire or Liberate

You're argument is debunked by emmure. It's just Frankie and the glass cloud extravaganza.

They actually made the same record twice (All Else Failed). But everything else is spot on.

Great review. Long time fan of the band. I only heard two great tracks earlier in the year. Dan is one of my favorite vocalists.

Dan's vocals are sick, I always felt Scott Mellingers clean vocals were unnecessary, I think they are buried more in this mix though so he doesn't ruin as many good songs.

Zao is DAN WEYANDT, RUSS COGDELL, and JESSE SMITH, and it always will be. Dan was the voice, Russ was the sound, and Jesse was the spirit. It was with that lineup that they found their own craft and stood out in the world of music. I'm actually excited to check this record out.

except russ has barely written anything and some of their best material (Funeral, Fear and this) has been without jesse

Brett Detar was the genius that helped forge their new sound. 20 years ago. He left after one album but that album, WBaFBR is their best "new" album.