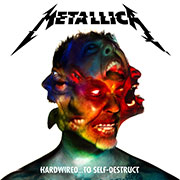 This review is pretty spot on....i said the same exact thing about "Spit Out The Bone"....that song kicks ass like an old Metallica song....Hetfield recaptured that attitude in his vocals there and the song itself is probably there best written song in the last 20 years. Ashame they couldnt do that for the rest of the album.

One thing I've noticed about this album in discussing it with my friends and on the internet, is that no one really agrees on which songs are the "filler." Everyone seems to agree that Hardwired, Moth into Flame, and Spit out the Bone are awesome. Though once you start discussing Halo on Fire and the majority of the second disc you'll tend to get wildly different answers about which is good and bad. So in that sense I think they did the smart thing in releasing all twelve songs.

The Metallica bashing has reached a point where it's pretty much expected, regardless of what they put out. Give Hardwired & Death Magnetic to another band, detaching the Metallica name from it, & people would be praising it no end. I'm no fanboy, their work isn't perfect & St Anger was a musical disaster, but the flak they get is much of an ode to the genius of their early work more than anything else.

I'm enjoying Hardwired a lot. Yeah there's some cringy shit on it but hey these guys are getting up there. Fans need to stop looking at them through a 30 year old lens. Clean it off and get a fresh perspective today's Metallica.

Lords of Summer on the yellow vinyl is pretty f*cking legit.

"Give Hardwired & Death Magnetic to another band, detaching the Metallica name from it, & people would be praising it no end." I think it would be the direct opposite. Take off the Metallica name and I doubt it would even be worth a review. It's cheap dad metal that wouldn't be on anyone's radar.

Dave and cliff wrote all the good songs. Look inside at the credits

I Had to be "THAT" guy, who could not let this grammatical error slide: Hetfield recaptured that attitude in his vocals there and the song itself is probably there ("their") best written song in the last 20 years.