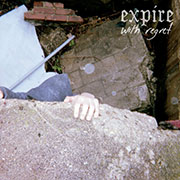 01. Fighting The Slip 02. Divide And Conquer 03. Hidden Love 04. Regret 05. Medicine 06. Vultures 07. Live Or Die 08. Fair Weather Friend 09. Turned To Dust 10. Ghost 11. The Harsh Truth 12. Beyond My Reach 13. Fear In Control
2016 Bridge Nine Records
Our score 7
by Luke Henderson
10/4/2016
They say that all good things must come to an end. For many hardcore bands, that usually means an unceremonious demise resulting from breaking down on the side of a highway after the tour van's engine has caught fire, or following the theft of gear at some desolate European squat. For others, it means surviving long enough to write your own ending, on your own terms. Fortunately, Expire has been able to choose the latter path. After explaining that With Regret would be their farewell album, the band revealed that "There isn't some huge explanation to give. To put it simply, we all decided that we would rather end it on our terms and when we want to, rather than fade off… we could toss in one of a thousand clichés about it but simply put, it's the record we wanted to leave on." Whenever a band makes statements like these, it's obvious that layers of longing and nostalgia will be attached to their final work; but the goal should be to not let these sentiments overshadow the music or color how the record is received and understood. From the first notes of "Fighting the Slip" it is plain to see that Expire is not going out with a whimper. Fans of Pendulum Swings and Pretty Low won't be disappointed by the staccato, mid-tempo verses and trudging breakdowns that Expire has long been known for. "Divide and Conquer" and "Hidden Love" keep the energy high and blend seamlessly while retaining enough identity to be memorable. "Regret" picks up the tempo and hits hard with galloping drums and quickened verses that make the slower pace of the chorus and breakdown all the more impactful. On the next track, "Medicine," there's as crushing a breakdown as the band has ever written, which saves an otherwise pedestrian track. Even with their best efforts, Expire has never been the most original or experimental band. While this can be seen as a criticism, there is something to be said for a band that can unapologetically generate straight-forward, yet effective riffs and songs time and time again. Even amid swan song, Expire sticks to the formula it knows best. "Vultures," "Live or Die" and "Fair Weather Friend" follow one another in quick succession, and while they don't offer much in terms of diversity, they are as angry and powerful as anything in the group's catalogue. The midsection of the record ends with the stand-out track "Ghost," which interplays choppy riffs with more sparse and dynamic sections in such a way that demands repeat listens. The album closes as forcefully as it began. Not losing momentum for a single song, "Beyond My Reach" and "Fear in Control" use the tried and true style of churning riffs, stark tempo changes, and venomously spit vocals that the group has long relied upon. This album, as much as anything they've done in the past, proves that they know exactly what they want to do and are unwavering in its execution. Bottom Line: It's sad to see Expire go, but they've at least left their fans with a solid farewell offering. With Regret delivers well-executed, mid-tempo, aggressive hardcore that plays within the lines but will no doubt stand the test of time.

Holy shit, a middling review and a 7 from lambgoat???!! Earth shattering.

holy shit, another complaint from the insufferable celine? earth shattering

celine just cant get over getting fired for being a shitty writer...so sad

Dig this record. Besides that I back Celine minus the over the top anger.

I liked "Everybody is going to heaven" way more

P.S. this entire album, especially the into, is a TOTAL rip off of suburban scums ultimate annihilation.

All the band members can now have a full time job at Jimmy Johns.

Good riddance. If only the rest of the hardcore scene would follow.

The guy with a girl's name being sore over every review is so funny. I hope it continues for a couple more years and then stops out of nowhere like Godfatherofsoul.

Even he couldn't handle your level of gay, and he was king gay. You're otherworldly gay.

then i am emperor gay