Prophets of Rage The Party's Over 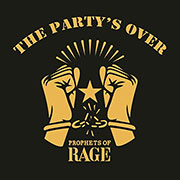 1. Prophets Of Rage 2. The Party's Over 3. Killing In The Name (live) 4. Shut Em Down (live) 5. No Sleep Til Cleveland (live)
2016 self-released
Our score 6
by Colin
9/11/2016
Prophets Of Rage are "an elite task force of revolutionary musicians determined to confront this mountain of election year bullshit." Or at least that's how Tom Morello is billing it. And boasting a lineup that includes his Rage Against The Machine comrades Brad Wilk and Tim Commerford, Public Enemy's Chuck D and DJ Lord, and B Real of Cypress Hill, how could his new supergroup not live up to that hyperbolic line of hype? Well, one glaring issue would be the notable absence of Rage Against The Machine's main force of fury – vocalist Zack De La Rocha, without whom we had already witnessed the remaining Rage members less than stellar attempt at one supergroup. Audioslave found the trio stumbling through arena rock numbers with Soundgarden's Chris Cornell - another idea that sounded pretty good on paper. The difference this time around, however, would be that instead of looking to shake their rap rock past, they would be embracing it, calling upon the extensive repertoire of all parties involved. The question then would be: could Prophets Of Rage serve as anything more than a nostalgic fluff act? The answer to that is actually complicated. The group's debut EP, The Party's Over, showcases both the best and the worst of what this outfit has to offer. Consisting of five tracks – two studio recordings and three live cuts – the record hits hard before falling into a slump. The band blazes through opener "Prophets Of Rage," a new take on a classic track from Public Enemy's 1988 release, It Takes A Nation Of Millions To Hold Us Back. Here it has been reworked with a fresh verse, new chorus and most noticeably, a hard rock backing track. Morello provides the best riff he's written in years, bringing to mind the better half of Rage's Battle Of Los Angeles, while the rhythm section grooves through the verses. The exchanges between Chuck D and B Real are smooth, each bringing their own distinct signature styles to the song. The vibe continues with the title track, and only new original song presented, "The Party's Over." The band provides the heavy backdrop, again resembling a left over RATM song. Wilk leaves space in his drumming, creating a bigger sounding riff, a trick he perhaps learned in his tenure with Black Sabbath. As the emcees rip through their verses, we are reminded why these two are some of the most influential rappers of their time. Then things start to fall apart. As we enter the live section of the record, the Prophets pull out Rage's anthemic "Killing In The Name." This was recorded during the band's first concert and it seems the emcees have yet to shake off all the cobwebs. B Real seems slightly off time and Chuck D distant and uninterested. While it obviously would be a staple of the Prophets live show, here it lacks any of the intensity of the original. The EP picks back up with "Shut 'Em Down," a track that showcases the incestual nature of this project. These three groups have been collaborating and sharing the stage together for a long time and it can be traced in particular through this song. "Shut 'Em Down" was originally released on Public Enemy's Apocalypse 91, but Cypress Hill created a new take of it for their 2010 record Rise Up, which featured a guitar track from Tom Morello. The version found here is some sort of mishmash of the two with grooving verses and a hard-hitting chorus. The album closes with a curious cover of Beastie Boys "No Sleep 'Til Brooklyn." Retitled "No Sleep 'Til Cleveland" to reference the group's guerilla performance nearby the Republican National Convention last July, it seems out of place. Not drawing from the catalog of anyone involved and seemingly void of the band's political agenda, one can't help but wonder if it was chosen based solely on being a ready to play rap rock song. In that case, "Bring The Noise" or "Rock Superstar" would have been a more fitting inclusion. Nonetheless, the band plays it well even breaking off to include the solo from Audioslave's "Like A Stone," if that's your bag. Given the pedigree involved, it's obvious the lyrical content here is politically charged, but for all the fanfare Morello speaks of about raging against the machine, it seems secondary to the music. "Prophets Of Rage" is a song about using music to change the world and in the late eighties that was pretty powerful. The effects aren't the same today, though. In an age of mobile news sites, video blogs and Facebook memes, Prophets Of Rage's message is sure to be washed out. Bottom Line: Prophets Of Rage won't have any hard hitting political impact when all is said and done, but really who cares? If The Party's Over is a prelude to more things to come (more originals, please), then I'm satisfied. Sometimes it's okay to sit back and just enjoy the music.

CELINE IS WORST THAN THIS ALBUM

tom morello is a bigger hypocrite than celine. at least morello is successful, celine has a fake law degree, a fake wife, and is only known for being insufferable on internet messageboards

Celine thinks he is some kind of a god-tier review master. Your thesaurus game is weak, bro. You write like someone itching for praise from his 6th grade english teacher, cause mommy wouldn't give it to you. Stick to your work, sandwich artist. thanks.

RNC was this July you freak

Would you give licking a dick a 6 as well?

Satisfied ? This record is awful and Morello should kill himself. He and his band ARE THE MACHINE and this is nothing more than a cash grab. If it were anything else they'd be playing outside courthouses uninvited and in the trenches with people protesting and rioting. I'm shocked B Real and Chuck D are a part of this but the fact is I hear they're both kinda broke these days which could explain the cash grabs purpose

saw these fools in camden... walked out after 3 songs... certainly raged that they took my $$$ for that shite

BiastFear did "No Sleep Til Cleveland" back in 2000 on All Angels Scream.