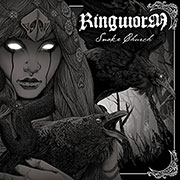 01. Snake Church 02. Brotherhood Of The Midnight Sun 03. Fear The Silence 04. The Black Light Of A Living Ghost 05. Destroy Or Create 06. Shades Of Blue 07. Innocent Blood 08. The Apparition 09. Believer 10. The Razor And The Knife 11. Angel Of War 12. Temple Of The Wolves
2016 Relapse Records
Our score 8
by Luke Henderson
8/14/2016
While essentially unrecognizable in both form and sound compared to their earliest work, Clevo-hardcore-turned-crossover-metal mainstays Ringworm have always known how to write unabashedly aggressive records. Trading in punk influences for an outright metallic foundation, this group has settled in as one of the more reliable and impressive metallic hardcore bands around. In fact, 2014's Hammer of the Witch was their most consistent and impressive outing since The Promise, released over 20 years prior. While wildly different records, both capture an energy and aggressive edge that makes the records stand out amongst a number of the band's other notable release. As a result, Hammer of the Witch's follow up had big shoes to fill. As a whole, Snake Church is very much a logical continuation of its predecessor, although arguably not quite as impressive. The title track starts the album off with an eerie intro followed quickly by a frantic barrage of the band's signature blend of hardcore and metal. One of the most exciting tracks on the record, this opening salvo sets expectations high, with notable transitions, superbly executed guitar work, and Human Furnace's unmistakable vocals piercing through it all. Not wanting to squander the momentum, "Brotherhood of the Midnight Sun," "Fear the Silence," and "The Black Light of a Living Ghost" keep up the rapid pace and unrelenting drive, while each maintains its own style and tempo. Through the heart of the album, tracks like "Destroy or Create," "Innocent Blood" and "Believer" do underscore that Ringworm is somewhat singular in their focus and approach. Musically and vocally there isn't a great amount of diversity between these tracks, but that doesn't mean that they come across as stale or monotonous. Rather, it becomes readily apparent that this is a band that knows the sound they want and is unrepentant in their pursuit of honing their approach to it. One song that does diverge from the relentless sonic approach of the rest of the album is "Shades of Blue." Not only does this song, the sixth of twelve tracks, provide a nice mid-album interlude, but it also shows that when they want to, Ringworm is able to branch out and produce interesting work. As one of the most memorable pieces on the album, "Shades of Blue" is a slower, more intricately developed song that uses churning, repetitive guitar lines and layered solos to slowly build momentum before letting it conclude in a chaotic crescendo The album finishes as strongly as it starts, with the driving riffs of "The Razor and the Knife" and the galloping beats of "Angel of War" each contributing to a strong tail end of this impressively consistent offering. Finally, "Temple of the Wolves" seems like an appropriate track with which to close the record, as it is as straight forward, belligerent, and energetic and any of the preceding songs. While many albums tend to finish with longer, more subdued, experimental tracks, Ringworm fittingly goes out swinging with the same fury that they started with. Bottom Line: Ringworm continues to deliver consistently exciting and unapologetically aggressive music that makes them stand apart from many of their counterparts. For fans of their more recent work, Snake Church delivers on all fronts.

These guys have a right to be with Kirk Hammett. I've always thought that the Victory Style samplers were a great way to introduce kids to hardcore, but where was Ringworm?? They are also like Hatebreed. Everyone wants to be like Hatebreed, but with Kirk on guitar they could be. Human Furnace made music like it was. He is not Dwid, but he is real. Please be fair to them. He is like me, a true fighter. Ringworm got support from Derek Hess and no one cares?? Why?

Sorry I confused Integrity with Hatebreed. Hatebreed is good too but different. They are more like NYHC even though they are from Connecticut. Integrity is a clevo band. They used to be very well known and got some respect in the scene. But they refused to adapt and now they are underground again. Victory is too pssy to release their music now.

This album is boring.

What does kirk hammet have to do with Ringworm? Confused.

they both drilled your mom vv

Remember when Human Furnace and Dwid Hellion had a wrestling match back in the nineties. Titled as the fight for the crown of cleveland. Chubby Fresh was supposed to be the ref. But instead he decided to get in on the action and bit Dwid in the ear! lol Dwid shook him off, but landed in a close line by Human Furnace. HF was crowned King of Cleveland but Dwid never sccepted it. He's held a grudge ever since...