Nails You Will Never Be One of Us 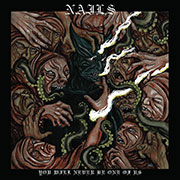 01. You Will Never Be One of Us 02. Friend to All 03. Made to Make You Fall 04. Life Is a Death Sentence 05. Violence Is Forever 06. Savage Intolerance 07. In Pain 08. Parasite 09. Into Quietus 10. They Come Crawling Back
2016 Nuclear Blast Records
Our score 9
by Luke Henderson
7/8/2016
As a bunch of hardcore veterans playing grinding metal, Nails has always had the potential to be slightly too hardcore for metal fans, and too fast and metallic for their hardcore brethren. Instead, they consistently seem to walk between two worlds, seamlessly co-existing in often antagonistic scenes while garnering widespread respect and accolades. While this may seem odd to those unfamiliar with the band, for those who have heard their previous LPs it's not hard to understand exactly why Nails is able to command respect from such a diverse listening population. Impressively, their newest offering, You Will Never Be One of Us, is probably their best work to date. Starting off with the title track, this record wastes no time delivering one of the album's best songs. After an ominously repetitive intro, "You Will Never Be One of Us" breaks in and immediately delivers bludgeoning riffs and machine-gun drumming that still manage to retain the dynamic elements necessary to make the song both interesting and impactful. Following this strong start, "Friend to All" and "Made to Make You Fall" are even faster and shorter, expertly interspersing blast beats, solitary bass lines, and rapid-fire riffs that maintain the momentum of the song throughout. In addition, "Made to Make You Fall" (as well as the later track "In Pain") have brief, albeit impressive solos, that would make any Slayer fan take notice. Another album highlight is "Life Is a Death Sentence," where the group's hardcore pedigree begins to shine through. After a grind-inspired start to the song, the remainder of the track shows off singer/guitarist Todd Jones' ability to still write memorable, chugging hardcore riffs with the best of them. Following this, "Violence Is Forever" allows the group to delve into more elaborate song writing. As one of only two songs on the album to clock in at over two minutes, this track is a balance of mid-tempo verses (at least by Nails' standards) and slower, trudging breakdowns that gives the album a well-placed break from the relentless speed of its earlier tracks. "Savage Intolerance," "In Pain," and "Parasite" continue to demonstrate the band's exceptional ability to deliver a series of unceasing barrages without having the songs bleed together into an indistinguishable and monotonous mess. Each track has enough distinct qualities to differentiate itself from the others, while still maintaining the overall stylistic and sonic consistency of the album. Similar to "Depths" on Unsilent Death and "Suum Cuique" on Abandon All Life, You Will Never Be One of Us saves the longest and most dynamic track for the end. "They Come Crawling Back" strikes a menacing mood via an intro filled with dissonant tones before building momentum with galloping drums and churning riffs, and eventually fading with the hypnotic repetition of plodding, layered guitar lines. Bottom Line: Not only is this arguably Nails' best album to date, it is also one of the year's best thus far. Metal and hardcore fans alike should be adding this record to their rotation posthaste.

This album will go down as a classic. Not only because it's almost flawless, but because it kicked of the whole Bizarro Grain revival.

Yawwwwn, overhyped turd. This isn't even the best grind album this year

Nails - metal for Hxc that know nothing about metal

Todd Jones is so meta he will never be one of them.

Todd Jones taught Jeff Hanneman how to play guitar solos. Many years later, Todd manifested himself as a spider to bite Hanneman and regain his powers. He then gave Jeff the final beer that triggered his cirrhosis into killing him, thus closing the circle and ensuring that Todd finally ascend to planar form as the One True God Of Metal.

Todd Jones is the greatest thing since sliced bread, which he himself invented by sawing his riffs through a loaf of bread.

It hits hard. It's fast. It's good but honestly I just don't get why this is being called ALBUM OF THE YEAR and garnering so much attention. HXC/Metal fans consider themselves to be above such petty things as "hype" but this band/album is a perfect example that they need to be told what to like and will jump on any hype-train and ride it till something else comes along. I'm sure it will go down as a classic but I get bored listening to it.

I can't even hear the riffs!!!! Like for real the mix is all crazy on this album. Literally sounds like the guitarist could be playing any variation of some drop tuning mediocre grid core. The bass is just non existent and there's too much distortion on the drums and vocals. Sounds like shit!! Do yourself a favor and listen to Dropdead instead....

Untalented garbage "musicians" releasing a garbage album. Hey LG, find someone to do the reviews that isn't a complete f*cking idiot with no brain or head or ears attached to the head that they don't have. User reviews show how truly awful this album really is.

everything on this album is so muddy and all bleeds together its really just loud as fck guitars with the gain all the way up and fast drumming. nothing but pure racket if you ask me.

you little kids are hilarious.

this is ok, but this band is not nearly as good as people say. and this whole 'you will never be one of us' crap just reeks of the cool kid club that the hardcore and metal scenes usually turn out to be despite all the bs about the 'scene' being a place for misfits. more like a place for try hards.

I'll stick to Entombed and Nasum.

I'll probably eventually check them out.

Glad I'm not the only one who thinks the mix is off. If you turn the bass settings on your stereo to zero you can sort of make out the riffs. It just way too smashed sounding and I usually really like Kurt's production.

this band is hipster hardcore trash

you will never be one of us is my favorite track right now.

i like Nails.. but i always thought it took a lot from PHOBIA.. check out the album Cruel

Faigs! You are all just mad that you will never be one of them, or one of us, or one of one. Try listening to this on a stereo that costs more than $15 earbuds, because on my Onkyo TX-NR1030 with the Infinity speakers this shit sounds like a war. Bass like a tank, riffs like machine guns, and drums like... well really loud drums. Step up your stereo game f*cks and get real. PAID FOR BY NUCLEAR BLAST RECORDS

Todd Jones transformed himself as the skin on his ol' ladies face and the guy left the juice from my tool clinging to his cheek.