Walls Of Jericho No One Can Save You From Yourself 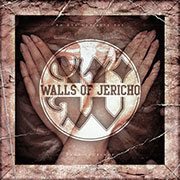 01. Intro 02. Illusion Of Safety 03. No One Can Save You From Yourself 04. Forever Militant 05. Fight The Good Fight 06. Cutbird 07. Relentless 08. Damage Done 09. Reign Supreme 10. Wrapped In Violence 11. Anthem 12. Beyond All Praise 13. Probably Will
2016 Napalm Records
Our score 6
by Luke Henderson
4/14/2016
In the early 2000s, Walls of Jericho were able to gain well deserved praise for their brand of metallic hardcore with releases like The Bound Feed the Gagged and All Hail the Dead. While not overly inventive, these albums stood out amongst their metalcore compatriots by interweaving elements of female-fronted hardcore and metal while still retaining a punk ethos that ensured that each release was as lean and ferocious as possible. Despite later missteps like the Corey Taylor-guided Redemption EP, Walls of Jericho has always been fairly consistent and reliable, which is an apt way to describe their latest offering, No One Can Save You From Yourself. Following an ominous, mood-setting intro, "illusion of Safety" wastes no time showing that the band has steered away from the Redemption-era melodic endeavors in favor of the straight-forward brand of metallic hardcore that fans of their earlier work are more familiar with. Following this quick introduction to the record, the title track and "Forever militant" are lengthier and more developed offerings, but neither lose the intensity of the opening song. Nor does frontwoman Candace Kucsulain, whose delivery is as savage as ever. Chugging riffs and distorted breakdowns abound, these songs are undoubtedly intense, yet fail to leave a lasting impression, which is a chronic problem on much of this album. Thankfully, "Fight the Good Fight" and "Cutbird" are more dynamic and well-crafted. Their gang vocals, bludgeoning riffs, and vocal diversity make them more impactful than songs like "Reign Supreme" and "Wrapped In Violence," which fail to incorporate any meaningful ebb and flow in their structure, and ultimately meld together into a largely indistinguishable mass. The heart of this album lies in tracks like "Relentless," despite its unnecessarily repetitive intro, "Damage Done", and "Anthem." These songs all show that Walls of Jericho, despite their prolonged hiatus, still know exactly how to create a well-constructed, anthemic, hardcore song. The inspirational tone of "Relentless" is matched with machine-gun riffs layered over galloping drums to create a song that is both thoughtfully arranged and viciously executed. Similarly, "Damage Done" hits hard with memorable riffs and copious amounts of gang vocals, and "Anthem" crashes to a unique and vocals-driven ending after building to a fevered pitch. Unfortunately, the album returns to its competent, yet lackluster form towards the end. In particular, its closing track, "Probably Will," is a misplaced return to the clean vocals and atmospheric instrumentals that plagued some of the band's pre-hiatus releases. A weak note on which to end the album, the song isn't particularly well-crafted, and is almost immediately forgettable. Bottom Line: Fans of Walls of Jericho will not be shocked by this post-hiatus offering, but they won't necessarily be overly impressed. While No One Can Save You From Yourself does have a few standout tracks, there simply aren't enough of them to suppress the tedium that creeps in upon repeated listening.

are you f*cking kidding me? YOU WANT MONEY BECAUSE YOU SPENT MONEY MAKING AN ALBUM? SELL THE ALBUM, SELL MERCH, GET A JOB, DO SHOWS. YOU LAZY f*ckING SHITHEEL c*ntS

Wow another middling score from lambgoat

I love this album. I think it's their second best, behind With Devils Amongst Us All. I think all the songs are memorable, and the title track is my favorite. The closer, "Probably Will," is a cover song so they didn't "craft" it. I like it and it inspired me to look up the original by Concrete Blonde. I give this album an 8 out of 10.

lol @ not knowing its a cover.

No one can save Walls of Jericho from repeatedly embarrassing themselves.

They were so good in the early days. Funny to find out Corey Taylor was responsible for the release that finally made me say, you know what f*ck these guys. Redemption was a steaming pile of shit that will be hard to get away from. I overlooked this album and will continue too, because I'm not being tricked into listening to another redemption-esque album. Don't care what anyone says.

No one can save Walls of Jericho from repeatedly embarrassing themselves. no one can save this message board from anonymous shit heel posters sounding off on their irrelevent opinions

This music sounds more desperate-to-connect than anything I've ever heard.