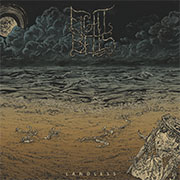 1. Hating 2. Landless 3. Hold My Breath 4. The Mortal's Suite 5. Touch Me
2016 Battleground Records
Our score 8
by Daniel Marsicano
4/5/2016
A mysterious energy courses through Landless. It's tough to pinpoint whether it's a haunting chill or a reflective temper. Eight Bells put out similar vibes on their debut, The Captain's Daughter, which captured a fertile alliance of stylized prog rock, captive doom metal and stifled black metal. Landless continues this tense balance, criss-crossing genres to keep the tension at a threatening boiling point. When it tips over, the furious uptake in tempo and noise is mesmerizing. That praise does come with a caveat; Eight Bells prefers to devote the time to get to those moments instead of throwing them out carelessly. That's why a song like the title track can run almost 13 minutes without emerging as some tired opus. In a manner that echoes the title track to The Captain's Daughter, the band doesn't give into the temptation to completely let loose for extended periods of time. There are spurts, like the direct blasting that lingers for a bit after the introduction, but ambient uneasiness is at the center of this song. A prominent component of Eight Bells is the vocal chemistry between guitarist Melynda Jackson and bassist Haley Westeiner. Though there are temporary detours into raspy screams that could have come from a one-man black metal bedroom project, the harmonies these musicians lock into is a compelling feature. Most of the time, they are connected, giving lines like "When the pain of hating fades/There is only the relief/Of indifference how it grows" enough bravado to come off as genuine. Traditional hooks -- the kind of poppy, upbeat, unforgettable charm -- don't seem to be a major focus. These five songs float in an ethereal soup, though the band does find a way to sneak a hook or two into "Hold My Breath." Placed dead center in the album, it's as catchy as Landless gets. With a very straightforward "repeat the song title" section and an even split of their lighter and aggressive sides, "Hold My Breath" is a great sampling for those trying out Eight Bells for the first time. Drummer Rae Amitay, who has done some stellar work with underground darlings Thrawsunblat (Wanderer On The Continent Of Saplings being an overlooked gem) and Immortal Bird, is the new musician in the group. She holds everything together, even with limited influence in an atmospheric cut like "The Mortal's Suite." On the topic of that song, it's the shortest composition here, yet has a substantial weight that allows for reflection before momentous guitars overwhelm "Touch Me." Eight Bells is on the threshold of picking up some major momentum with Landless. The sophomore record is deceptive in its mellowness, with a sinister outpouring sandwiched in. Though not a very long album, there are fine layers that should be dug into to uncover the band's emotional overload. Bottom Line: Landless is a worthy follow-up to The Captain's Daughter and expands the excellent template already in place.

what the hell is this

Lol...."the latest" eight bells record. Like we're all supposed to know who the fck this band is.

uhg... I like their records just fine, but I saw them live and like... shit, maybe just one of them should sing at a time, and maybe just the one who has a sort of understanding about notes, and maybe they just shouldn't sing at all.

Just listened to one of the songs off this album. I knew there was a reason that I've never heard of them. Garbage. Eight Balls, is right.

Saw them live with vektor and voivod....singing was horrible but drummer crushed. Vastly prefer her other projects although the album sounds decent.