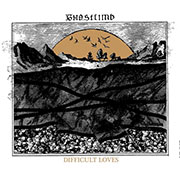 01. A Gobi of Suburbs 02. Sense of Place 03. Hostility Compelling 04. Wall of Books 05. Difficult Loves 06. Brushfire 07. Folds in the Sheets 08. Nine 09. Addressee Relocated to Cemetery 10. Treason Fluently 11. Life’s Blood
2016 Vitriol Records
Our score 9
by Nick
2/26/2016
Lately I've been considering the idea of what my favorite records, or accumulated musical tastes in general, look like in the rear view mirror. I've learned enough about myself to understand when I need to crank an Iron Lung record at my desk just to get through a Tuesday afternoon, when Hot Water Music's Moonpies for Misfits is the perfect selection for a quick drive across the city, and when the beautifully metallic edge and deep seeded angst of Converge's When Forever Comes Crashing will smooth out some of life's rockier moments. What I had stopped considering a little while back is whether these tried and true elements of my listening life would ever merge successfully, without any attenuation of the blasting ferocity, emotional grit, or carefully wielded atonality that made each of these so powerful. That was a mistake. Difficult Loves, the fourth full-length by Southern California's Ghostlimb, is that flawless merger. If a seamlessly balanced musical foundation isn't enough, this latest offering more heavily employs its literary influences as a means to resonate on intellectual levels as well. The record's title is a nod to a collection of shorts by the late Italian master storyteller Italo Calvino, a writer who, like the style-blending dudes in Ghostlimb, also refused to be confined to a single area. The Calvino reference goes even deeper if one considers the whimsical experimentation in the spectrum of genre-fiction of Calvino's "If on a winter's night a traveler" in relation to Ghostlimb front man Justin Smith's (alleged) involvement with the genre-film-grinders in Graf Orlock. Just as Calvino understood that reading was an activity meant not just for stimulation, but also for fun, so too does Smith with his musical endeavors. Moving to the record itself, the opening track "A Gobi of Suburbs" sets the stage for this latest slab of dark, but thoroughly melodic hardcore. The fast, precise riffs are front and center and the ability of the band to throw in short, catchy progressions that foreshadow the coming of an uplifting closing breakdown is key (and very much a proven element in the Ghostlimb repertoire). While things have eased up ever so slightly from the days of 2008's Bearing & Distance, there are definitely plenty of tracks that throw breakneck speeds and riffing to match at the listener (see the 36 second ripper "Sense of Place" and some of the intensely gratifying passages of "Addressee Relocated to Cemetery"). There is even some newer, highly catchy territory here with "Wall of Books," a mid-paced track with a chorus ever so slightly accentuated by some layered singing that easily lodges itself in one's memory. However, it's Difficult Loves' balance and subtle inclinations toward broader songwriting arcs that makes it their most accomplished record to date. The six minute long title track (feel free to pause and pontificate on what it means to live in a future where Ghostlimb writes six minute songs) showcases this aspect effortlessly. Transitions from impressively technical fretwork to full speed ahead punk charges are executed with great attention to detail, and the addition of light, almost orchestral guitar leads lights the way to a spare, melancholic interlude. At that moment, it is the band at its softest; the hard shell is removed and its deepest vulnerability is left out in the open. The lessons in dynamics that showed up in Infrastructure and Confluence apply here, and as the track launches back into an escalating build and the concluding passionate dirge, it's not hard to classify these dudes as kings of their craft. A lot has been written of Smith and his involvement across all multiple hardcore mainstays, but not nearly enough has been said about the drumming and bass that anchors this finely orchestrated trio. Drummer Alex Mcleod packs both the technical chops (there are some seriously rad moments in "Hostility Compelling") but also the awareness to know when a crisp, driving punk beat is exactly what's needed. Similarly, bassist Neal Sharma rips through lightning fast lines just as easily as he can back off into a melodic groove. In a world of compressed audio and tin-can headphones, he gives the listener a big reason to take the time to appreciate this record on a stereo capable of generating some lower hertz. Difficult Loves is Ghostlimb at their finest and is truly a landmark record for those who grew up marveling at killer blast beats, feeling the weight of Converge's dirges, and drinking beers to the Leatherface and Hot Water Music split. But it's also evidence that everything, in fact, has not been done before and while the sharp ecstasy of youth may have slowly slipped away, it does not behoove anyone to remain in the trees, cradling only the records of yore. There is good shit down here on the ground, too. Bottom Line: It's entirely possible that Ghostlimb broke into my apartment, cased my record collection and wall of books, and wrote Difficult Loves for me. It's also possible that these dudes are simply punk lifers and have continued to find new ways to merge their own intellectual pursuits with forward thinking hardcore that doesn't forget to pay homage to the past. This will easily hold as one of the best of 2016.

What a self celebrating douche. This might be the most pretentious I've ever read in the 10+ years I've been using this site.

Finally a review hits the nail on the head. Ghostlimb are easily one of the greatest bands playing heavy music.

Celine is just mad because his review was fraught with errors and he has shit taste.

Happy to see this band getting the attention they deserve. Awesome album!

Deep-seated was the phrase you were looking for