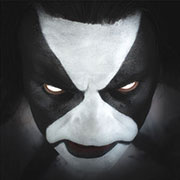 01. To War 02. Winter Bane 03. Ashes of the Damned 04. Ocean of Wounds 05. Count the Dead 06. Fenrir Hunts 07. Root of the Mountain 08. Eternal
2016 Season Of Mist
Our score 7
by Daniel Marsicano
2/12/2016
The acrimonious split between the members of Immortal was a prominent headline last year. The band broke up, and vocalist/guitarist Abbath Doom Occulta went his own way with a solo project. But then the remaining two members announced that Immortal was still together, albeit without Abbath in the ranks. Buried underneath the official PR-friendly quotes, legal speak, and back-and-forth blame game was the news that both groups were putting out new records. Abbath reached the proverbial finish line first with this self-titled release, an album that Immortal could have released if he was still in the group. If anyone has a vision of what an Immortal album would sound like in 2016, these eight songs are it. It's not hard to imagine that Abbath had these ready for Immortal before the group splintered apart, taking his ideas with him and slapping his own name on it. Going solo doesn't mean he's gone avant-garde on us, unless you find the sampled horns -- from a ‘90s keyboard found covered in dust in Abbath's basement -- on "Ashes of the Damned" to be enlightening. What this album does possess is top-notch production, great backing musicians, and vocals laced in contempt and basking in filthiness. Drummer Kevin Foley (a.k.a. Creature) and bassist King Ov Hell play alongside Abbath in the studio, and these guys have a firm hold on what he is going for (though they've both since exited the band). King Ov Hell's subtle leads on "Root of the Mountain" and "Eternal" are a boon to the proceedings. Speaking of "Eternal," this Abbath album has the capacity to annihilate tempos in a way that will be familiar to fans of his former group. The fact that this track is saved for the very end, instead of a more atmospheric cut like "Winter Bane," is a great move. With its crisp spoken word passages and acoustic guitar flourishes, "Winter Bane" is as far left-field as Abbath gets. This is what constitutes "experimental" in Abbath's twisted world. There's a fair mix of fierce compositions and reserved grandeur going on, all of it immersed in quality. There's little waste to be found, with the album coming in at about 40 minutes (not including bonus tracks). The compact style is something Immortal has been known for throughout their career, an approach that lends itself to avoiding staleness. Nifty solos on a few tracks, including "Fenrir Hunts," add to the effort. When Immortal eventually releases an album, the comparisons between it and this record will fly around Internet forums and comment sections. Most likely, it'll sound like this, just with a different vocalist. That's perfectly fine because Abbath's eponymous release is satisfying. It's black metal, written by a man who has been playing it forever. There isn't much more to expect out of him than that. Bottom Line: The former Immortal vocalist/guitarist goes out on his own with an Immortal record that isn't an Immortal record.

this guy is a way better reviewer than that celene idiot

The reviews on here have declined immensely. Tip toeing around the obvious, wishy washy, riding the fence reviews are not what I expect from lg

LG needs that dude celine to review again, he was a straight shooter with a silver tongue and a eye for that really, real shit.

Who cares who does reviews for LG. There's only one every month or two anyways. I can't imagine it's that hard to find someone to write reviews more regularly.

Having only a picture of yourself on your album cover strikes me as incredibly narcissistic.