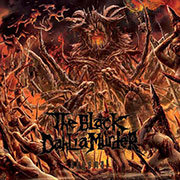 01. Receipt 02. Vlad, Son of the Dragon 03. Abysmal 04. Re-Faced 05. Threat Level No. 3 06. The Fog 07. Stygiophobic 08. Asylum 09. The Advent 10. That Cannot Die Which Eternally Is Dead
2015 State Of Grace
Our score 8
by Daniel Marsicano
9/22/2015
Since 2003, The Black Dahlia Murder has put out an album every two years without fail; no extended time in the studio delaying a release or a need to go on a hiatus to rediscover some lost creative drive. It's been record, tour, record, tour; an endless motion that catapulted the group to the upper echelon of death metal. Their callous, yet nimble, sound has done well for them over the course of six studio albums. They've either been steadily improving or consistently sharp with every record since Unhallowed. That kind of persistence is commendable, and one that has not fallen off between Everblack and their new album, Abysmal. The worst thing you can remark about Abysmal is that it's exactly what The Black Dahlia Murder would put out. The biggest takeaway from this album is the unrestrained composure of its songwriting, which cuts the song lengths down slightly. Only the opener and closer go past four minutes, a contrast to Everblack, half of whose songs went over five minutes. That difference has given these songs a honed-in focus, like an evolved take on Deflorate. This isn't to say that Deflorate was a terrible album, but revisiting the effort in 2015, that record was a precursor instrumentally to the dazzling Abysmal. The guitar solos are a technical showcase, flying into the music with tantalizing craftsmanship. Guitarist Ryan Knight evokes the spirit of Marty Friedman on the solo of opener, "Receipt." Ever since joining the band in 2008, Knight's supercharged playing style has the power to make a person take notice immediately. The urgency of "Vlad, Son of the Dragon" is not a limited trick, but a declaration every second of this album lives by. Drummer Alan Cassidy hits some extraordinary speeds with his hands on the title track and "Asylum," blurring the percussion underneath the scornful guitar riffs. It's also great to hear prominent bass lines weaving through the dense sonic forest, not something one is likely to encounter on previous albums. There's rough subject matter roared out by the always-reliable Trevor Strnad, including death and pedophilia, though the latter is given a horrifying twist on "Threat Level No. 3." On this scorching track, the pedophile is chemically castrated, forced to wander the same streets he terrorized years ago. Switching between something as nauseating as that to a song about Vlad the Impaler could be a clunky transition, but The Black Dahlia Murder make it seamless, as always. Though the signature unchecked tunes are stellar, the bits of progression sprinkled on Abysmal are mixed. There's a string section to give an orchestral swell on the intros to "Receipt" and closer, "That Cannot Die Which Eternally Is Dead," but their full potential goes unrealized. It could have been a good chance to solidfy the album's continuity, perhaps with the symphonic aspect being placed in an outro to a song somewhere in the middle. The same goes for the gloomy "Stygiophobic," which has a wonderfully low-key start that builds and builds without ever reaching a breaking point. Everblack wasn't an evolutionary album, and neither is Abysmal, but not every album needs to buck conventional wisdom. The Black Dahlia Murder has clearly found themselves at the head of the current death metal class, a group that hasn't sacrificed its sound for a wider audience or tacked on some lukewarm songs to fulfill contractual obligations. The improved nuances, not only with musicianship but in melodic tendencies, make these ten songs valuable additions to their burgeoning discography. Bottom Line: Abysmal ups the pristine aggression, making a ruckus that's just cause for 40 minutes of celebratory head banging.

Their callous, yet nimble, sound

Forgot to credit metal injection for the review

hey guys metal jesus here and i'm back please check out my channel on youTube thanks!