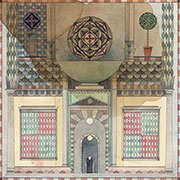 01. Elektra 02. Old Friends / New War 03. Dawkins Christ 04. Françafrique 05. Thought Is Blood 06. War On The Palaces 07. Destroy The Man 08. 366 09. Servants Of Death 10. Useless Europeans
2015 Epitaph Records
Our score 6
by Luke Henderson
7/8/2015
What's harder than toiling as an underground band, slogging it out playing basement shows, and unceremoniously breaking up in the middle of an ill-fated tour just in time to see your now-defunct band lauded as avant-garde innovators after the fact? Apparently, it's trying to emerge out from under the weight of such a prolific legacy. Refused's mythical status has grown with each passing year following 1998's The Shape of Punk to Come (TSOPTC), which ended up simultaneously being the band's breakthrough and swansong record. While the group's long-awaited reunion saw them playing large festivals in 2012, it didn't appear to be much more than a few one-off shows, which allowed the band to play to the large, adoring crowds that hadn't yet materialized when the group initially disbanded. Only following a subsequent hiatus and the loss of guitarist Jon Brännström did it appear that Refused had transformed from reunion touring act into a fully reformed band that was working on new material. Although many try, it's hard to downplay the importance of this group and the impact that The Shape of Punk to Come had on punk and hardcore in the late ‘90s and early 2000s. While few bands actually tried to emulate the record's eclectic blend of instruments and styles, or were able to duplicate the band's focused brand of anti-capitalism, it became regularly cited as one of the most influential records of the time. All of this is worth mentioning because this is the history from which Refused's new album, Freedom, emerges. Needless to say, for some the anticipation has been palpable, as this record is the first piece of music from Refused in 17 years, and is the follow-up to an album that many consider one of the best of its time. "Elektra" starts the record with the group's unmistakable blend of hypnotic guitar lines and building drum beats. This song, a collaboration with Swedish hit-maker Karl Johan Schuster, is very much in line with the group's work on TSOPTC, albeit a much slicker and well-produced version. "Old Friends/New War" introduces a voice modulator and a track of rhythmic breathing, which sets the stage for the album's most adventurous track. The song includes memorable guitar riffs and impassioned vocals, but still seems disjointed at times. Refused have never shied away from pushing musical boundaries, but that often comes with mixed results, as it has on this song. Fortunately, the next track, "Dawkins Christ," demonstrates that Refused still has the ability to write incredibly direct, aggressive, and distinct songs. Undoubtedly a highlight of the record, this track wouldn't sound out of place in the band's back catalogue and yet does not seem dated on this album. Continuing Freedom's oscillation between hard-hitting and experimental is "Fracafrique." Although well-structured, layered, and striking, it very much seems out of character, sounding more like an outtake from singer Dennis Lyxzén's defunct rock band, The (International) Noise Conspiracy, than it does a Refused song. In fact, this isn't the only time that The T(I)NC comparison can be made on this album, as the unabashedly poppy "War on the Palaces" is an infectious track that uses phaser-laden guitars and a robust horn section to create a song that would easily fit on any of The (International) Noise Conspiracy's later releases. Returning to form, "Thought is Blood" skillfully demonstrates the continued ability of this band to blend seemingly incompatible musical elements in unique and exciting ways. Alternating between atmospheric and chaotic, it fuses subdued melodies with stomping riffs and grating screams in such a way that each transition is both abrupt and completely intuitive. Similarly, "Destroy the Man" demonstrates the group's willingness to take chances, albeit with mixed results. The song is innovative but seems to lack direction, and the backing vocal tracks are distracting and misplaced. A clear standout, "366" is one the most straightforward throwbacks to TSOPTC, while adding enough new elements to sound fresh and invigorated. It uses driving rhythms and infectious hooks to elevate it above many of the stronger songs that populate the record's latter half. Sadly, "Servants of Death" and "Useless Europeans" close the album in moderately bland fashion, lacking the risk-taking originality that runs through much of the rest of this record. While both songs have notable moments, neither one resonates on a grand scale. Bottom Line: Legacy aside, Refused has delivered an eclectic and inventive album that doesn't shy away from pushing musical boundaries. Unfortunately, several uninspired songs and a lack of urgency prevent the band from recapturing the potency of their back catalogue.

Boring and a little too pretentious of an album for me. And I like most of their older material. Refused should have stayed "f*cking dead" ... but $$$ calls.

Great album. Took a few spins to finally "get it", or whatever.

"What's harder than toiling as an underground band, slogging it out playing basement shows, and unceremoniously breaking up in the middle of an ill-fated tour just in time to see your now-defunct band lauded as avant-garde innovators after the fact?" umm

making all kinds of money off the "anti-capitalism" trope eh?? refused are fvcking clueless.

I'D LET THIS WHOLE BAND ENTER ME RECTALLY

AT THE SAME TIME.

Mayby they just like playing music?? The new album grows.. I will not miss a refused show. Death to all haters, we don t need u.

this record was the biggest disappointment of the year

I ate 5 burritos, I became shit, I ate, went back to shit and got into the CD player.It sounded better than Refused album.

This albums is my favorite.