Six Feet Under Crypt of the Devil 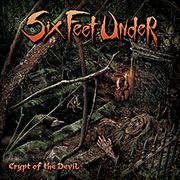 01. Gruesome 02. Open Coffin Orgy 03. Broken Bottle Rape 04. Break The Cross In Half 05. Lost Remains 06. Slit Wrists 07. Stab 08. The Night Bleeds 09. Compulsion To Brutalize 10. Eternal in Darkness
2015 Metal Blade Records
Our score 3
by Daniel Marsicano
5/17/2015
Six Feet Under were in the need of some life after several clunky records, and 2012's Undead did just that. With new musicians involved in the songwriting and vocalist Chris Barnes sounding inspired, the band's fortunes seemed to be turning around after years of sonic dreck. Its follow-up, Unborn, felt like a collection of B-sides, the death metal equivalent of Metallica's Reload. But Unborn was released about nine months after Undead, so the timing between albums was very tight. Not so with Crypt of the Devil. Barnes had more time to gather material, but instead of using his live-line up or any of the studio musicians he brought in for Undead and Unborn, he sought out help from the members of Cannabis Corpse. The lighthearted, yet explosive group of pot enthusiasts had dealings with Barnes on a song from their most recent effort, From Wisdom to Baked. Considering that collaboration, and Barnes' appreciation for the smokier side of life, it's not a surprise that he would get that group to help him write an album. What is shocking is the result, which negates all the positive gains made with Undead and Unborn. What were once violent, abrasive lyrics have downgraded into parody, a running gag that isn't funny the first minute, and even less so thirty minutes in. Nonsense like "Broken Bottle Rape" goes for the shock value, until you listen to the song and realize there's nothing offensive about it except for how bottom-of-the-barrel it scrapes with its meek riffage. Barnes' lyrical prowess has gone into Max Cavalera territory, with "Break the Cross in Half" repeating its bland title exactly fourteen times. Hell, the whole chorus is just that; the song title spat out like a dementia patient trying to remember what they had for breakfast that day. Not that there aren't glimmers of creativity to be found in these ten tracks. There are times when the band seem to be on the right track, only to flail and stumble. "Open Coffin Orgy," its inane title aside, has a fantastic groove in its initial moments, infectious in its directness. Unfortunately, it's only used in the introduction before the mundane verse shuffles in. "The Night Bleeds" brings back that groove, along with a scorching guitar solo, until Barnes opens his mouth 72 seconds in. Then the realization kicks in again that this is another middling Six Feet Under album. To the credit of the backing musicians, they adjust their usual playing to better fit Six Feet Under. With that comes some concessions, mainly with the bass. One of the best parts about Cannabis Corpse is the prominence of the bass, yet other than a few short spurts of lead work, it's pushed into the background. The same goes for the drums, which only get a couple of breaks to go off in a more extreme direction before being reigned in by a rigid formula of half-baked death metal. Crypt of the Devil is like Nicolas Cage's career since 2005: a few decent performances, but when it goes south, the failure resonates for days after. If Barnes hadn't run out of ideas before, he's certainly running empty now. It wasn't a terrible idea to bring in outside talent -- the members of Cannabis Corpse do a fine job instrumentally -- but whatever spark was ignited before has now diminished into a tiny glow. That glow gets dangerously close to burning out with this release. With a revamped studio line-up, Crypt of the Devil could have been a jolt of newfangled ideas. Instead, this is death metal mush, a bitter concoction of expired ingredients spoon-fed to us like we are drooling toddlers leaning over our high chairs. Another AC/DC covers album would be a welcomed sight over gruel like this. It offers nothing new, nothing that Barnes hasn't already tried for the past two decades. After the comeback that Undead provided, Barnes is back to slumming it up with uninspired, yawn-inducing music. Bottom Line: Six Feet Under regress after a few promising releases with an uneven, outright snooze-fest.

f*ck SFU, we need more graveyard classics. how about some van halen covers

Chris Barnes cured me of feline aids, he was the one who gave it to me though.