The Ghost Inside Dear Youth 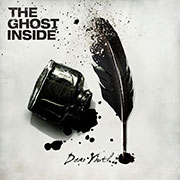 01. Avalanche 02. Move Me 03. Out Of Control 04. With The Wolves 05. Mercy 06. Phoenix Flame 07. Dear Youth (Day 52) 08. Wide Eyed 09. My Endnote 10. The Other Half 11. Blank Pages
2014 Epitaph Records
Our score 7
by Luke Henderson
12/14/2014
With the exponential growth of metalcore in the mid-2000s, many people initially lumped The Ghost Inside in with the wave of fad-driven bands who haphazardly stitched melodic choruses to simplistic breakdowns together in an effort to capitalize on a growing trend. While their debut offering, Fury and the Fallen Ones, was far from perfect, this band has steadily distanced themselves from their more mediocre compatriots by consistently refining and developing their song-writing over the last seven years. As a result of the band's development and refinement, Dear Youth is rightfully the group's most anticipated release to date. The record wastes no time getting to the point, with vocalist Jonathan Vigil's hoarse scream leading the charge on the aptly named opener, "Avalanche." This track's galloping riffs, frantic pacing, and sporadic gang vocals act as an impressive statement piece for this record's potential. "Move Me" and "Out of Control" continue the metallic barrage while blending certain melodic elements that weren't necessarily present on the first track, but still seem very at home on this album and will not come as a surprise to anyone familiar with the group's back catalogue. As the album progresses, tracks like "With the Wolves" and the string-laden "Phoenix Flame" show off the band's ability to write hook-driven choruses and breakdowns that have long been metalcore's most enduring calling card. While songs like these, or later tracks like "Blank Pages," aren't the most inventive or memorable tracks on the album, they help the album progress in a logical fashion and showcase the sonic diversity The Ghost Inside is capable of. The heart of this album unquestionably lies in standout tracks like "Mercy" and "Dear Youth (Day 52)." The former relentlessly delivers stylish hardcore riffs and hard-hitting breakdowns laid beneath a consistent lyrical barrage. The latter song serves as the emotional core of this record, blending a cautionary message with guttural screams, a charging rhythm, and a chorus that only becomes more memorable with each listen. For even the most casual listeners of metalcore and/or melodic hardcore, these tracks help demonstrate a versatility and earnestness that makes it easy to understand how The Ghost Inside stands out amongst their counterparts. Following the high point of the title track, the album temporarily nose-dives with "Wide Eyed," which begins as what seems to be the most straight forward melodic hardcore song on the record, but gets lost somewhere along the way, with an oddly placed guest vocal spot by Letlive's Jason Butler and a breakdown that seems out of place and tacked on at the last second. From this point the album finishes with solid songs like "My Endnote" and "The Other Half," but never fully regains the momentum attained at its midpoint. Bottom Line: Without rewriting the rule book, Dear Youth is a solid outing, proving that The Ghost Inside has been able to mature and develop both musically and lyrically without becoming tedious or derivative. Additional focus on style and direction would do wonders for these metalcore mainstays.

this album is better than their previous, but falls short of Returners. the mixing is somewhat awkward. the riffs are a little recycled, and some are plainly derivative of other established bands. While I like the Ghost Inside, I still feel that they are settling for mediocrity with each release. Enjoy them again on warped and keep cashing in those easy paychecks. This is the new green day

The bass sounds terrible. I mean it's well played but the tone is all wrong and tends to muffle out the guitars. It's no Returners but much better than the last one!

I think this is one of those bands that if they venture away from their usual sound at all they'll be chastised for it and if they stick to their same usual sound, they'll be called repetitive. It's a no win situation, still one of the most consistent bands out there, the musics good no matter what the reviews say.

these guys need to practice their Dillinger Escape Plan and GTFO

This album sounds awful. The songs are decent, but the production is so muddy.

This album was a lot better than Get What You Give, so I'm happy about that. It's obviously not better than Returners or FATFO, but it wasn't really expected to be. My only problem with the album is the song Phoenix Flame which just seemed like a poor attempt to re-create their song White Light. Other than that (and the generally crappy production) I really like how TGI has progressed.

Do yourselves a favor and cross reference TGI song With The Wolves with Thrice's Silhouette. Both opening riffs are identical. I like TGI a lot, but those dudes are getting very sloppy in the writing department. Stay hungry and step it up, guys.

Joke of a band

Band is just getting too cheesy for me.

Dude that mentioned Thrice's Silhouette was dead on. That is the first thing I heard when I listened to that track.

I personally think this is their worst album. I liked Get What You Give quite a bit. I think this album is more boring and has more cheesy and cliche parts. And the production is the worst they've had since FATFO. There are some high points on the album, but I probably won't listen to this really at all because it sounds so bad production-wise.

50/50 on it. Metalcore is a stupid f*cking "genre"... So TGI and some shit band like memphis may fire are lumped into the same genre? That's ridiculous.

50/50 on it. Metalcore is a stupid f*cking "genre"... So TGI and some shit band like memphis may fire are lumped into the same genre? That's ridiculous. just like mercedes s class and a kia Cadenza are both sedans. its called classification dipshit

I'm glad others noticed that the production on this album was subpar. I really couldn't get over it enough to enjoy the songs.

The Ghost Inside Album Reviews