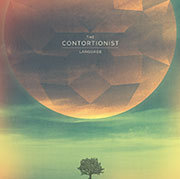 01. The Source 02. Language I: Intuition 03. Language II: Conspire 04. Integration 05. Thrive 06. Primordial Sound 07. Arise 08. Ebb & Flow 09. The Parable
2014 MNRK Music Group, Good Fight Music
Our score 8
by Alex
9/26/2014
Let me first confess that I've not previously spent time with any albums from Indiana progressive metal band The Contortionist. I'm obviously ill-equipped to quantify the transformations they've made since their 2010 debut, Exoplanet. What little I did know about The Contortionist led me to believe that this would be some sort of half-baked djent excursion, not exactly a thrilling notion to this writer. Thankfully, I was sorely mistaken. Language kicks off with "The Source," a brief and mellow affair featuring unremarkable guitar picking, layered keyboards, and some pleasant vocal runs from singer Michael Lessard. Not a particularly rousing start, though its subtle appeal warrants the song a reprieve from the virtual rubbish heap universally reserved for worthless intro tracks. Much like this album, it grows on you. The first portion of the next song, "Language I: Intuition," strongly resembles something from the final two albums of defunct band, Codeseven (not a bad thing). The guitars then begin to take over and The Contortionist seems to find their identity -- a well-balanced cocktail of skillful songwriting, diverse but focused vocals, admirable musicianship, progressive metal that lurks menacingly but rarely steps to the forefront, and the kind of moody ambiance that only keyboards can produce. Of course with their vast array of musical weaponry, it's difficult for The Contortionist to perform for long without sometimes sounding like a few bands you know well. "Language I: Intuition" may remind some of Cynic, while the rock parts of "Language II: Conspire," and indeed much of the album, sound very reminiciscent of Coheed and Cambria. Additionally, its often mellifluous blend of prog rock and technical metal is clearly inspired by Between The Buried And Me, among others. These moments are fleeting, however, and never rise to the level of blatant imitation. Moreover, The Contortionist inject enough of their own personality into the LP to render cries of forgery moot. Besides, it's the quality songs that will inevitably motivate listeners to return to Language, not the band's ability to mimic BTBAM or anyone else. The frantic bellows of vocalist Lessard that end "Language I: Intuition" give way to "Integration," an energetic combination of prog guitar riffs, sweeping melodies, and rhythmically complex metal. Notably, Language really hits its stride halfway through this song, when Lessard's haunting vocal melodies begin their reign. Strong, yet never overpowering and often deftly understated, his singing is bound to echo around your head hours after the music stops. Knowingly placed at the album's midway point, "Thrive" is its crowning achievement, a captivating journey featuring smooth, yet memorable vocals interspersed with progressive guitar and double bass fireworks. Halfway through the song lies a brief respite, a moving section featuring keyboard pads and thumping bass. Aural magic, indeed. Follow-up "Primordial Sound" is another quality composition. After channeling Dashboard Confessional crooner Chris Carrabba for 30 seconds or so, Lessard is supplanted by some mellow prog orchestration before returning to lend standout vocals to the rest of this spacey rock affair. After several bars of melancholy rock, the guitars take center stage 30 seconds into "Arise" via the most BTBAM-esque riff on the entire record. The vocals reappear shortly thereafter and the entire ensemble teams up to deliver a few minutes of jagged metal and, ultimately, enduring melodic rock while the bass guitar pounds away underneath. Since I've already mentioned Between The Buried And Me a few times, it's worth noting that Language was produced by frequent BTBAM cohort, Jamie King. While some will inevitably deride The Contortionist for selecting King, of all people, I applaud them for choosing the right man for the job. The production on here is fantastic and mix is near perfect. Criticism be damned. "Ebb & Flow" further exemplies The Contortionist's willingness to genre bend. Sometimes these musicians stomp out odd signature grooves with harsh vocals; other times they lay down thick slabs of melodic rock with lush vocals. And yet other fragments of music are sparsely orchestrated mood pieces (e.g. the Jupiter era Cave In tom rolls and guitar chords found midway through "Ebb & Flow"). It's impossible to pigeonhole The Contortionist and I'm sure they wouldn't want it any other way. Language closes with "The Parable," a moody piece that gains urgency as it proceeds, all bookended by sonic landscapes. Eventually, we hear the voice of British philosopher Alan Watts reciting a small portion of his Nature of Consciousness lecture over the strains of synthesizer chords; an inexplicably stirring end to a sterling album. Bottom Line: Capable songwriting, compelling lead vocals, and impressive musicianship unite with memorable results on The Contortionist's latest album, Language.

Great review bro. I'll say that cause I'm not a gross terror fan

Absouletly love this album so much that I could marry it! Their best yet and tied with the new Opeth for my favorite album of the year.

BTBAM are pissed at the rave reviews and 9/10 scores

What a waste of talent. Album nearly put me to sleep. f*ck this shit.

This album blows, drums were good and that's all about it. I sure hope this vocalist practices before going on tour. I remember having to sit through this shit before BTBAM and god was I bored by his shaky weak vocals and the band had to restart a song. So what does that say? Back-track live shows coming soon.

you've got to be f*cking kidding me you anonymous weirdo....BTBAM is miles and miles in front of this band. literally nobody can touch BTBAM when it comes to songwriting and originality. No band is better than BTBAM, besides Primus

they were quite boring on the periphery headliner tour

who ever says this is boring, needs to go back to their endthisday, and too pure to die CDs, because no one gives a f*ck what you think, you shallow, cesspool dwelling scum.

Sorry, but i disagree with the critics....language was the best album of 2014.....the band is ahead of their time and their skills are on another level then some of these other acts....