Mortals Cursed To See The Future 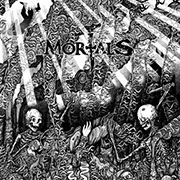 1. View From a Tower 2. Epochryphal Gloom 3. The Summoning 4. Devilspell 5. Series of Decay 6. Anchored in Time
2014 Relapse Records
Our score 8
by Daniel Marsicano
7/27/2014
Cursed To See The Future is not Mortals' first album, but it might as well be. They have a past that goes beyond the creation of this album, though it's not reflective of their current state. It's not like we have to ignore anything the band have done previously, but considering their debut was limited to a few hundred copies, the best place to begin is 2012's Death Ritual EP. This is the point where the NYC group's expressive fusion of doom, sludge, and black metal put its mark on the underground scene. The two tracks lead us nicely to this album, where Mortals exude absolute confidence in their extreme sound. Mortals vacates the discomforting space between morbid heaviness and uptempo refuge. At any moment, a timid riff can erupt into an anger-filled lashing. The way the band makes fleeting instances of restraint seem ominous, like the guitar-only break two-thirds of the way through "The Summoning," gives the entire album an unshakable feeling of dread. It's impressive that the trio is able to gallop between multiple tempos with no awkward transitions, considering over half of the six songs go at least eight minutes each. With durations like that, there isn't much instant gratification from the album. That doesn't mean it's a chore to endure, but the listener has invest something to fully engage with the material. There's not much in the way of a stop gap between the noise, though an occasional guitar melody pokes out. The closing track "Anchored in Time" is one of the few instances when there isn't a driving pace to the music, as its level headed approach favors nimble strength over a knockout jab. The music comes out through visceral, yet distinguishable, production that gives all the members equal footing. The bitter vocals are not buried by the dirt-drenched bass lines or vivid rhythm work. Every member gets their shot to shine, as bassist/vocalist Lesley Wolf does with her instrument in the opening minute of "Epochryphal Gloom." However, some of the top-notch tunes come from the three members working as a collective machine, like the jaw-dropping hostility on "View from a Tower" and early sections of "Series of Decay." As a trio, they don't use the studio to boost their instrumentation or add unnecessary layers. Cursed To See The Future sounds like it was recorded by just the three of them. That should help out with their live show, where audience members won't expect anything more than what is presented on the album. Though the studio captures a raging bunch of musicians at their most primal, these songs in a live setting will be ruthless in a whole other way. Death Ritual was such a great EP that it's a relief Mortals were able to follow that up with a winner in Cursed To See The Future. Its taut display of resentment and gloom through blackened doom and angular sludge is thrilling to behold. A few listens may be necessary to truly grasp the scope of these songs, but the effort provides a glimpse into some of the bleakest music this reviewer has experienced in quite a while. This is not bleak in a "Woe is me, somebody kill me" way, but a "There's no escape. All hope is lost" manner that is a stellar place for Mortals to reside in. Bottom Line: Blending doom, sludge, and black metal, Mortals have put together what will undoubtedly be one of the sleeper hits of the year with Cursed To See The Future.

"Considering their debut was limited to a few hundred copies, the best place to begin is 2012's Death Ritual EP" Or just download the f*cking thing like any normal human being.