Goatwhore Constricting Rage of the Merciless 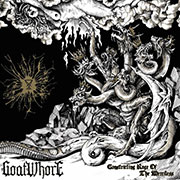 01. Poisonous Existence In Reawakening 02. Unraveling Paradise 03. Baring Teeth For Revolt 04. Reanimated Sacrifice 05. Heaven’s Crumbling Walls Of Pity 06. Cold Earth Consumed In Dying Flesh 07. FBS 08. Nocturnal Conjuration Of The Accursed 09. Schadenfreude 10. Externalize This Hidden Savagery
2014 Metal Blade Records
Our score 7
by Daniel Marsicano
7/8/2014
With their fertile pairing of deadly death/thrash and bitter black metal, Goatwhore have risen through the ranks to become a prominent metal band. It's tough to estimate where the shift towards prominence came from, but some may pinpoint 2009's Carving Out the Eyes of God as the first sign. Since then, the tours became more prolific and the press dutifully carried their message to fresh-faced listeners. It was clear with their next album, Blood for the Master, that the foursome from New Orleans, Louisiana landed sonically where they wanted to stay on Carving Out the Eyes of God. Not to say it was a bad album, but there wasn't much deviation apart from a few slower tempos and an acoustic lead or two. The most interesting thing about Constricting Rage of the Merciless, the sixth full-length record from the group, is that Goatwhore tracked most of the instruments to two-inch tape, which means it isn't a Pro-Tool'ed catastrophe. The band has never worked with production as organic or as welcoming, and whether this was a factor or not, it's a blessing on the ears not to have to hear overwhelming drums or guitars that feel like they were processed a million times over. Though the recording particulars may be something new, the songwriting isn't much of a departure. You got your straight-ahead, jagged cuts, a few tracks that work in some flashy dynamics, and a running time that doesn't get close to the 40-minute mark. At this point in their career, these guys don't screw around; witness the triumphant opener "Poisonous Existence in Reawakening." The song is comfort food for the ears of long time fans; not on the level of brilliance of a "Apocalyptic Havoc," but familiar enough to dash away any concerns of the band diluting their sound too much. The band's furious nature is not curbed as the album stretches on, but appears to get fired up. The seething tempos of "Unraveling Paradise" are only topped by the bruising finish to the album in "Externalize This Hidden Savagery." These two tracks exemplify how uncompromising Goatwhore can be, though the contemptuous streak of "FBS" is not far behind. No matter which song is discussed, there's always at least a few seconds where any sign of structure flies against the cement wall of dissonance. It could have been simple for the band to plow through ten tracks that aim for neck slamming over substance, and while there is plenty to head bang over, there are also a couple of tracks that take a bit to sink into. "Heaven's Crumbling Walls of Pity" introduces slight melody with the guitars in the intro, though it literally lasts about ten seconds before the maniacal pace quickens. The biggest digression is the sludgy underbelly of "Cold Earth Consumed in Dying Flesh," which switches speed for bone-snapping heaviness, all with admirable results. Really, if the album is missing anything, it's a notable omission of further exploration into the more subtle side of the band. "Cold Earth Consumed in Dying Flesh" is the lone song where the musicians truly decide to deviate from the extreme nuances that dominate ninety percent of the album. When track after track has a whiplash effect, having one that builds up with a sinister weight makes a big difference. It also highlights just how sharp they can be when they don't focus so much on getting to their mark in record time. If you've heard any of Goatwhore's records before, Constricting Rage of the Merciless won't be a significant revelation. Their songs rage and snarl at the listener with vile intent, and the fact that there isn't much downtime makes the album all the more ruthless. With one of the band's longest songs to date, as well as an aggressive streak that doesn't have a chance to rest, this album further establishes the fact that Goatwhore have yet to hit a major creative snag. Bottom Line: For those looking for music that'll make for sore necks and destructive tendencies, Constricting Rage of the Merciless will provide satisfaction.

Umm...errmmm...Goatwhore should be on this? AmiRite? I'll go home now...

this band has always been garbage