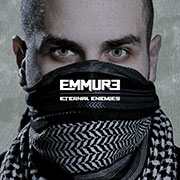 01. untitled 02. Nemesis 03. N.I.A. (News in Arizona) 04. The Hang Up 05. A Gift A Curse 06. E 07. Like LaMotta 08. Free Publicity 09. Most Hated 10. Grave Markings 11. Hitomi's Shinobi 12. Rat King 13. Girls Don't Like Boys, Girls like 40's and Blunts 14. New Age Rambler 15. We Were Just Kids
2014 Victory Records
Our score 4
by Alex
4/14/2014
More than a decade into their careers, Emmure has achieved a respectable level of success. They headline tours, they sell thousands of albums, and their name is widely known among younger metal fans. Naturally, with success comes criticism, but Emmure attracts significantly more derision than most. The band primarily takes heat for two things: simplistic songwriting and the me-against-the-world antics of frontman Frankie Palmeri. If either component of the Emmure machine draws your ire, Eternal Enemies will do nothing to alleviate your contempt. They've not evolved, and they're hoping that Emmure fans haven't either. Eternal Enemies gets off to a rough start with an untitled track. The song was once called "Bring A Gun To School" before controversy apparently prompted the band (or Victory Records) to ditch the title. Frankly, Emmure should have scrapped the entire affair, because this is barely a song. It's an uninspired flogging of a single guitar string with lyrics that could have been written by an inebriated twelve year-old. I'll give Palmeri the benefit of the doubt and suggest that these lyrics were written solely to irritate writers. Mission accomplished. Next. "Nemesis" was the first song released from the album, and it's an Emmure song through and through. In fact, its beginning sounds a bit too much like Emmure fan favorite, "Solar Flare Homicide." No matter, repetition is not exactly a foreign object amidst the Emmure canon. Like much about the band, "Nemesis" is utterly confounding. It's effective, albeit simplistic, deathcore that hits all the right notes (or lack thereof) until Palmeri's embarrassing spoken word vocal part materializes. The blight is partially erased by the song's ending, which nicely combines electronics with an ultra-heavy groove. Emmure is often tagged as nu-deathcore and if anybody needs evidence to support the assertion, look no farther than track four, "The Hang Up." With a thumping bass and squealing guitar riff, it's Korn featuring guest vocals from Emmure frontman Frankie Palmeri. This style of metal must surely appeal to someone, but not I. Chalk another one up in the embarrassment column. Thankfully, when "A Gift A Curse" kicks in following a hearty drumbeat, we get some actual melody. This is not a great song, but it is semi-enjoyable and has more depth than your typical Emmure effort. Relatively speaking, the song is pleasantly ambitious. And right on cue, whatever capital the band earned via "A Gift A Curse" is pissed away on "E," truly an amusing title given Emmure's penchant for eschewing fretboard exploration (granted, Emmure doesn't use standard tuning, so perhaps "B" would be a better moniker). Gang chants of "get up" lead into a brief pause which finds Palmeri directing listeners to "bounce." Ugh. Uninventive deathcore and intermittent hip-hop scratching ensue. And so it goes. For every slab of decent deathcore, Emmure has a nu metal parlor trick or a stanza of junior high level lyrics. On occasion Emmure does attempt something new, whether it's borrowing from the Deftones on "Most Hated" or channeling A Day To Remember on "We Were Just Kids." While the band gets points for trying, these experiments feel half-hearted, if not ill-conceived. I haven't had the pleasure of experiencing Emmure live, but I have little doubt that most of these songs work extremely well in that setting, where any offensive subtleties aren't discernible and the band's mosh inducing abilities reign supreme. But on tape, Emmure is exposed too often. What these guys truly need is an executive producer to rid their music of resident tripe. A new lyrical dimension is also desperately needed (search the Internet for the lyrics to "Most Hated"). They must veer away from Palmeri's rebel shtick, which looms oppressively throughout Eternal Enemies. Please don't misunderstand, Frankie Palmeri is a good frontman. His raspy barks, hollowed throat bellows, and requisite hostility serve Emmure well, but the animus grows more tired with each successive album. Bottom Line: Emmure can still pack a punch and Eternal Enemies should satisfy the metal needs of unimaginative adolescents everywhere, more than enough to render this a marketplace success. However, their increasingly dated formula makes the criticism they garner seem more deserved than ever. As their fanbase grows older, Emmure should consider mounting a sincere effort to follow suit, or risk fading into the abyss as champions of three-fret deathcore.

what, no comment on "Free Publicity"? the one song on the album about Lambgoat?

E is in G YOU BIGGGGOTTT!!!

The only thing worse than this album is this reviewers capability to make any sense of what he is talking about.

Frankie is shocked at this essay, posing as a review

Post a picture of a turd as the review.

who cares if its technical or not thats not their thing, if you want technical go listen to some other shit! second if you dont like emmure then dont f*cking listen to it, no one forces you to... i like the whole FTW attitude! im 28 years old, i listen to everything from metal to deathcore. as long as i can bang my head and feel the groove, its music plain and simple. all the haters out there are just depressed and/or jealous their shitty band hasnt gone any where.

Emmure is not deathcore they are nu metal with breakdowns...deathcore is like despised icon,carnifex,as blood runs black ect. Which actually takes musical tallent to play unlike emmure I seen them live in the year 2008 In Huntington WV they played with Tony danza tape dance extravaganza which they were 10 million times better than emmure live....emmure I even like this Shit band when I went and I thought they were bad live if tells u anything

Emmure should be on this... wait a minute.

Why bother reviewing this and giving them unneeded publicity?

Emmure should be on this

In my opinion ok my OPINION lol I really enjoyed this album a lot. I think a lot of others did as well but are jumping on the band wagon because people are afraid to say what they really like and don't like due to fear of others.

Frankie is shocked by this review.

Actually, they're pretty unique as far as music in the genre is. My friend's band did a cover on one of their songs (it was Don't Be One, from 2009's Felony). It isn't so simple. They have changed, rather than stayed the same. I feel this critique is somewhat plausible, but otherwise a juvenile attempt to discredit the band for whatever reason, maybe for their (somewhat) offensive style and lyrics (to an extent), or something. Additionally, Emmure isn't old- almost a decade and going.

Easily the single worst band of all time.

What the f*ck is going on here? This whole thing stinks...from top to bottom. It just stinks.

Solid recording for Emmure! Keep up the great work! Just wish they would talk about God more. :( Oh, well. See you on tour, guys!

SHITTIEST ALBUM OF ALL f*ckING TIME KILL YOURSELF

While I think Frankie is a tool and almost ruins the band the musicianship is top notch for the genre and A LOT of bands attempt to rip the musical side of things off... and well it falls flat. There is no denying how big of influence they have been on all these newer bands whether they admit it or not.

I agree with the review. I can always pick at songs Emmure writes and find something I like, or that sounds good loud. However, like said in the review, Ive gone from young and not caring to 25 wishing this was a more mature album. That said Ive only listened to Eternal Enemies completely high and I didn't mind half of it. The song E did make me LOL though. My bottom line, just smoke a lot of weed and its not terrible

This album reminded me of Limp Bizkit, if they had balls. I thought I heard him calling someone out like a rapper too. SMH, kidz these days.

I think I would've liked this album when I was 11. And I'm all about bands sticking to their sound and standing out and shit, but good god...just no

Emmure - Speaker of the Dead Emmure - The Respect Issue