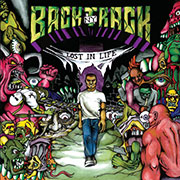 01. Their Rules 02. Wash Away 03. Lost In life 04. Under Your Spell 05. Nailed To The Tracks 06. Tortured 07. Rot In Your Race 08. Right This Wrong 09. Play Safe 10. Still Searching 11. Guilty Conscience 12. The Way It Is
2014 Bridge Nine Records
Our score 8
by Luke Henderson
2/20/2014
Hardcore doesn't always lend itself to innovation or branching out into unfamiliar territory. While some bands end up becoming stagnant and monotonous in the face of self-imposed stylistic limitations, other groups are able to offer a fresh and exciting reinterpretation of this established sound. These latter bands are best exemplified by Long Island's Backtrack. Making hardcore purists stand up and take notice with their 2011 debut LP Darker Half, many had high expectations for their latest offering of aggressive, New York-style hardcore. Fortunately, Lost in Life delivers punishing, memorable songs at almost every turn. Backtrack wastes no time by starting off the record with "Their Rules," a mid-tempo track with memorable riffs and a gang vocal-laden chorus that serves as an impressive opener and a definite album highlight. "Wash Away" and "Lost in Life" continue the aural assault with galloping drums, energetic riffs, and unrelentingly belligerent vocals that never seem tedious or tiresome despite not being overly diverse. At this point it also becomes readily apparent that the band made an excellent choice having Nick Jett, best known as the drummer of Terror, produce this album. Overproduction is always a concern for bands in a genre largely known for its raw recording style, but Jett is able to create a clear, crunchy, fresh sound that really highlights the group's song writing and performance. The album continues the remorseless hardcore barrage with "Under Your Spell," an anthemic track that blends driving riffs and lyrics that deal with social alienation through vocalist James Vitalo's menacingly delivered screams. Following this, "Nailed to the Tracks" seems to be a somewhat forgettable song until its breakdown and outro hit harder than nearly anything else on the record. "Rot in Your Race" and "Right This Wrong" help fill out the middle of this record, and although their relentless tempos and driving guitar lines shouldn't be discounted, they don't hit with the same impact as many of the earlier offerings on this album. Unlike countless hardcore bands that load the first half of their record with the strongest tracks and leave their weakest offerings to serve as filler at the tail-end of the album, Backtrack finishes as strongly as they start. "Still Searching" and "The Way It Is" deliver some of the most memorable song writing on the entire record and "Guilty Conscience" is the album's fastest track, blending thrash riffs with a hard-hitting groove into an impressive example of well-executed crossover hardcore. Bottom Line: Backtrack is helping to keep straightforward hardcore enjoyable and interesting. Lost in Life is both a logical successor to their debut LP and a demonstration of how much the band has grown as songwriters. Although not without its flaws, this record sets the bar quite high for hardcore in 2014.

f*cking gay band. fake crew gays. all these kids listened to suicide silence in 07, sucked the right dcks and now have weight behind them. f*ck this band hard. long island pssy shit. not a single one of these kids would shoot the ones with you

this album was f*cking disappointing

its an ok record, but I can't get into it. younger kids are more stoked on this than me.

rehashed bullshit written by young kids that know nothing about actual hardcore. f*ck fake crews and f*ck this band.

First comment nailed it. The indian guitarist was anemo kid his whole life before this band, playing in pop punk bands. This is faux watered down imitation horseshit.

Don't listen to what all this bullshit being spilled out in the comments about this band, this is a great record and Backtrack is a good addition to hardcore music.

Darker Half part 2. Zero progression what so ever

Does it stand out like Darker Half? Maybe not, but there are some good songs on it. Seen these guys a few times and always great liver performances. If they want think they are part of a "Dog Pound Nation" (whatever that means) so be it. Good shit all around.