Indian From All Purity 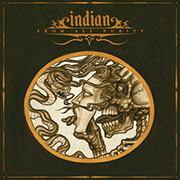 01. Rape 02. The Impetus Bleeds 03. Directional 04. Rhetoric Of No 05. Clarify 06. Disambiguation
2014 Relapse Records
Our score 7
by Daniel Marsicano
1/26/2014
Noise envelops the listener, as blaring electronics and synths correspond to a dynamic weight of sludge/doom riffs. Time stretches and contorts, seconds coming and going with slow development. Indian has spent years in these twisted soundscapes, each album a crushing blow that can't be redeemed by hours of upbeat tunes. Now, these Chicago natives are looking to take their music into even darker territory with From All Purity. A beefy production and a sinister aura in every note played keeps this release staying strong until the commanding finish. Those using From All Purity as their introduction to Indian won't have to wait long for the onslaught, as opening number "Rape" develops its dangerous energy over the duration of almost eight minutes. Much goes on during the song, and noises coming from all directions can be difficult to keep tabs on at first. The band purposefully maintains a mid-tempo pace throughout this song, as well as the majority of the album. The first minute or two of "Rhetoric of No" is the lone exception, with its chugging tempo providing a needed change-up. There is a determined effort to maintain a streamlined approach to the songwriting. The band works in limited movements with their riffs, especially with major progressions, letting each song bubble and sway towards their inevitable implosion. Raspy screams ring out in the dense background, and unless one has the lyrics in front of them, it's hard to pinpoint the exact words. The vocals become a part of the suffocating atmosphere that threatens to swallow the album whole at any moment. Indian limits the relief clean guitars or tranquil ambience could provide. Save for the subtle melody underneath "Disambiguation," there's no reprieve from the band's ruthlessness. It's a calculated move on their part, as the constant barrage becomes a gripping quality that a listener will want more of. Their ability to make such harshness digestible is commendable. For all the positives, a glaring misfire is the meandering "Clarify." The shortest track on here, it's also the most excruciating to get through. Both piercing guitar feedback and brash electronic sounds dominate most of the track, along with unintelligible screaming. Just see how long you can take it; a minute or two is bearable, but almost five minutes is too much and almost derails the entire record. Good thing that the band uses the top-notch closer "Disambiguation" to bring the proceedings back on track. Though it took Indian almost three years to follow-up Guiltless, the wait is not in vain. From All Purity is undeniably bleak, and 40 minutes is just enough to be caught up in its hostile sonic wave. There's no letting up from the band, and while there's always the risk of falling into indistinguishable chaos, the group doesn't fall victim to that circumstance. With their fifth full-length, Indian builds upon a key fact that should define their music: beauty through dissonance. Bottom Line: It's noisy, unpleasant, and vicious in its sludge/doom attack; all qualities that make From All Purity a strong release from Indian.

I see the point of "Clarify". Put this way; this album is so crushing you kinda have to have a track in between to break up the songs a bit.Could they have messed with and experimented a little more with this track? Sure but for me personally I like it and understand why it's there.