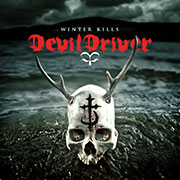 01. Oath of the Abyss 02. Ruthless 03. Desperate Times 04. Winter Kills 05. The Appetite 06. Gutted 07. Curses and Epitaphs 08. Carings Overkill 09. Haunting Refrain 10. Tripping Over Tombstones 11. Sail
2013 Napalm Records
Our score 7
by Daniel Marsicano
9/17/2013
Devildriver has had to scrap and force their way to success, having to avoid the association vocalist Dez Fafara had to his former band Coal Chamber. While that band has been relaunched, Fafara's main focus seems to be with Devildriver. That's a smart move, considering how far they've come since the nu-metal leanings of their 2003 self-titled album. They started to step away from that with their second release, The Fury of Our Maker's Hand, and each album has seen a move towards a groove-accented melodic death metal sound. Winter Kills will be comforting for those who have been attuned to the last few Devildriver albums. Other than a new bassist at the helm, this is the same group of guys that have been going strong for almost a decade together. They've taken their groove metal and thrown in bits of melodic death metal in there, though it's not enough to overshadow the crushing groove they get from guitarists Mike Spreitzer and Jeff Kendrick. The two of them have made dramatic improvements with their playing over the years, adding in well-timed solos and crafty leads over the main riffs. That continues with Winter Kills, though the solo quotient has declined from past albums. Still, when they come around, it injects some excitement to the song. Fafara is Fafara, which means that he puts on a tough-guy routine that gets overwrought at times. That's most apparent with the profanity-laced "Ruthless," which has enough F-bombs to make Fred Durst jealous. His screaming vocals are what they are; either you totally dig them or can't get into them. Thankfully, the music that surrounds him is not as uneven. These guys know how to hone in on the gritty aspects of groove metal, without being forced to tame their sound for a commercial audience. It takes a couple of songs for Winter Kills to start hitting its stride, but once the intense, uptempo "Desperate Times" pops up, the album gets moving. The band makes sure to include a few speedier moments, though they are not particularly frequent. The songs that get to five minutes and over ("Curses and Epitaphs," "Hunting Refrain") play around with melodic guitars, though it's usually reserved for a brief introduction that's dropped quickly for the groove to slam its way in. One of the biggest surprises on Beast was the band's effective cover of 16 Horsepower's "Black Soul Choir." Hearing these guys take on a country tune was a fresh twist on their sound, and they try their hand at it again with their cover of Awolnation's "Sail." While the original is an indie/electronic rock tune, Devildriver gives it a metal makeover, while sticking to the song's indie traits. Female vocals accentuate Fafara's harsh tone, and the band gives the song enough of a change to make it their own. Winter Kills continues the "album every two years" pace that Devildriver has kept to since their first album. That systematic approach has helped the band shape their recognizable sound, though little has changed in the past few years. Other than the surprisingly versatile "Sail" cover, Winter Kills is what someone who has heard a Devildriver album before would expect from the band. The trade-off for a lack of innovation is confident songwriting, which is still a valuable quality to possess. Bottom Line: Very little has changed for Devildriver, but they still deliver rough, anthemic groove metal that skirts into melodic death metal territory.

Band f*cking sucks, always has always will. Reviewer is a gaygo.t, no way is this a 7

gaygot? god u idiots are ridiculous

is this something lambgoat should really be reviewing?