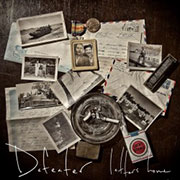 01. Bastards 02. No Shame 03. Hopeless Again 04. Blood in My Eyes 05. No Relief 06. No Faith 07. Dead Set 08. No Saviour 09. Rabbit Foot 10. Bled Out
2013 Bridge Nine Records
Our score 6
by Luke Henderson
8/12/2013
Not many hardcore bands are able to boast that they have developed a dedicated following by churning out multiple albums situated in a fictional post-WWII world that exams the lives and deaths of a particularly down-trodden, abusive, and violent family. Although the band doesn't abandon standard hardcore lyrical tropes like overcoming adversity, familial unity and strife, or persevering through difficult times, Defeater was always able to put a fresh spin on these topics by rooting them deeply in a by-gone and largely romanticized era. Furthermore, this is not a band that could ever be accused of shying away from complexity, favoring a unique blend of punk-influenced hardcore, with post-hardcore sentiments, acoustic guitar interludes, and interwoven storylines of a family struggling with drug/alcohol addiction, bloodshed, cruelty, and ultimately fratricide and patricide, spread out across the band's entire discography. One thing that remained to be seen was whether this intricate set-up would allow the band to keep breaking new ground on their third full-length, Letters Home, or whether crafting such an elaborate world would become too much of a hindrance and outweigh the obvious benefits of such a project. Like the moral ambiguity of the characters that vocalist Derek Archambault has created, this record is largely an intertwining of notable talent and insight coupled with prominent missteps and missed opportunities. This duality is perfectly exemplified in the album's first two tracks. "Bastards" opens the record with an extremely well-crafted, mid-tempo anthem that is both sonically diverse and instantly memorable. Unfortunately, this high point is followed by "No Shame," which blends banal post-hardcore dissonance and nu-metal chugging to a disappointing end. Tracks like "Hopeless Again" and "Blood in my Eyes" include some of the most impressive and compelling song writing this band has produced thus far. Raw, desperate vocals mixed with a series of no-holds-barred, punishing riffs help create the desperate and frantic atmosphere that perfectly complements the group's ongoing tale of misery and despair. "No Relief" is another notable track, as the already strong song is further bolstered by the guest appearance of Blacklisted's George Hirsch. Unfortunately, this impressive showing isn't without its low points. While not quite terrible, "No Faith" and "Dead Set" seem uninspired and derivative of what this band usually has to offer. The riffs fall flat, the lyrical content seems tired and unimaginative, and the next track, "No Saviour," continues as a slightly improved, but ultimately dull post-hardcore endeavor. Just when it seems that all is lost, the album finishes with two strong and notable tracks. "Rabbit Foot" reclaims the vitality of this record by combining naked aggression and melodic instrumentation that further highlights the capabilities of this band. The album's final highlight is the closing song, "Bled Out." Clocking in at over 6 ½ minutes, it is a refreshing, impressive, and well-crafted track that avoids becoming lost or meandering by balancing vocal rage with inventive and stylistically-varied riffs. Bottom Line: Letters Home has some of the best-written and most impressive songs that Defeater has ever written. Unfortunately, these gems are surrounded by enough directionless and underwhelming songs that the overall listening experience suffers significantly.

Teen girls everywhere are upset with this review.

hitler is so pissed he shot himself

this band is such a joke.

More people need to compare MLIW and Defeater. It's a totally original and valid comparison.

The troops are stoked.

Comparisons between Modern Life Is War and Defeater are unfair.....for Defeater.

Defeater is gay. Nobody cares about your grandparents family drama.

All c*nts living in bastuffts.

"...and ultimately fratricide..." Wow, spoiler alert! Thanks a lot, Lambgoat!

Another album I got sick of really quickly.

You either love defeater, or you don't relate to it--same goes with the whole genre of melodic post-hardcore. If you're a numetal douche, you're not going to like it. That doesn't mean it's directionless, it means you're directionless pretty much. Greatest album of 2013 by a long shot. 9.5/10 [although I will admit that the last track drags a bit, as do a couple at the end of Empty Days, Sleepless Nights.]