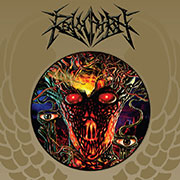 01. The Hive 02. Scattering the Flock 03. Arch Fiend 04. Numbing Agents 05. Fracked 06. The Gift You Gave 07. Invidious 08. Spastic 09. Entombed By Wealth 10. A Visitation
2013 Relapse Records
Our score 6
by Daniel Marsicano
8/5/2013
Revocation's sophomore album Existence is Futile was a far superior version of its predecessor, Empire of the Obscene. Nicely blending technical death metal with thrash and a dash of melody, the album was bound to be successful. Of course having a skilled guitarist like David Davidson in the band is key, as his flashy solos have always been one of the primary reasons to give Revocation a listen. Chaos of Forms introduced a second guitarist to make the trio a foursome, and that was a positive move for their sound. They were on an upward path of momentum, as their profile increased with each release. Going the self-titled route with their fourth record, Revocation doesn't deviate from their core style. However, in this case, the songwriting is not as sharp. The riffs, which have been overshadowed by the lead guitar work on previous albums, can get stale. Even the leads are held back on a few songs by minutes of doodling around with no payoff. There are glimpses, as slight as they are, of their past successes, and those instances do provide a great deal of hope. Revocation avoids a straight-and-narrow path, peaking and falling back to reality at an almost-constant speed. The track listing fuels this uneven pacing; songs that go on for almost six minutes next to each other early on, or a burst of energy sapped by a laborious cut in the middle of the album. Revocation never finds the perfect spot as far as flow goes, and that makes for a hassle heaped onto the listener. The sub-par moments are a shame because of the high quality of a group of tracks. "The Hive" is a competent opener, a venom-laced howler that sets the right tone for the album. "Fracked" is one of the most premier songs the band has written to date. A catchy main riff will elicit head-banging, all while both guitarists and the bassist get in on the soloing. For at least those four minutes, the band is their old unstoppable selves. A banjo is dusted off for "Invidious," which works better than expected. It's not an overbearing influence on the song, and its twangy notes give the song a suitable bounce. These tracks are placed alongside drawn-out affairs like "Scattering the Flock" and "A Visitation." The former has a great opening, a brutal and direct death metal front that unfortunately can't keep the excitement going for long. "Arch Fiend" throws in an acoustic break near its end, but that isn't enough to get through a mid-tempo slog. "Spastic" is one of their lesser instrumentals that can't compare to "Across Forests and Fjords" or even "Enter the Hall." All of this inconsistency is strange considering that just last year, they released a great EP Teratogenesis. That was the first release with the new line-up, which brought in bassist Brett Bamberger. He, along with the rest of the guys in the band, continue to shine on this eponymous release. There can't be any arguments from the musical side about their abilities. Clearly, these are some of the best musicians that contemporary metal has to offer. However, how can it be that an album can have a song the caliber of "Fracked" followed by a timid and average cut in "The Gift You Gave"? As someone with a fondness for the past albums from Revocation, it's deflating to deal with an album featuring an equal number of stunners and disappointments. Compared to everything else the band has put out, most of the ten cuts on this self-titled album don't reach the same level of quality. "The Hive," "Fracked," and "Invidious" are mandatory listens, while the rest should get a cautious play-through. Bottom Line: This self-titled effort is a disappointing step back for Revocation, considering the band has been on such a roll since 2009's Existence is Futile.

This seems like it will be boring. No listen

Take a shot every time you read an album review featuring the word "eponymous."

Review of this review coming soon.

Bands been on a role since before existence. f*cking retard.

Not their best but it's better than most shit metal.

The Gift you Gave is an awesome song, it doesn't deserve this hate

The Gift You Gave is a better song than Fracked.

This album is great. Takes getting used to considering the new tuning they are playing in and the overall change in sound. Still, the riffs are great, the solos are nice, and the songs become catchy. People are hating because this album is different but it is far from bad. 8/10.