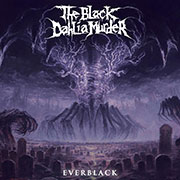 01. In Hell Is Where She Waits For Me 02. Goat Of Departure 03. Into The Everblack 04. Raped In Hatred By Vines Of Thorn 05. Phantom Limb Masturbation 06. Control 07. Blood Mine 08. Every Rope A Noose 09. Their Beloved Absentee 10. Map Of Scars
2013 Metal Blade Records
Our score 8
by Daniel Marsicano
7/30/2013
The Black Dahlia Murder has been unstoppable, dating back to 2007's Nocturnal. That was the record where they found their musical bearings, and though line-up changes have taken place several times, their music has gotten better as the years wear on. 2011's Ritual was a fantastic death metal album, one that took their sound and cast a wider creative net. It wasn't a major departure, but the slight dynamic shifts were welcomed. Their habit of releasing a new album every two years continues with the uproarious Everblack. There isn't much experimentation to be heard on Everblack, as the band reverts to an unhinged stampede of noise. They've always had a "melodic" aspect to their sound, usually in the guitar work, and though that's still a factor, it's been scaled back a bit. The riffs have a deadlier crawl to them, and Trevor Strnad's screams are at a peak intensity. He roars in a high pitch, occasionally going low with a charismatic growl. The band seems pissed off, and it's not held back on these songs. Over time, The Black Dahlia Murder has been able to extend their songwriting. Songs that were three minutes on average have moved to four or five minutes. An extra minute per song may be no big deal, but it is a sign of a band being able to flesh out riffs, work on momentum fluctuations, and expand on the lead guitar. If there's a vast jump anywhere, it would be with the solos. The band has obviously worked on the solos during the past few albums, and Everblack is the best result to date. The band comes into this album with an entirely new rhythm section, including former Despised Icon bassist Max Lavelle and ex-Abigail Williams/The Breathing Process drummer Alan Cassidy. Though losing Bart Williams and Shannon Lucas was disappointing, the two new members fit into the band with no negative consequences. Cassidy hammers the hell out of his drums, and each song is a test of how much faster he can go. The two get some room to jam out on "Into the Everblack" and "Every Rope a Noose." Except for some symphonic elements on "Map of Scars" and a way-too-brief acoustic outro used on "Every Rope a Noose," Everblack is as bull-headed as modern death metal can get. "Goat of Departure" is a brutal cut that follows up an ambitious opener in the excellent "In Hell is Where She Waits for Me." It's hard for any band to make a song titled "Raped in Hatred by Vines of Thorn" catchy, but The Black Dahlia Murder pulls this off. Including the gang chants certainly helped achieve this feat. Though Everblack isn't a groundbreaking album, it's another stellar record in a long line of them. Quality has not been a major issue for The Black Dahlia Murder, and Everblack keeps this tradition going. The band has found their groove as a melodic death metal act. There's always a chance that they'll get stuck in too much of a comfy spot, but if they keep handing out songs like "Into the Everblack" and "Map of Scars," they will have nothing to worry about. Bottom Line: The Black Dahlia Murder continues their string of excellent albums with the uncompromising, yet judiciously melodic, death metal effort Everblack.

loved the album, but not thrilled with the new drummer. however some say lucas was too busy with the fills, I got used to it

i'll definitely be downloading this.

Drumming on the first song was a major let down but he picks it up later in the album and seems to be able fit in for the rest of the album. Still a solid album!

Two months ago is stoked on this review. P.S. This album should've been called 'Ever the same old shit'

am I the only one let down? 'Nocturnal' and 'Deflorate' were gold, 'Ritual' was great', more than half of these songs slow down so damn much, and they're all lack-luster

took a step forward with Ritual and two steps back with this one. Some of these songs downright suck.

Miasma is still their best album imo. Nocturnal and Ritual were sick too. I think this is their weakest album so far. There's only like 3 good songs on it, everything else is weak / written poorly. Dahlia needs to stick to that dark sounding black metal shit and the slower/ sludgy songs. All the super melodic "happier" sounding stuff gets annoying to me. And Trevor if you're reading this, go back to doing more lows on every song, I feel like it's 80% highs now and that's no bueno.

I'd take this album over Deflorate any day. Nocturnal and Ritual were the two best albums these guys did. Period.

Apparently everyone forgot about Unhallowed which is by far their best album. After that it all junk.

shitty album from an awesome band. songs are repetitive. "into the everblack" is the best song on the cd and that's not saying much. trevor delivers lyrically as always but everyone else is slacking. john's solos are getting worse and boring. new drummer can't hang so they slowed things down.

unhallowed. that is all