Dillinger Escape Plan One of Us Is the Killer 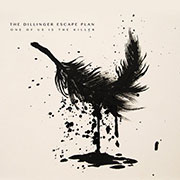 01. Prancer 02. When I Lost My Bet 03. One of Us is the Killer 04. Hero of the Soviet Union 05. Nothing's Funny 06. Understanding Decay 07. Paranoia Shields 08. CH 375 268 277 ARS 09. Magic That I Held You Prisoner 10. Crossburner 11. The Threat Posed by Nuclear Weapons
2013 Sumerian Records
Our score 7
by Derek Rydquist
5/23/2013
As one of the most recognizable and diverse acts in extreme music, it's hard to talk about The Dillinger Escape Plan without discussing their long history and place in the music world as a leading act. Admittedly, I stopped actively following DEP after Miss Machine (2004) but have remained moderately interested since, so I will avoid discussing the evolution of their catalog and just focus on this album. As you can expect, One of Us is the Killer is a good album that has exemplary musicianship and vocal performances, great production, and will end up being on a lot of people's year-end favorites list; but is that enough to really matter at this point in the band's career? Another, maybe even more important, thing to consider is if we should expect anything too new from a group that basically invented and defined a style of music (one which they still only truly inhabit by themselves). From the first note of the first song, you know what you're getting yourself into. "Prancer" opens up with some staccato high notes and punctuating percussion, then dives headfirst into a dizzying, odd-timed, dissonant mid-paced section. We're quickly thrust into DEP's signature blasting "mathy" (as the kids have deemed it) section and, yep, we have an awesome song on our hands. All good things must come to an end though, and we are hit with an awkward attempt at a chorus, hook, or whatever you want to call it. It's a moderately obnoxious, grating stab at being catchy, and really draws you out of the song's prior mood. Sure, the track goes on and has more cool parts and a nice structure, but you're left with a sour taste from the previously described section. This isn't only a problem on "Prancer," but my chief complaint with the entire album. There are parts in almost every song that just seem forced, and essentially dismantle what could have been true songwriting genius. In their slower songs "Paranoia Shields" and "Nothing's Funny," they feed you overly complex parts that draw you out of the spell being woven for you, and as mentioned, the faster chaotic songs are injected with poppy filler that detracts from the overall menace. Generally speaking, DEP is a pretty difficult band to listen and definitely isn't for everyone; I doubt that sprinkling a little pop sensibility into their inaccessible songs is going to get someone hooked on their sound. Ironically, the bad catchy, cheesy parts do their job and get stuck in your head and at the end of the song you're left only remembering the part you didn't like. It's rather unfortunate because the album really has a lot going for it. In songs like "Understanding Decay" and "Magic That I Held You," Dillinger shows that they can indeed craft sections where they utilize singing and "catchy" parts without having to adhere to some notion of "pop"; these really show the personality of the band that we want to hear. Over the years, DEP have proven that they are able to write great songs from all ends of the extreme music spectrum, and the title track of One Of Us Is the Killer is no exception. It's a perfect example of the band bringing their signature sound to a song that doesn't have any of their signature parts. They're able to convey chaos through attitude, not by using random sporadic moments to remind you that you're listening to DEP. Vocalist Greg Puciato is really given a chance to display his range and talent on this song, helping me to realize that I haven't been giving him enough credit for the large role he plays in shaping DEP's sound. By allowing him an open song structure and room to sing, we are really able to appreciate the band in another light, rather than being forced into another claustrophobic, wanking riff. I recognize that I haven't said the most positive things about this album, but that's not to say that it isn't good. This is DEP we're talking about here. You know that the instrument and vocal performances are going to be next level. You know the songs are going to be crazy as shit. You know the album is probably going to be good, and even if you don't like the band, you'll be able to respect that no one else can do what they do. At this point in their career I can't say anything new about how good they are; it's much easier for me to lend my criticism. I just wish that they would keep their very technical songs very technical, and their slower and smoother songs slower and smoother. They have proven that they can write (not to mention perform) great songs in both of these styles, so one can only hope that they'll focus primarily on strengthening the traits of each. Perhaps then they will be able to push the boundaries of extreme music even further than they have in the last 15 or so years. Bottom Line: Do you like DEP? If yes, get this album. If not, I doubt this one is going to sway you into becoming a fan. One of Us is the Killer is a solid album, but the Dillinger Escape Plan still haven't been able to find the perfect balance that will make everyone a believer.

Well this review renews my faith on how lambgoat reviewers suck! 7/10 while even the most hardened reviewer gave it a 8/10 and above. Lol you idiots!

No one will be talking about this garbage in 3 weeks. Barely deserves a 5

so, the new Hatebreed gets an 8 and the new Dillinger gets a 7 because it's the same old shit??? you're retarded. I actually like Hatebreed, but if it gets an 8, this should get a 47. again...retarded.

DEP is f*cking amazeing f*ck people who hate on others dreams f*ck the guy under me f*ck him with a broken bottle...gay

the last line of this review shows how much you miss the boat when it comes to DEP. they have no desire to make Anyone a believer. they're not f*cking missionaries. if anything they're prophets.

paranoia shields is such a badass song

Another laughable Lambgoat review. Hope the 5 other people that read this get a chuckle too. After 15 years, you'd think people would stop comparing what this band does to Caculating Infinity. Haev some respect!

Can we Alex Lambgoat do reviews please does a better job?

I knew LG would give this album a bad score. No one here writes good reviews anymore. 10/10 easy.

I know I'm in the minority, but I've found the bulk of their "mathy" noodly stuff to be boring and uninteresting. The more mellow and straightforward rock songs are usually ten times better written.

They played in Grand Rapids a while back Greg left behind a bottle of RPN Havoc and some H-Drol.... It's true, but you didn't hear it from me. You know how I hate starting shit.

f*cking pile of wank. Kill yourself now and spare the world any further attempts at a journalism career that will never go anywhere.

Meh, boring album, this is Dillinger by numbers. Worst release after their debut EP

P.S. this was a very poorly written and unfocussed review, but that it isn't anything new for Lambgoat

has anybody else noticed who wrote this review? hint: he was in a well known band

The Faceless sucks worse than this record

I think about 90% of the album is incredible. I don't care, I still love this band.

this album definately deserves better than a 7

The Faceless will soon appear in court to discuss allegations of copyright infringement filed by Through the Eyes of the Dead and the popular 80's cartoon Silverhawks. Details to follow.

what the f*ck is H-DROL and BLA BLA BLA HAVOC?

I lost interest in them after Calculating

god you guys still bummbed about Dimitri, time to get over it.

this album gets better and better

I became a believer after seeing their performance at the California metalfest. Truly amazing band