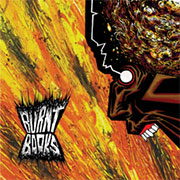 01. Selfish Friend 02. Empty Eyes 03. Dig A Little Deeper 04. Materialist Conspiracy Theorist 05. Abandoned 06. In A Shallow Grave 07. Unforgiven 08. Liar 09. Golden Gates, Golden Streets 10. Pretty Daughters
2013 At A Loss Recordings
Our score 7
by Daniel Marsicano
4/14/2013
You know what punk and hardcore music has been missing? The banjo. Yeah, that sounds weird, doesn't it? The banjo is as punk as Sum 41, however, don't mention that to Burnt Books. They seem to relish having such an offbeat instrument involved in their music, but don't worry too much; it's not overused on the band's debut album. Most of the material on this self-titled effort is experimental punk/hardcore, not too far from the ballpark in which Converge plays. With the mention of a banjo, either your curiosity is piqued, or you're already long gone. For those who stuck around, the banjo and vocals of Zoe Lollis lend a stripped-down flavor to "Materialist Conspiracy Theorist" and "Liar." They are as long as the rest of the songs, making them not just unnecessary interludes. Though their inclusion is jolting if the album is being listened to all the way through, the songs maintain a sense of raw introspection. Lollis keeps her voice soft and timid with the banjo-only songs, but the rest of the material is prime fodder for her vicious screams and wails. Her range is enormous, and every song makes sure to use as much of it as possible. Going from a taunting spoken word to a throat-ripping yell is just standard practice for Lollis, and her range reminds one of Jucifer's Gazelle Amber Valentine. It's hard to pick out just one particular instance, as the debut as a whole could be a singular highlight for Lollis. Burnt Books gets into a focused energy on no-frills nail biters like "Dig A Little Deeper" and "Empty Eyes." Heavy on bass and nuclear riffs, the band competently delivers a buffet of blistering music. Most of these songs move quickly, and have a kinetic instrumental style that makes them more durable than the average punk/hardcore tune. Slowing the pace to a screeching crawl on "Abandoned" and "Unforgiven" puts some space between the next bashing that is bound to occur. There is that segment of an audience that wants their punk and noisy music to be just that, all without any oddball songwriting. Those who feel this way can avoid the banjo stylings of "Materialist Conspiracy Theorist" and "Liar," and still have eight other frantic tracks to enjoy. Only comprised of 30 minutes of music, Burnt Books' debut is light on filler and tight on aggro punk/hardcore. Bottom Line: Punk/hardcore that plays around with tempo changes and a few banjo-led tunes, combining to form a solid debut for Burnt Books.

holy shit a 7 rating by lambgoat? NO WAY!

This is awful, awful sub-Mike Patton bullshit. Almost unlistenable. The vocals are some of the most garbage I've ever heard. Stop fawning over them because it's a pair of t-ts behind the mic. And the banjo gimmick sticks out like a sore thumb.

They recorded a demo version of the LP, minus the acoustic songs that's still on their bandcamp. If you really have a problem with the vocals, maybe give the demo a listen. I feel like production really sucked some of the life out of their record. Burnt Books rules!

Banjo is not punk? Right... So we are just ignoring psychobilly and folk punk I suppose, because it is not like those have existed for 20+ years.

wow, that "t-ts behind a mic" comment was really misogynist and shitty. Way to go jerk, i would love to slap you in the face for that statement.

it's a pile of stinking shit.

if i ever need to find overflowing hate from people i'll come to look at comments on lambgoat.... i'm honestly surprise if these people who have such puke for words to say haven't commited suicide yet because certainly no one else but there mothers would love them.