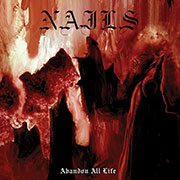 01. In Exodus 02. Tyrant 03. Absolute Control 04. God's Cold Hands 05. Wide Open Wound 06. Abandon All Life 07. No Surrender 08. Pariah 09. Cry Wolf 10. Suum Cuique
2013 Southern Lord Records
Our score 9
by Luke Henderson
4/4/2013
Nails seems to have set out to prove one thing: you don't have to be flashy to get noticed. Most notably on 2010's Unsilent Death, the group chose to silence all naysayers by delivering a consistently impressive and uncompromising blend of metal and hardcore. The only question that remained was whether this group had already peaked, or whether past accomplishments were simply a hint at what the band was capable of. Abandon All Life begins with "In Exodus," which in many ways is representative of the entire album; an expert mix of churning, crushing hardcore and blistering grind-based riffs that do not relent for even a second. Following this, "Tyrant" throws aside any pretext of dynamics in favour of creating one of the most genuinely aggressive songs of the year. This is further augmented with vocalist Todd Jones screaming "I want to feel you suffer" with complete conviction. It is on this track that it becomes apparent that Jones has made an admirable effort beefing up his vocals since Unsilent Death. While it would've been nice to hear him a little higher in the mix, his scream sounds more enraged and menacing than ever before, which is one of the most pleasant surprises on this album. The group's addiction to speed and fury is further demonstrated on the metallic "Absolute Control," one of four songs that clocks in under the one-minute mark. The growth and maturity of Nails really begins to shine through on two of the album's most intriguing and impressive songs. "God's Cold Hands" starts off as another blast-filled rager, but Jones and Co.'s hardcore influences become readily apparent as the song transforms into a slower, heavier beast with a bludgeoning breakdown and guttural backing vocals. Next, "Wide Open Wounds" proves that just because a band specializes in short and fast songs doesn't mean that they aren't able to pull off longer, more complex numbers. Rather than delivering a boring or overly-repetitive track, this is a haunting song that builds on solid sludge-inspired hardcore riffs and delivers one of the only chances for the listener to catch their breath before delving back into high-speed insanity. Following the aforementioned reprieve, the album's second half renews the ferocity almost immediately. "Abandon All Life" and "No Surrender" both demonstrate that while playing fast will momentarily satisfy the listener, only by blending speed with an intense forcefulness will the songs stand on their own. Ending off the album are two of the diametrically opposed songs; "Cry Wolf" is twenty seconds of pure ferociousness, which makes way for the bludgeoning and murky "Suum Cuique." Lasting over five minutes, this single dark and ominous track accounts for almost one-third of the seventeen minute-long album. The only real complaint left to make is that the album ends at this point. Ten songs in fewer than twenty minutes hardly feels like a proper full-length, but given the overall quality (and intensity) of Nails' output, it's hard to argue that this album isn't a complete experience. Bottom Line: Abandon All Life should be considered Nails' best work to date. Impressive song writing, unbridled intensity, and countless high points make this an album that will surely stand the test of time.

Absolutely fierce!!! Firing an all cylinders. Nails hit out if the park once again!!!!

never got into these guys, but this is a damn fine release, its one of the most abrasive releases I've heard that I've enjoyed in years.

f*cking awesome! And they didn't need YOUR money to make it. Eat your hearts out dipshits from misery signals!

to understand this record and why it exists, go listen to The Secret

jesus christ this shit is gooooooood

I liked this album when it was done by Nasum

Todd Jones is a cop.

take a look at this band's twitter account. these geeks go after any reviewer who doesn't worship their record. are these dudes high school kids? (that's a rhetorical question - I know homeboy is like 40 with a bunch of 20 year old mutes filling out the rest of the band)

LOL at listening to The Secret to figure out this record. It is 100% a Morbid Angel and Nasum rip off album. That said it is still good and enjoyable to listen to.

you were probably ripping on nasum when they were around. knowing the dude's age, having a twitter account= gay as f*ck

Nasum is good and has no cops in the band. Nails does have a twitter account and is gay as f*ck.

".....past accomplishments were simply a hint at what the band was capable of." never end a sentence with a preposition.

This band is overrated as f*ck