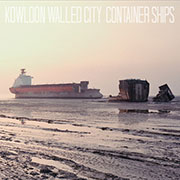 1. The Pressure Keeps Me Alive 2. 50s Dad 3. Beef Cattle 4. Container Ships 5. Cornerstone 6. Wrong Side of History 7. You Don't Have Cancer
2012 Brutal Panda Records
Our score 9
by Nick
1/2/2013
You may have submitted your best of 2012 lists too soon. San Francisco's Kowloon Walled City, also known as the city's house band for heavy shows, has snuck something fantastic into the last few weeks of the year (or world, depending on your diet of news and/or John Cusack movies). That something goes by the name of Container Ships, and as a literal interpretation would imply, there is certainly plenty of weight to go around. While 2009's Gambling on the Richter Scale was the rager, chock-full of Unsane-style grooves and some of the best low-end in recent memory, Container Ships offers up an exploration of broader song structures and economical restraint that is somewhat difficult to quickly categorize. The Unsane starting point still applies, though this time it might be the spacious, mildly hypnotic tracks that often appear at the end of the Brooklyn trio's albums that serve as the better comparison. Still, that won't get us all of the way there, considering that there is an almost Shellac-like use of dead time and instrumentation in the pair of long-running tracks that bookend Container Ships ("The Pressure Keeps Me Alive" and "You Don't Have Cancer"). A word of praise: The build in the closer that starts at around the 4:30 mark and peaks with the addition of higher pitched backing screams is absolute perfection. It gets me every time. For those that had the chance to enjoy the stellar Lose / Lose / Lose three-way split between Fight Amp, KWC, and Ladder Devils, the noticeable shift in sound might not be a complete surprise. "The Commuter" continued the path of Gambling's "More Like the Shit Factory" and sought out slower tempos to push the boundaries of heaviness, though that doesn't account for the remarkably clean feeling that persists on the band's newest offering. That pair of tracks owed much of their songwriting lean to giving room for distortion to breathe as opposed to the use of more sparse, calculated arrangements in Container Ships. It's not so much a post-rock/metal sound since there isn't much tremolo-ing or delay to go around, but it certainly does sport a few forays into the sphere of guitar-picked melodies and longer instrumental periods. One could also argue that there are a few parallels here between the slower tracks and Neurosis' subtler moments, especially on the last few releases. At the end of the day, Container Ships perfectly straddles the line between still packing enough of the KWC grooves of "old" ("50s Dad" is the record's hard-hitter) and a step into a new sonic direction that will surely encourage some collective head scratching to pin down the influences. It will take a few extra spins to sink in, but the decision to push things beyond just making another greatest-down-tuned-Unsane-hits album is definitely commendable. While you'll always have Gambling on the Richter Scale for some head-banging in the Tenderloin, now you're equipped with Container Ships to support those equally important midnight drives up 280. Bottom Line: Kowloon Walled City is San Francisco's best current heavy band. Container Ships is their most impressive release to date. Do the math.

This band rages, poster above poses.

Shit is whack. Reviewer must be a f*cking retard. Die, gay.

REALLY f*cking good. Typical Lambgoat commentards hating on it. Go put Lionheart on or something.

This album is great. Well thought out, paced, and interesting riffs don't make it pretentious, you f*ckheads. It makes it good.

comparing people to shellac and unsane is a bold move. guess ill go check this out now.