My Dying Bride A Map of All Our Failures 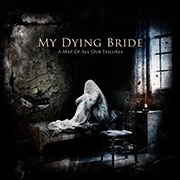 1. Kneel Till Doomsday 2. The Poorest Waltz 3. A Tapestry Scorned 4. Like A Perpetual Funeral 5. A Map Of All Our Failures 6. Hail Odysseus 7. Within The Presence Of Absence 8. Abandoned As Christ
2012 Peaceville Records
Our score 7
by Daniel Marsicano
11/22/2012
Two decades ago, My Dying Bride released their debut album As The Flower Withers, an influential symbol of what would later be known as the death/doom sub-genre. They have been purveyors of death/doom since then, adding more gothic influences and even some electronic components (most notably in the experimental 34.788%...Complete). Their twelfth album, A Map Of All Our Failures, is just as gloomy and downtrodden as their past 11 albums. The band hasn't gotten into a creative rut yet, though not straying far from what The Dreadful Hours accomplished a decade ago garnishes the album a mixed reaction. If this is someone's first time with My Dying Bride, expect laborious doom metal pacing and dreadful moods dominating the hour-plus album. Hope has long been a relic to the band's songs, and that is just as prevalent on A Map Of All Our Failures. No acoustic strumming on "The Poorest Waltz" or light tempos on the title track can steer the band away from the dreck of life, though it would seem forced if the band went all happy-go-lucky on us at this point. Some things are best kept the same. My Dying Bride has always had that innate capability to open their albums with a stunner, and "Kneel Till Doomsday" does that for A Map Of All Our Failures. A resourceful, vivacious start to the album is bombarded by a great death metal-driven breakdown, with harsh vocals more vicious than the laughable attempts made on their last album, For Lies I Sire. The death metal side of their music is tucked into songs like "Hail Odysseus"; there is no one complete death metal-oriented track like "A Chapter In Loathing" (considering the poor quality of that song, it was probably a wise choice). For Lies I Sire brought the violin back into the band's signature sound, which was the first time it was heard in prevalence since 34.788%...Complete. While A Forest Of Stars member Katie Stone handled the violin playing on that album, Shaun MacGowan takes over the position. His work is understated, not as boisterous or tender as Stone's playing. He does get a great role as band leader in the early moments of "Within the Presence Of Absence," and his keyboards bask "Abandoned As Christ" in the bleakness needed for the dark subject matter. Those hoping that My Dying Bride would apply some of the ideas of the unconventional Evinta or the 25-minute opus The Barghest o' Whitby will find the album to be standard fare. The band love to keep the songs grounded, with a periodic burst to wake the proceedings up. It's not a common occurrence, so the listener has to make sure to take notice. Some people may be turned off by the drifting clean vocals from Aaron Stainthorpe, who poses questions like "Where was God when I most needed him?" with stone-faced sincerity. For doom metal fans, the name My Dying Bride is really all that's required to set expectations for this album. It's not that the band has become stagnant per se. They have become like the Motörhead of doom metal, where every album is enjoyable, yet there is little deviation between albums. The band hit a high point with The Dreadful Hours and Songs Of Darkness, Words Of Light, but have been unable to match that quality over the course of a whole album since. A Map Of All Our Failures is My Dying Bride doing what My Dying Bride does, which could cause a variety of reactions depending on one's personal taste for death/doom metal. Bottom Line: After two decades, My Dying Bride keeps trekking ahead in the death/doom metal field with the sharp A Map Of All Our Failures.

Boring. Dude, you need to pick more interesting stuff to review. Like maybe something that would appeal to people besides metal elitists. These things you've been reviewing of late, they've been good for what they are, but not much crossover appeal.

Good record. gay above is bored because it didn't come out on Sumerian.

I will listen to this if I have trouble sleeping.

Glad you guys reviewed this, or I wouldn't have even known it was out. Great band.

^He means no breakdowns.

**anonymous posted 1 day ago Boring. Dude, you need to pick more interesting stuff to review. Like maybe something that would appeal to people besides metal elitists. These things you've been reviewing of late, they've been good for what they are, but not much crossover appeal.*** You must not be able to read all that well, notice the second word in the logo dummy.

That must be a pretty huge map....