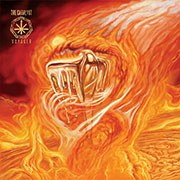 01. (The Final Voyage of the) Spaceship Catalyst 02. King of Swords 03. Square Waves 04. Occult Blood 05. Septagon 06. Jupiter Brain 07. Breathers 08. Big Bend 09. Open High 10. Voyager
2012 Forcefield Records
Our score 8
by Nick
11/12/2012
A word of caution: This shit is grimy. Not grimy in the currently popular "my hardcore records all now sound like black metal" type of way, but rather in the "here is what all my favorite records would sound like mashed together with plenty of booze, just-about-legal drugs, and amplifier feedback" vein. You see, Richmond's The Catalyst had previously showed a knack for writing some cool jams mixing some AmRep harshness with grungy catchiness, but this Voyager record opens up the floodgates for all things heavily distorted. Take the leadoff track, an instant groover that will make all fans of Louisville's Lords immediately gracious. Yet while Chris Owens and Co. might have cut it off at the 90-second mark, these Catalyst dudes break for a cool segue with some hypnotic guitar work before re-hitting the punk ‘n roll grindstone. What's best about Voyager in comparison to the band's previous releases is how much they've cranked up the atonal, vaguely Coalesce-ish, hardcore influence. "King of Swords" is the first track to touch on that, and does so immediately with heavy metallic riffing and Sean Ingram-type throaty screams. A mid-section with some room to let chords ring out and subject them to some gratifying neck-bends allows the band to tie it back into the stoner lean of the record, but even that doesn't hang around long; soon enough we are back in the land of riffs. It would also be a mistake not to mention the similarities to the late greats of the rock-meets-hardcore world, Akimbo. The back-to-back pair of "Breathers" and "Big Bend" will surely inspire some to forge steel and lay some fucking stone. The remaining dimension of The Catalyst is captured in the two seven-ish minute long-runners, "Septagon" and "Voyager." Appropriately placed to close out each side of the LP, these offerings rein back in the often unpredictable, feedback-drenched tendencies and cash in on some impressive songwriting dynamics. After three minutes of fuzzed-out build, "Septagon" ultimately finds itself back in the noisy, punkish dirge that drove the tracks that preceded it. But it is the title track that provides the biggest surprise. Much more subdued than the rest of the record and sporting clean singing that —- and I am reaching deep here -— sounds incredibly similar to the old Detroit three-piece Heads Will Roll, "Voyager" is slightly rough around the edges, but a perfectly fitting closer for an album that simply does whatever it wants. The dudes in The Catalyst aren't going to win any awards for supreme musicianship or compositional genius with this one, but that's not the point. As a listener, I've always tended to lean toward the unbridled energy that can come with harsh edges and a fuck-it-all attitude, rather than the calculated, squeaky-clean end of the heavy music spectrum. If you're the same way, The Catalyst's Voyager perfectly fits the first category. Everything from early ‘90s noise rock and grunge to the ‘00s Louisville sound to chaotic metallic hardcore is in there. I would love to drink some whisky and work on my tinnitus while these guys play, for sure. Bottom Line: The Catalyst's Voyager is a true amalgam of the dirty, noisy side of heavy music. If you've got a blend of Melvins, Lords, Akimbo, Nirvana, and Coalesce sitting on your shelf of tunes, this is an obvious pick-up.

pick up my balls gay, shit review for shit band for shit album for shit board for shit website. shit.

Anonymous....you are an angry person. Get bent.

i wanted to shit on this record, because of the artwork, the name and well just because i'm a shitty person, but this is actually pretty good- once i got around to listening to it

So this is a pretty sweet album. And hey! These guys are cool enough to have the shit up on bandcamp. thecatalystrva[dot]bandcam p[dot]com

No free download over the net? No care gay.