Swallow the Sun Emerald Forest and the Blackbird 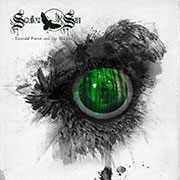 01. Emerald Forest and the Blackbird 02. This Curt is the Deepest 03. Hate, Lead the Way 04. Cathedral Walls 05. Hearts Wide Shut 06. Silent Towers 07. Labyrinth of London (Horror Pt. IV) 08. Of Death and Corruption 09. April 14th 10. Night Will Forgive Us
2012 Spinefarm Records
Our score 6
by Scott Ustel
10/30/2012
Smothered in tragedy and wallowing in deep somber chords, Swallow the Sun's latest offering Emerald Forest and the Blackbird is one of the most serene heavy metal records I've heard is some time. It's not an easy task to merge the delicate melody, intricate instrumentation, crushing passages and baleful moaning in such a remarkable fashion. These Finnish metal gods aim to please, delivering the goods on every sonic spectrum they can think of jamming into their latest opus. The album begins with serene female vocal melodies backed up by placid keyboards. These soon explode into the audio landscape only to lead us right back to the same winding female voice that welcomed us here originally. Placid and serene are terms likely to get thrown around loosely when describing Swallow the Sun's latest offering, their fifth stateside release. Emerald Forest and the Blackbird is on the more unique spectrum of doom records I've had the opportunity to wade through this year. The name is actually very indicative of the overall feeling the band conveys. Much like US Black Metal act Wolves in the Throne Room, these songsmiths of soul crushing doom like to use ancient sounding instrumentation. Choosing to use these acoustic axes instead of their traditional weapons of choice, the album begins to take on a very romantic feel. I don't want to say they sound like Opeth, but when I hear the clean male vocals come in I'm reminded of their album Ghost Reveries, possibly the only one I enjoy. Although not as complex or as winding as Opeth compositions, these songs still take us on a journey worth riding out until the last note. The washes of female vocal harmonies that sweep in and out of songs stem the tide of monotony. I can't say that I am terribly blown away by this album in terms of originality, although the songs themselves are both well written and well performed. Even the tone of the recording is balanced - slick enough to allow for some impressive displays of dynamic acrobatics - helping to achieve a nice compromise for modern and vintage instruments. The opening ballad "Emerald Forest and the Blackbird" also happens to the title track and it's a pretty good example of what you will be hearing for the duration of this album. Its thoughtful, complex and full of a range of moods. Sometimes doom records can become monotonous, a fate this album manages to avoid thanks to creative interludes and delicate passages that outline the softer side of the band. Another favorite song of mine, "Hearts Wide Shut," sits around the transition point to the middle of the album. It has all the elements we've already been exposed to in this album, but on top of that we are introduced to a slightly faster riff that comes and goes towards the outro of the track. Crushing and catchy at the same time, it's a standout moment on this fairly average record. "Labyrinth of London (Horror, Pt. 4)" might be the best track overall though, anchoring the album midway through with glorious keyboard smothered guitar work that actually sticks to your ribs. Another notable element of this song is the lyric "Fire walk with me," a nice reference to Twin Peaks, the cult television series from the early 90's. An absolutely epic riff married to an outstanding lyric paying homage to a truly mind bending show. Very cool indeed, but just not enough in the end. Bottom Line: Although not a remarkable addition to the doom genre, Emerald Forest and the Blackbird has moments that shouldn't be missed. There is vision at work here and it perhaps makes more sense as the album rounds itself out, ending on the stellar track "Night Will Forgive Us." None of the album is bad, however, its strongest moments seem a little too easy to pick out. The riffs seem uninspired, leading to significant problems when it comes to guitar oriented listeners. Only the intricate and often addictive vocal lines seem to standout as noteworthy, which is unfortunate for an album meant to be definitively crushing.

this isnt a doom record, moron.

I believe he is refering to euro-style doom, such as My Dying Bride, not doom like St. Vitus or Trouble.

First album from these queers I didn't like. And by didn't like, I mean a flop of such stinky shit so as to negatively impact how I feel about the band as a whole. Suck my dck everyone.

Atheist tool garbage. Kind of like 99% of the crappy hardcore bands these days.

This album bored the shit out of me. Nothing like their first two releases. Did this reviewer say the only album from Opeth he likes is Ghost Reveries? What the f*ck!

Swallow the c-m is what this should be called.