Between The Buried And Me The Parallax II: Future Sequence 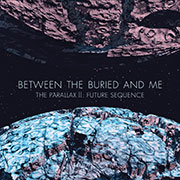 01. Goodbye to Everything 02. Astral Body 03. Lay Your Ghosts to Rest 04. Autumn 05. Extremophile Elite 06. Parallax 07. The Black Box 08. Telos 09. Bloom 10. Melting City 11. Silent Flight Parliament 12. Goodbye to Everything Reprise
2012 Metal Blade Records
Our score 8
by Daniel Marsicano
10/17/2012
Between The Buried And Me put out a landmark release in 2005 with Alaska. Their first album with the lineup that has held steady to this point, it was a jaunt, progressive metal album that only seemed like a distant possibility given their two previous releases, their self-titled debut and The Silent Circus. Colors was and still is their masterpiece, an hour-long track divided into eight tracks that was the turning point of their career. The Parallax II: Future Sequence won't be a mystery to those who have followed the band since Alaska, but it still finds a way to be engrossing and rich in detail that warrants at least a dozen play-throughs to achieve critical mass. Building off the story started with last year's The Parallax: Hypersleep Dialogues EP, The Parallax II: Future Sequence is a 70-plus minute trek through millions of light years and the destruction of humanity. It's a concept album that has more value with its lyrics on hand, though one doesn't need to engulf themselves in backstory to enjoy the album. It's simply a nice bonus for those that like to dig deeper into their music. "I wonder if I'm alive" is the first line on The Parallax II: Future Sequence crooned by vocalist/keyboardist Tommy Rogers, who has transformed over the years into a top-tier vocalist. His harsh screams bite with the viciousness of a Rottweiler while his eccentric clean tones bask in wonderment and poise. He gets plenty of chances to use both, though he really stands out on the quirky "Bloom," where he gets caught in the wake of a surf rock breakdown that sounds like a coked-up Beach Boys. The album moves its way through twisting modern prog and brief interludes that tie the space between tracks together. It's a formula that is fit for a whole album; when split up individually, the electronic noise of "Autumn" and the low-key "The Black Box" don't hold up as well. Those looking for the next "Swim To The Moon" or "White Walls" will be left in awe at the 15-minute "Silent Flight Parliament," which generously employs the calmer dynamics that BTBAM has improved upon with each successive album. These guys are superb musicians, and that was never in question before The Parallax II: Future Sequence, and it still isn't after one listen. Jamie King returns as producer, and he yet again gets the best sound out of the band. Of special note is the best guitar solo John Petrucci never wrote in the closer "Goodbye To Everything Reprise," in addition to bassist Dan Briggs' total domination of his instrument on every single song. Just when we all think we know what Between The Buried And Me is gearing up for, they pull out a few new tricks. The Parallax II: Future Sequence has many of the characteristics of past albums, but feels more natural than some of the more forced melodic sections heard previously. The band is comfortable in this prog metal field, while making sure not to abandon the more death metal-centric side of earlier records. The Parallax II: Future Sequence won't win back the old fans who were dumbstruck by Colors, but the fan base that has grown steadily since that time will accept The Parallax II: Future Sequence as a terrific addition to Between The Buried And Me's catalog. Bottom Line: Between The Buried And Me further positions themselves as one of the best progressive metal acts today with the exhilarating The Parallax II: Future Sequence.

man, the lg consensus about this band has changed over the years-- did webby hire some young'ns

it's hard to do anything but laugh when listening to this band.

What do you people even f*cking listen to?

I did not enjoy The Great Misdirect or that EP very much, but I have enjoyed this one a lot. Glad they threw in some new stuff to make them interesting again.

What was the point of that review? To point out the obvious and fail at it? This album beats colors. Listen for yourself.

Band needs to give up

I found my old CD demo for btbam a few weeks ago, could this be ebay silver? (gold is too much right now)

Real solid album. Not as good as Colors though. Also some funny comments here. Id like to know some of you listen too since you guys are too mature for this band....

So happy with the fact that they have figured out how to reassemble their songwriting skills to finally bring back the element of musical cohesion we hear on Colors. I also wasn't impressed with TGM or Parallax 1 but this album, seriously gives colors a run for its money. I would say better. Ill take the wrap of being called a fan-boy for this one, its the least I can do for the time and genius they invested into this.

stole 5 of these from WalMart and sold them to gays for $5. ahhh dip son!

i enjoyed hypersleep dialogues much more than this one. it's cool how their sound is starting to evolve a little more though-- the great misdirect and hypersleep sounded to me like colors part 2 and 3

The best part of the album for me is definetely: 09. Bloom 10. Melting City

I like the part in that one song where it breaks into 50 East Indonesian children chant the fourth stanza of Edgar Allan Poe's The Raven over sweep-picked arpeggios on a Cello and a sample of Mo Money Mo Problems.

this album does not beat colors or exceed the high expectations they left me with after Hypersleep. of course fanboys, who are only looking for the fastest weedles ever, will compare this to colors.

I stopped caring at Colors and it wasn't because I was dumbstruck.

Between the boring and me

i am disgusted by this crap. gimme a break

album is too nasty

So these guys get paid to play music? That's pretty cool. Let's make fun of them for it.

Paid? I doubt these yawnfests make enough to even own a van to live in yet alone a house and a car. Pleased to be giving me a 401k statement, T. Hanks.

Boring album. It seems they've tried to write a more 'mature' album, but at the cost of eliminating any and all hooks, catchy parts, breakdowns etc. They are great live though, saw them again recently

Yeah they do get paid, and very f*cking well. They deserve every penny of it. If you had a brain in your head you would know that. Oh yeah, and by the way everyone knows they all shred their balls off, you sound like an uneducated jackass.

...and for the guy down there...watch some studio footage of The Great Misdirect. There's a brand new BMW parked right out front of the studio. I think they're doing ok...

I saw them like 20 times for their first album, a few times in bastuffts, one that was broken up by the cops, where they were allowed to play 1 song. So while I'm very happy for them, there's just something missing for me when I see them on such a huge stage.

I found this album to be pretty boring as well. And the "surf" riff as described above, which is actually a 12-bar blues riff, really is terrible. Nothing in their catalog touches the end of White Walls. You want to listen to something really good? Listen to FZ - Uncle Meat.

THEY SUCK f*ck YOU

Holy shit...all these haters hating on such a great band. WOW I remember why I got out of metal know. Such a bad scene. Too many KIDS

This album is fantastic. I see people posting about it not being catchy, or having any breakdowns. You want breakdowns, try metalcore. These guys have written an awesome album, and it is far above majority of the metal released these days. You find it boring because you don't have the attention span to listen to something that actually takes skill and creativity.

Between The Buried And Me Album Reviews