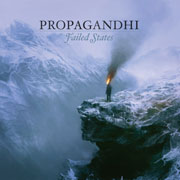 01. Note To Self 02. Failed States 03. Devil's Creek 04. Rattan Cane 05. Hadron Collision 06. Status Update 07. Cognitive Suicide 08. Things I Like 09. Unscripted Moment 10. Dark matters 11. Lotus Gait 12. Duplicate Keys Icaro (An Interim Report)
2012 Epitaph Records
Our score 9
by Luke Henderson
10/3/2012
For many within the aging punk community, the release of a new Propagandhi album is one of the few things left to get excited about. Unlike many other early Fat Wreck Chords bands, who have spent the bulk of their careers trying to recapture the immediacy and rawness of their early releases, Propagandhi has demonstrated that growing up in punk doesn't necessarily mean becoming stale or boring. Early releases like How to Clean Everything and Less Talk, More Rock provided listeners with well-crafted political skate-punk songs, but it wasn't until the release of the group's third LP, Today's Empires, Tomorrow's Ashes, that a more mature and versatile Propagandhi emerged. Since this time, each subsequent release has been faster, more complex, and more intense than the one before; Failed States is no exception. Picking up where Supporting Caste left off, Failed States showcases two sides of Propagandhi. On one hand, a band centered around layered harmonies and introspective lyrics, and on the other, a group of anarchists dedicated to resurrecting the sonic souls of Canadian thrash legends like Sacrifice and Razor. Rather than distracting or confusing, this musical/lyrical schizophrenia helps make this record more interesting and enjoyable on several levels. The album opener, "Note to Self," wastes no time confronting the listener with intricate melodies and elaborate guitar work that somehow avoids seeming drawn-out, despite clocking in at almost six-minutes. The group continues to blend genres on tracks like "Failed States" and "Status Update," which aim to balance punk attitude and subject matter with breakneck riffs that reveal their thrash roots. Even on more slightly subdued tracks like "Devil's Creek" and "Lotus Gait", both of which combine inventive musicianship, driving rhythms, and lyrics focused on alienation, confusion, and escape, never get tiresome or over-indulgent. Similarly, the lyrical content of these tracks, shows a somewhat restrained version of the in-your-face approach favoured in early Propagandhi releases. This record often provides a more reflective and inward focus, with lyrics that betray both the cynicism and clarity of someone who has actively tried to make the world a better place, with mixed results, for over 20 years. Although singer/guitarist Chris Hannah is responsible for the bulk of the vocal duties, bassist Todd Kowalski assumes the role of frontman for songs like "Rattan Cane," "Hadron Collision," and "Dark Matters." With Kowalski at the helm the songs inevitably become faster, more metallic, and the subject-matter becomes darker and grittier, tackling such unpleasant topics as drug addiction, the persecution of punks in Indonesia, and the abuse suffered by sex workers in Winnipeg. These tracks help reassert Propagandhi as fiercely political band hell-bent on giving voices to the voiceless any way they can. Bottom Line: For many punk bands getting older simply means mellowing out or trying to recapture lost youth. For Propagandhi it has meant abandoning the skate-punk roots of old in favour of becoming a harder, heavier, and all-around better band. Many say that Propagandhi is the best band in punk today, and Failed States will do nothing but help strengthen that argument.

This CD is really good, much more interesting musically than I remember their older material being.

This guy curses too much for me.

>with lyrics that betray both the cynicism and clarity of someone who has actively tried to make the world a better place, with mixed results, for over 20 years. That's a good line, reviewer guy. Accurate