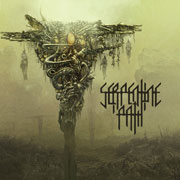 1. Arrows 2. Crotalus Horridus Horridus 3. Bats Amongst Heathens 4. Beyond the Dawn of Time 5. Obseletion 6. Aphelion 7. Compendium of Suffering 8. Only a Monolith Remains
2012 Relapse Records
Our score 9
by Scott Ustel
9/12/2012
When I hear the term "super group," two things come to mind; (1) a band of costumed folks beating up baddies in tights to protect the world and (2) a gathering of like-minded musical souls coming together to create something that goes well beyond the sum of its parts. Serpentine Path could really be either by the sounds of their self-titled debut. This band creates an unparalleled vortex of riffs that ooze dread and spit venom. I can assure you that the crushing onslaught of these four head banging maniacs alleviates any disappointment that I may have felt at the loss of Unearthly Trance. Easily one of my favorite bands on the Relapse roster, the juggernaut known as Unearthly Trance seemed unstoppable. That's why hearing that they broke up shortly after returning home from their final show of a Japanese tour was a shock to the metal community, blindsiding most fans. But fear not you lovers of thick sludgy guitars, plodding bass, ungodly howls and crushing drums, we are gifted with Serpentine Path instead. "Arrows," the first track on the album, will make you drop any apprehensions as its grinding, repetitive intro immediately sets the tone. Thanks to the addition of Tim Bagshaw, formerly of both Electric Wizard and Ramesses, these guys are beyond devastating. Would you expect any less from the three lads of Unearthly Trance joined by Bagshaw? This is like hide your pets, pack your unmentionables, and run for the hills heavy. "Serpentine Path" moves like molasses with riffs thick enough to stop a bullet, guaranteeing its longevity and cementing its status as a true monolith in the genre. The Cro-Magnon guitar work that comprises "Crotalus Horridus Horridus" is about as crushing as it comes. Even when the tempo charges ahead to double speed we're still left listening to what most bands wouldn't have the patience to achieve. Few death/doom groups can distil such a cryptic tone into their music and vocals, the agonizingly slow riffs and wailing seems to crawl and writhe like the band's name implies. Prepare yourself to be crushed by the pure sonic resonance of this recording. I would be surprised if this doesn't pop up on most critics best of lists at the end of this year. I've personally found 2012 to be lacking in terms of really high quality metal releases. Sure, there have been a handful of albums that my record collection wouldn't be the same without but it's this last quarter of the year that seems to offer the most promising releases for fans of slower paced metal. This is the kind of music meant for the modern thinking man who loves to throw the horns and ponder his life in between deep, smoky breathes. Patience is a virtue with this album though as it's a demanding listen that rewards through each subsequent spin. Subtleties not heard the first time around unveil themselves slowly, from the way the guitars feedback to the crash of each cymbal, making every return to this record a welcome new experience. This self-titled first release is comparable at times to both Ramesses and Unearthly Trance, something that should be no surprise considering the roster of the band. But where Ramesses and Unearthly Trance fell short these guys seem to excel, writing songs that never seem too long or awkward. Fans of previous output from the members of Serpentine Path won't be let down and should be pleasantly surprised by the injection of some new elements like harsher, raspier vocals and the occasional, almost mathy riffs. Check out the track "Obsoletion" for an example of some truly awesome spiral riffing. This is just one standout moment within a collection of otherwise solid compositions. "Aphelion" is another amazing song, somewhat faster and shorter than the other tracks. It does a remarkable job of splitting up the record, keeping it from getting monotonous by bringing the tempo up. It really gives this slab some well placed variation halfway through its playtime. "Aphelion" carries some serious impact thanks to the painfully slow "Obsoletion" playing right before it, a brilliant move by the band. It allows them to showcase their power and mastery of dynamics while they create tension through musical interplay and focused songwriting. Bottom Line: Once you let the slithering sounds of Serpentine Path coil around your mind you will understand what the word "heavy" means. Nothing really compares to the balls to the wall heaviness that these four practitioners of the metallic arts produce. It is a near perfect blend of crushingly heavy music, a few cryptic samples and a dark vision that leaves almost nothing to be desired. If you could buy one death/doom record this year I wouldn't recommend passing on Serpentine Path's self-titled debut. But buying only one death/doom record this year would be silly, right?

dont know how this got such a high score...boring as hell imo

baddies in tights and i stopped

this is some super-human metal my man, you should have kept reading

This is the kind of elitist shit that only " real metalheads" like. Go f*ck yourself with a tire iron.

agreed with the dude below me, the name "serpentine path" says it all wtf does that even mean?

salt is pretty butthurt. It's just boring as hell. The guy 2 below summed it up perfectly

"agreed with the dude below me, the name "serpentine path" says it all wtf does that even mean?" A serpentine shaped path... Holy f*ck the logic.

"This is the kind of elitist shit that only " real metalheads" like. Go f*ck yourself with a tire iron." go listen to whitechapel and every time i die

"This is the kind of elitist shit that only " real metalheads" like. Go f*ck yourself with a tire iron." go listen to whitechapel and every time i die You just proved his point LOLOLOLOLOLOL

you are all buttf*cking gays.

"This is the kind of elitist shit that only " real metalheads" like. Go f*ck yourself with a tire iron." go listen to whitechapel and every time i die You just proved his point LOLOLOLOLOLOL ^ You also proved a point that you got shit taste. Not enough brocore for ya?