Gaza No Absolutes in Human Suffering 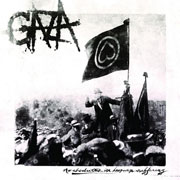 01. Mostly Hair and Bones Now 02. This We Celebrate 03. The Truth Weighs Nothing 04. Not with All the Hope in the World 05. The Vipers 06. No Absolutes in Human Suffering 07. The Crown 08. When They Beg 09. Winter in Her Blood 10. Skull Trophy 11. Routine and Then Death
2012 Black Market Activities
Our score 8
by Nick
8/28/2012
There aren't too many bands left around these days that do a good job of carrying the torch of the 2000s-era hardcore-meets-metal-meets-grind blend. Maybe it's also due to the fact that there aren't too many left that seem to try. Given Gaza's stellar 2009 release, He Is Never Coming Back, one could have bet money that they would have been a part of that departing crowd. While 2006's I Don't Care Where I Go When I Die made quite a mark with its noisy, chaotic metalcore (honest translation: early Norma Jean minus God, but better), their follow-up album sported a drastic shift in the way of full-on gloom. Depending on whom you ask, its somewhat blackened or somewhat doomy lean traded some of the jagged, pissed-off mentality for a sweeping, melancholic take on hardcore. Thus, when this year's No Absolutes in Human Suffering showed up sporting some return-to-form characteristics rather than continuing to crank up the gloomy sonic desolation, I was surprised. Take the opener, "Mostly Hair and Bones," which quickly transitions from an ominous, lone guitar into flash of grinding, Coalesce-inspired cacophony. "The Truth Weighs Nothing" pulls a page straight from the Converge book -— or ongoing epic novel, perhaps -— speeding through a blasting intro to find itself dishing out some seriously catchy hardcore anthem essentials. There is also the meandering, off-time groove that shows up mid-track in "This We Celebrate" that, if lined up in a blindfolded hardcore taste-test, would be difficult to separate from much of what was hitting the streets in 2001. That's not to say that this is a paint-by-numbers record. Far from it, in fact. It is simply a thrill to hear these elements front and center. But the dudes in Gaza continue to push more creativity into a box that once seemed so tightly defined. The pulsating hook of "Skull Trophy" that pauses ever so briefly for a slightly bent jolt of distortion is one of the coolest things I've heard in a while. The title track's hypnotic repetition of a two note jam may be simple, but far from stale. Listen a little closer and you'll hear some subtle churn in the bass work behind the cyclical guitar work and group screams. Don't underestimate how hard it is to perfect subtlety in an often one-dimensional, completely compressed hardcore world. Potentially the most impressive aspect of No Absolutes in Human Suffering is how effortlessly Gaza transitions its dissonant outbursts into spacious melody. Nearly half of these tracks slide into soothing, introspective progressions with seemingly no obvious path from A to B. Check out "Not with All the Hope in the World" to understand how they pull it off, or "When They Beg" for an example of melody so good that it would easily stand alone (echoes of something that the East of the Wall guys routinely pull off are in there somewhere). This is the sharpest, most accomplished record put forth by Gaza to date. Even though the miserable anguish of He Is Never Coming Back may have had listeners expecting something even less accessible, No Absolutes in Human Suffering has no difficulty succeeding in blending many of the core elements that we all used to love with a clear affinity for sneaking in plenty of melody. I'm into it. Bottom Line: The walls of my cubicle fear me when I drink coffee and listen to this record at 7:30 in the morning. Fans of the 2000s essentials of everything from Botch and Coalesce to Pig Destroyer and Burnt By the Sun will be reminded how hard-hitting this stuff can be when done right.

Norma Jean and Gaza do not belong in the same sentence

not my f*cking suffering

This album is so fantastic. Their subtle use of melody is really great. Band gets better with every release.

"if lined up in a blindfolded hardcore taste-test" go ahead. i'll use my ears

But members of both can be seen in the same city.

if you thought the first Gaza record sounded like Norma Jean, you are f*cking retarded.

shit is so nasty, this album is bummer city though, really sad tones throughout.

k fist of all. these dudes are not "scene" second of all this music is way far beyond ur ego genere bullshit. i dare u to look up the lyrics from this band. they are seriously trying to talk about shit that matters. so f*ck ur dumb asses u cant listen to music. for music. ur all about face value genere bull crap. f*cking consumer americans. god f*ck

am I the only one who liked the first album better? sure there's a bit of metalcore in there, but have you EVER heard a more misanthropic album?

k fist of all. these dudes are not "scene" second of all this music is way far beyond ur ego genere bullshit. i dare u to look up the lyrics from this band. they are seriously trying to talk about shit that matters. so f*ck ur dumb asses u cant listen to music. for music. ur all about face value genere bull crap. f*cking consumer americans. god f*ck <--------- Dear fellow Lambgoater, Go read a book some time. Sincerely, Ryan Gosling

As I drove by a deer carcass someone had cleanly taken the head off of. I thought of you. I knew you'd find it full of wonder. Someone had desecrated a corpse for a sportless opportunistic skull trophy. That alone is some hillbilly shit. The bigger picture is that we've lost feeling in our left arm. I guess there's no real evidence that we ever had any. These lyrics suck terribly. I mean...OMG I luv this band. Profund lyricz!