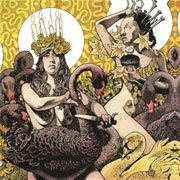 YELLOW 1. Yellow Theme 2. Take My Bones Away 3. March to the Sea 4. Little Things 5. Twinkler 6. Cocainium 7. Back Where I Belong 8. Sea Lungs 9. Eula GREEN 1. Green Theme 2. Board Up the House 3. Mtns. (The Crown & Anchor) 4. Foolsong 5. Collapse 6. Psalms Alive 7. Stretchmarker 8. The Line Between 9. If I Forget Thee, Lowcountry
2012 Relapse Records
Our score 8
by Joshua
7/19/2012
The Baroness you know and love is gone. Let's just get that over with right off the bat. You've probably heard a track or two by now and thought, "that was OK, but I can't wait to hear the heavy stuff." Sorry to be the bearer of bad news, but that IS the heavy stuff. Yellow & Green is a hard rock record, with nary a hint of Baroness' old sludge metal sound on the entire disc... wait, make that TWO discs. Like it or not, Baroness is about to cross over from the hipsters' favorite thinking-metal band to the metalheads' favorite indie rock act. Despite that fact, Yellow & Green is an inspired collection of music, albeit one on the softer side. Yellow features more of the straightforward fare. Beginning with lead single "Take My Bones Away," this might be considered a "classic" Baroness track if not for the baritone vocal delivery. "Little Things" could easily be a Foo Fighters cut. "March To The Sea" is burly, but poppy with a flurry of guitar pull-offs hidden beneath a big chorus. A swirling 70's psychedelia permeates "Cocanimum" complete with a retro-fuzz refrain and booming Bonham-esque drumming. Yellow concludes with "Eula" a number thick with sadness. The brooding dénouement is a fitting finale, prepping listeners for the album's second side. Green is a lighter and more "experimental" affair. Opener "Green Theme" distorts a standard jazz chord progression. The bouncy bassline of "Board Up The House" complements an Indian-influenced guitar lick ala Blue Record's "Jake Leg." The following "Mtns. (The Crown & Anchor)" and "Collapse" pacify once again with gentle finger picking and breathy vocal harmonies reminiscent of the moodier Beach Boys songs. "Psalms Alive" is based around a 90's style electronica-inspired drum loop before becoming a giant rocker. The double album concept makes for a bold statement piece and is an enormous musical achievement, but Yellow & Green isn't perfect. "Back Where I Belong" is sappy and disjointed. "Sea Lungs" pushes the vocals into warbly territory. "The Line Between" teases with a heavy intro but falls short of expectations and Green's instrumental finish "If I Forget Thee Lowcountry" underwhelms. Saturated with multiple guitar tones, effects, and other textural instruments, along with a variety of identifiable influences and an abundance of chops, Yellow & Green succeeds as a cerebral and surprisingly hooky listen. Instead of long oblique passages, these songs all have very conscious trajectories and while there may be a lack of audible rage, they still carry the melancholic weight fans expect from Baroness. Bottom Line: Yellow & Green requires more than a few spins to fully absorb its gravitas, but thrown into a playlist with Red and Blue they fit right in and help to better balance the broad spectrum of Baroness' discography.

Love the album. I have their first two, and a gajillion other albums if I want heavy stuff. This album, albeit unexpected, is a welcomed change.

Amazing from start to finish, my son will grow up saying my dad made me listen to baroness all the time.

This album is going to piss a lot of closed minded people off. I'm sure there a lot more people, who actually listen to more than one style of music, that will appreciate it.

All of their CDs are amazing and I hope the closed minded people expand their horizons on music.

yeah "thinking", something you can't do

there is no such thing as one music that makes you think over another. there is no 'thinking-metal'

I love my heavy shit too... but this album is amazing people. Give it a shot.

Unexpected, yes. Satisfying, almost; I would have liked a few more heavier tracks to balance the softer stuff, but it's still a decent (double) album.

They grew up. Everybody knows that metal is for pre-teens. Whats next, shooting for some radio play?

i listen to more rock than metal. the problem with this record isn't that its not heavy enough, its that its boring as f*ck and watered down. baroness hasn't been good in years, so no surprise.

These guys haven't been any good since the Third EP/Split with Unpersons. This is no different.

As soon as they started posting the new songs, it was clear this was gonna be different. I am completely onboard with the change,even though those first two albums and ep's were crushing and i'll always wonder if there was more they could have accomplished as a metal band. BUT the elements that made them an awesome metal band are still here and now there just an amazing rock band, the album is a slurry of honest and interesting riffs and passages and I am curious to see how they will progress.

i'll be a baroness hype forever so I think this album is great. There are infinite bands to listen to so I don't necessarily expect or need to be wowed and blown away by every single one of them, not to say I don't think this a great album(s) in it's own right, even if it's a departure from "classic" Baroness. It adds to their already varied discography and in my opinion, is exactly where you'd expect them to go musically. Good shit.

The songs are good but they are NOT great. They're hollow and meander for most the songs then BAM! Badass solo! Please listen to the whole album then put on The Blue Album and see/feel the difference in the power and emotions of the songs. They damn near make you want to get up and "ride" BUT the songs from Baby Poop colors just are stagnent and stale that repeat a lot of the same ideas and cord structures from there last albums but just in the most bla way possible and with no passion.

So lets get down to it, The new Baroness album is weak and boring. If we're going to talk about how "great" this band has become lets also talk about how "great" Nickelback is and also how "awesome" Bon Jovi is as well. These bands have a vast amount of fans and make plenty of cash for the whole band and I say kudos to them. Hell I love Bon Jovi's Slippery When Wet album!

stop listening at blue and seriously it sound like metallica load reload explode era.... sad but true its sucks

I love the assumption that if you hate this record you're close-minded. No I hate this record, because it's watered down, garbage from a band that was once great. I listen to more non-metal bands than I do metal. I was hoping for an amazing album, possibly even some thin lizzy influences, but what I got was a disappointment. It's as bad as all of the music that is played on popular radio stations under the moniker alternative rock.

I can't say this album is disappointing. That would imply I actually expected it to be good.

This is what happens when you have Shitallica's management getting a band all starry eyed, these dudes will be embarassed after the "dust" settles and their hype runs dry ...

This album is a masterpiece of composition, melody and hooks. Only a truly cohesive band that has put in their time together could put aside their egos and write for the song. To bad most of you are too cool to hear it. Hats off to Baroness!!

This album is garbage.

baroness....i loved you. now..i think its best if we just be friends.

What a let down this album was. I even preordered the vinyl. Now I'm stuck with a beautifully packaged album I'll lever listen to again. Hopefully they get heavy again, I can't stand this skinny jeans, Baroness trying to be the Beatles crap.

@ the masterpiece and being to cool to hear it.. I've tried multiple times to listen to the entire album (Love bandcamp!) but I cannot get through it. It's different but it is simply not good.