The Ghost Inside Get What You Give 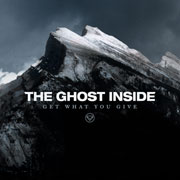 01. This Is What I Know About Sacrifice 02. Outlive 03. Engine 45 04. Slipping Away 05. The Great Unknown 06. Dark Horse 07. White Light 08. Thirty Three 09. Face Value 10. Deceiver 11. Test The Limits
2012 Epitaph Records
Our score 5
by Brian Shultz
7/13/2012
The Ghost Inside have been making their name for a few years now on a pulverizing strain of metalcore that seems to wed the murky rumble of nü-metal with the thuggier, chest-beating movement of tough-guy hardcore (though frontman Jonathan Vigil's lyrics tend to deal more with empowerment and personal tragedy than street justice or literal threatening). The band's progression has seemed to find them grow increasingly heavier and meaner, both musically and vocally. Get What You Give, the big debut for their hometown label Epitaph, is no exception, but it's also far more versatile than the band's other two full-lengths. It also, however, finds the band remaining plagued by a number of undesirable traits. Opener "This Is What I Know About Sacrifice" might be the most memorable track on the album, but for all the wrong reasons: Namely, its inherent, unintentionally comic value. Vigil menacingly growls the song's title, then tells the listener, "Meet me at the crossroads—LET'S GO!" And immediately, there's a breakdown. 17 seconds into the record, there's a breakdown. And of course, a couple of "OH!"s...and the sound of a gunshot. If one loves breakdown-heavy, thuggy metalcore, they've already been clued in that this record is for them. For the rest of us that can only laugh at its cheap employment, it's not the most convincing start to the record. Like much of Get What You Give, the song takes the metallic slant of mosh-laden, street-wise hardcore of a progenitor like Merauder and exaggerates it to a disappointing degree, and neither Vigil's clichéd approach nor the strangely fat, nü-ish low end helps. Whatever one wants to call "this," they do "this" well, but "this" has been done to such absolute death there's almost no original thought or feeling to it. If there was an intelligence scale for (vaguely speaking) modern metallic hardcore, these guys lie almost exactly halfway between Converge and Emmure. At the very least, there's an occasional counteraction to the brute force of Vigil's bark and the band's insistent pound. They try a sort of strained, melodic singing to add some color to their songs; it's mildly corny, but it does add some faction of dynamism to Get What You Give. It sort of conjures up post-Wake the Dead Comeback Kid, so it makes sense when CK frontman Andrew Neufeld guests on "Face Value." A couple of faster paces and tempo changes (the almost enjoyable post-Shai Hulud mode of "Slipping Away," "Dark Horse" and closer "Test the Limits") add a shred of musicality to the proceedings, but the band usually ruin it with needless, mind-numblingly stereotypical mosh parts. The momentary restraint of "White Light" is a nice touch. Bottom Line: Get What You Give is the most versatile and competently played record in the Ghost Inside's canon, but it remains bogged down by adopting almost all of the clichéd musical and lyrical techniques of its given style. On the song "Face Value," the band states, "This will not be the new revival." We can only hope.

i usually dont really care about much hardcore but this review sucks. this is one of the best bands in the genre. definitely deserves at least a 7.

well first off bud, this isn't hardcore. This is metalcore. and didn't the acacia strain already put out this album?

it sounds nothing like acacia strain. not even close.

^ f*ck you and the acacia strain

what a creative use of the arrow

sry gays they only got what they gave.

This album was mediocre. The last one was a thousand times better!

if there was a god, which there is not, he would smite these mediocre f*cks

If one loves breakdown-heavy, thuggy metalcore, they've already been clued in that this record is for them. For the rest of us that can only laugh at its cheap employment, it's not the most convincing start to the record. Wow this review sucks.

shit review from an even shittier reviewer. While I will agree the bass drops are annoying after a few listens, This album overall is a grower and a huge new direction for their sound. Returners was amazing, but there is no possibility they could have recreated it.

last album was pretty sweet, not crazy about this yet but it may grow on me. what happened to all the good bands? i think the best hardcore album ive heard lately is that hundredth "let go." open for any suggestions if you all know some decent new tunes...

f*ck this review. Look at the user rating. This album is sick. Band is sick. Will be attending warped tour to see this band.

I would try to say something witty about the reviewer but I don't have to. He reviews music he doesn't make it.

I'm pretty sure this reviewer hasn't heard any of the bands he's comparing Tgi to. Also how is "clean" melodic singing thuggie when it sounds like adtr. I'm very confused by this review from the way It was described I think he put in a rag men record and not the newest record from Tgi?

look at the new wave of lamgoat gays... user rating = 8? kill yourselves gays

The amount of heart on this album, is unbelievable. The Ghost Inside is known for having heart felt lyrics, inspiring riffs, and emotional heaviness.The message that Eric preaches comes through stronger on this album than any of their other previous albums' messages have. After reading the lyrics, realizing how well they've done without a drummer, and feel the message, I can say that I don't give a shitt about 808 drops, or what the opening lyrics were. Glad I BOUGHT it.

Doood ur obviously not a ghost inside fan if u think this is they're "most versatile album" u need to hear something besides this watered down studio bullshit yu probably dnt know what fury and the fallen ones is huh??

i dig the band, but realizing all these pussies are butt hurt makes me hate being a fan. devil wearz praada fans now have something to listen to apparently

looking for a sick ass new album to listen to (worth listening too) ... check out the new DYING FETUS album "Reign Supreme"...any fans?

This review does not give the album(or the band) justic. They are a part of a genre that is booming and have very loyal fans. Why should they not be cliche in their own genre when it is cleary the sound the fans want to hear?

I think that whoever is reviewing alot of these albums is a little too critical. Whatever just happened to listening to some music, and if you like it, cool. Now everyone tries to decode every part of every album. Just frustrates me.

The Ghost Inside Album Reviews